He wore green satin shorts with a white star, and was promoted in boxing circles as Puerto Rican rather than Aboriginal, because of racial prejudice at the time. 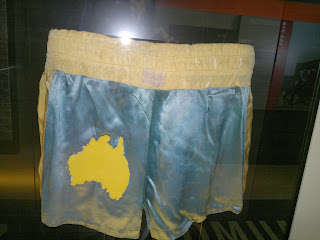 
Boxing has never interested me much. Yet even I can appreciate that 97 wins (a phenomenal 62 by knockout), 10 losses, a draw and two no contests out of 110 fights[1] in just 11 years is something truly exceptional.

Dave Sands was a Stockton family man who grew up on the Burnt Bridge Aboriginal Mission out of Kempsey. Tom Maguire was a Newcastle training legend with a boxing gym at 187 Beaumont Street, Hamilton.

Both men died with unrealised dreams.

This is the story of a remarkable partnership, and an estrangement that likely changed the course of the careers and lives of them both. 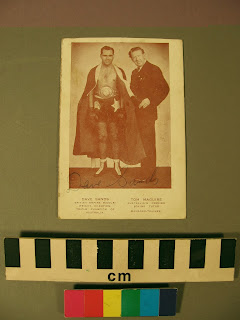 
These stories have been well told. (It is easy to find them on the internet – my references are listed at the end of this post). Between the lines, however, lie puzzling threads, the truth of which will never be fully known.

In 1952, Dave was just 26, with a wife and three young children, another on the way. He died when the five ton truck he was driving failed to negotiate a bend near Dungog.

Boxing writers describe him one of the greatest boxers never to have won a world title.

Tom Maguire took 15 year old Dave on at his Beaumont Street gym, where the boy lived with other boxers in training, including his older brother Percy.

In 26 years associated with boxing, Tom Maguire trained 22 Australian champions, one Australasian champion and one British Empire champion. His greatest ambition was to guide one of his protégés into a world title.

Tom Maguire died in poverty, of ill health and too much alcohol, but without self pity. He was 76.

Two plaques testify to his achievements and the esteem he once enjoyed.

One is at the site of his gym in Beaumont Street, opposite the Racecourse. 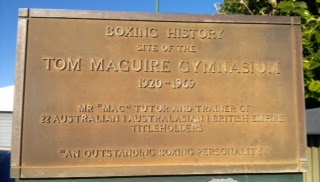 Another is on the external wall of the Northern Star Hotel, Hamilton. Here, Maguire's boxers presented regular display matches to entertain the patrons. 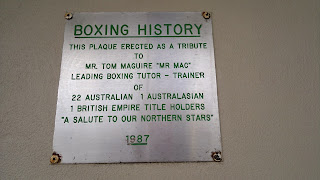 
When Dave Sands died, shock waves and accolades swept the country. A public appeal raised enough funds to pay off his family home in Stockton, Newcastle and create a trust fund for his family. The thousands of people at his funeral tell the story of his popularity. 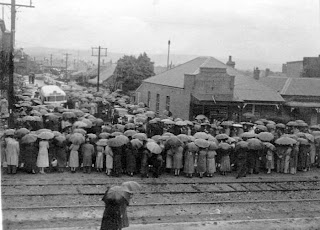 
Despite his success, most of his money had gone on manager’s fees, travel costs, family expenses and generosity to his kin.

I like the contradictions in the man. Dave Sands “was fast and quick-thinking, full of front-foot aggression and fierce counter punching. He had the best left hook of his peers.” [2]

At the same time, the young boxer was widely respected for his quiet manliness and dedication. He was modest and shy, fun loving and a good provider, even helping with domestic tasks such as sewing. His handsome features were unscathed.[3]

He was just 19 when he married 18 year old Bessie, who said:

“He was a gentle soul, a gentleman. We had only seven years together.” [4]

When his fatal accident occurred, Dave and his brother Alfie were on their way to a timber cutting job. This was their way of getting fit before an upcoming fight. In between fights, Dave worked at timber cutting and as a truckie. He was no slouch.


When Dave Sands died in 1952, his childhood home at Burnt Bridge, Kempsey was still under the control of the Aborigines Welfare Board. There was no electricity at the Mission, but there was talk of getting it connected so a motion picture projector could be purchased to entertain school children and young people.[5]

A Dunghutti man, Dave Sands was born in 1926. His father George Ritchie, a rodeo rider and timber cutter, was a boxer. Dave’s maternal great-uncle Bailey Russell was a noted bare-knuckle fighter. Dave and all five of his brothers must have inherited the “right” genes for boxing fame.
The six boys boxed under the name of Sands, a name taken by Dave’s older brother Percy after ‘Snowy’ Sands, a local railway guard and boxing fan. Known as The Fighting Sands, they became one of Australia's greatest sporting families. 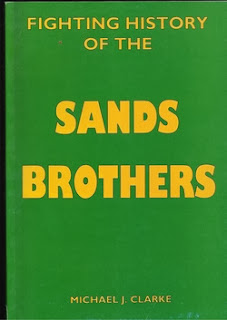 
Soon after Tom Maguire took 15 year old Dave under his wing, the victories began to roll in.

By the end of 1942, when Dave was nearly 17, he had knocked out a dozen opponents in Newcastle.

By 1946, he was boxing twelve-round matches before up to 10,000 people in Sydney and Brisbane. In May that year he won the Australian middleweight title. Three months later he became national light-heavyweight champion.

Success did not go to Dave Sands’ head.

On one occasion it was said that after Dave won a fight, the managers celebrated all night but Dave had disappeared. He was taking the train home to Newcastle. His idea of celebration was to buy two meat pies instead of one - one to eat while waiting for the train, the other to eat while travelling.[6]

By 1948 he had defeated all his local opponents and most American ‘imports’. Sands and Maguire set their sights on a world title.

In September 1949, Dave Sands won the British Empire Middleweight Boxing Championship title in 165 seconds, fighting Dick Turpin. It was reported to be one of the most sensational fights seen in Britain up to that time.

So media shy was he that following his win in Britain he was sent to Paris to avoid the throngs of well wishes and autograph hunters. [7]

Sands’ triumphal return to Australia was blunted by a serious accident, when the steering of his motor car failed. His time was not yet.

Over the next 18 months, Sands won nine fights, including the Australian heavyweight championship in 1950.

With these successes, Sands had become a leading contender for the world middleweight title. What happened over the next year or so would be critical.

Maguire was still managing Sands, and was at the height of his training career. Dave Sands was his greatest star.


With his eyes on the holy grail of boxing, a world title, Maguire was attempting to arrange a bout for Sands with the American middleweight champion, Sugar Ray Robinson. Nothing was transparent in the murky world of international boxing promotion, where one-upmanship meant huge financial windfalls. Maguire missed a critical chance, and he and Sands fell out. The partnership ruptured.

We don’t know exactly why the two men became estranged, although it is said to involve money. Perhaps Sands felt he was not getting what he was worth. Or Sands lost confidence in Maguire’s negotiating skills. Neither were rich men.

Sands found a new manager, Bede Kerr. Although Kerr persisted with the negotiations, he did not succeed at that time.

Dave’s sudden death in 1952 shocked the boxing world. The announcement made the front page of the Sydney Morning Herald on 12 August, 1952. 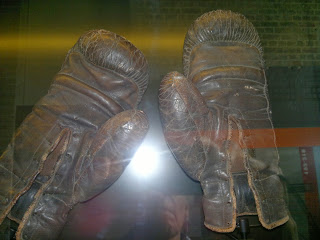 The irony was that at the time of his death, Dave Sands was training for the much sought after world middleweight title fight against Randolph Turpin. Sugar Ray Robinson had retired, leaving the title vacant.[8] British promoter Jack Solomons had cabled Sands direct with the offer of the title fight. Dave Sands’ dream could have come true.

A year later, when Carl Olsen stood in the Madison Square Garden ring after winning the world title said:

Maguire lost heart after this. From being almost a household name at the peak of boxing’s popularity in the 1940s and early 1950s, Maguire’s own star paled. He did little training. The paint on the sign that had been the “Star” gymnasium opposite the Broadmeadow Racecourse for almost 50 years faded until it was barely legible.

There is much more to the story of Tom Maguire than can be told here. Newcastle Herald journalist Mike Scanlon has written a compassionate portrait of Maguire’s life and final years – read it here. 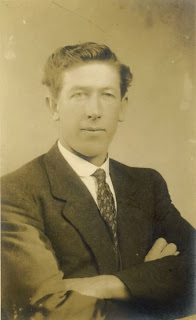 Dave Sands was inducted into the Sport Australia Hall of Fame in 1986.

In 1998, Australian boxer Chad Ritchie was invited to Los Angeles on behalf of the legendary grandfather he never knew. There, Dave Sands was inducted into the World Boxing Hall of Fame.[10]

At the commemoration of what would have been his 80th year, a plaque in Dave Sands’ honour was restored and re-unveiled in Glebe, Sydney, near a training gym he once frequented. Tom Laming Jnr, son of Dave’s friend Tom Laming Snr who had originally put the plaque in place, told the crowd: 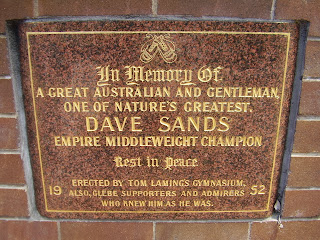 Memorials for Dave Sands can also be found at the Lynn Oval, Stockton, Newcastle; and in a rest park at Dungog, near the site of the car accident.

Yet it was in Hamilton, in a humble gym and cottage at the southern end of Beaumont Street, where two men – boxer and his coach - dreamed dreams, hatched plans to take on the world, trained like demons, and recovered from their 60,000 miles of travel in pursuit of a world title.

In the Newcastle Museum, an exhibition on multicultural Beaumont Street, Hamilton includes a panel about Maguire’s boxing gym, and his star recruit, Aboriginal boxer Dave Sands.

In this exhibition, memorial to a legendary partnership, a partnership of legends, they are together. A Museum curator took the matter in hand, and I like to believe that the two men are reconciled. 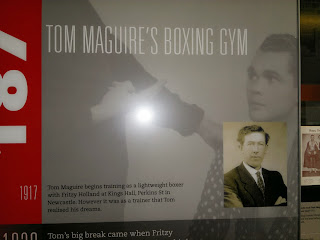 My thanks to Julie Baird, Deputy Director of the Newcastle Museum, who shared her passion with me for this story, and showed me that there is much more to boxing than I had imagined. 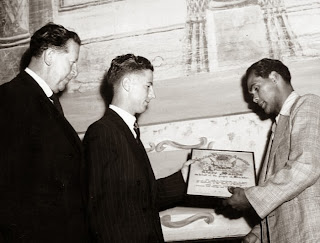