“Blow it up over my dead body!”


“A couple of days after the earthquake, I was at home in the parsonage in Beaumont Street when there was a knock on the door. I opened it to a policeman, who told me – the Army is about to blow up the church. They want you there!”

The last post Wesleyans of Pit Town showed how over the passage of some 150 years, the fluctuating size of the church congregation dictated decisions about buildings on the site. But there was another great challenge faced by the modern day church that had nothing to do with numbers, and everything to do with a natural catastrophe.

The 1989 Newcastle earthquake damaged the church building badly. Its landmark tower had collapsed, and the northern and southern brick walls had been blown out 7-8 centimetres into a precarious curve. The building could cave in at any moment, bringing everything down.


The church had been covered with plastic to keep out rain, and boarded up for safety. 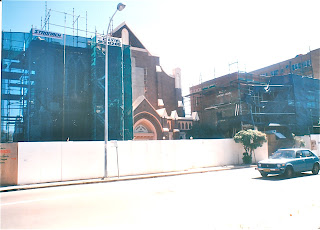 The custodians of the church acted quickly after the disaster. Suters Architects were asked to assess the damage. Church decision makers needed to expert advice on whether it would be worthwhile repairing the building – if not, they would have to begin all over again.

The Army had been brought in to help with the emergency response to the earthquake, and all over the city, buildings were being blown up. “They were having the time of their lives”, John told me. In all, three hundred buildings were demolished in Newcastle after the earthquake.

He resumes his story of what happened that morning.

“In a great flurry I rushed up Beaumont Street to see what was going on. There was the Mayor, the Army people from Singleton, the police – all standing around, waiting for the go-ahead”.

John describes how he confronted the group. “Over my dead body!” he declared with all the authority he could grasp. “We’re waiting for the architects to tell us if it can be saved – and they can’t get a cherry picker to get up into the roof because there isn’t a cherry picker to be had in Newcastle!”

A loud argument ensued. “We can’t wait”, John was told. Then, he saw a familiar figure approaching along Beaumont Street. It was Ed Clode, a Suters architect. John called out to him immediately – “I was never so pleased to see anyone”, John said.

Ed backed up John’s story. Leaving them in no doubt about the consequences of going ahead, John reiterated his position: “If you continue, I’ll go in there, and then you can blow it up”.

The Army sappers did desist, and probably went off to find an easier target. An old cinema, perhaps the Century – built 1941 to seat an amazing 1800 people.... 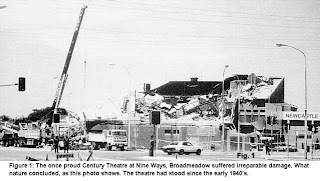 The church was repaired. The tower was restored.


In a delicate engineering feat, the bowed walls were eased back into position over many weeks of gentle pressure from huge strainer bars. Those bars have become part of the historical fabric of the church. 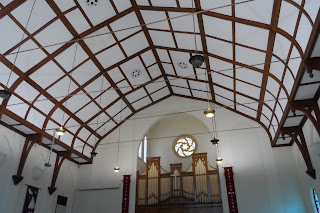 Interior view of Wesley-on-Beaumont, with the horizontal strainer bars just visible, and close up, below (2013) 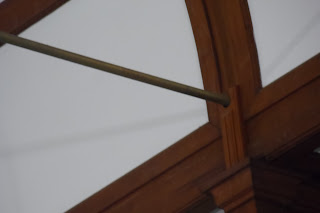 From the calmer perspective of his retirement years, John tells me:


“I do wonder whether I did the right thing. We were insured, of course, and could have rebuilt. We could have planned and built something more suited for contemporary church life. But there it is, that’s what happened”. 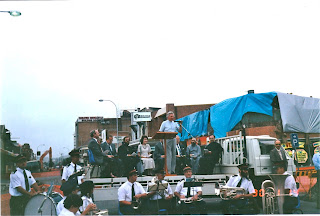 My thanks to Reverend John Mason and Mrs Mavis Ebbott for the story and photographs.