Last days of the Newcastle trams

Hamilton has a lively history as a transport hub. I am reminded of this when I drive past Hamilton Station, ever since the heavy rail line was truncated there on Boxing Day, 2014. Especially in peak hour, buses jostle for space along a cramped section of the Islington end of Beaumont Street, often queuing back into Fern Street. As the waiting buses belch fumes, passengers hurry from trains to their connecting buses for the city.

A kilometre or so south, in the relative calm of Denison Street, buses rest in the Hamilton Depot between shifts, or lumber noisily out the gate to be on their way. My young grandsons have loved watching the drivers arrive for work with lunch in their backpacks. The drivers always have time for friendly waves.

The Hamilton Depot, also known as the Gordon Avenue Depot, was once the home of Newcastle’s trams. I came to appreciate something of the role trams played in Newcastle’s transport history through Noel Reed.[1] Noel, now an octogenarian, was ‘on the spot’ to photograph the last years of the Newcastle trams, from 1947 to 1950. 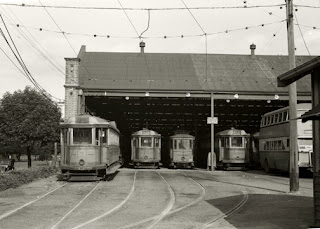 Newcastle’s first trams were operated by steam. Their introduction in 1897 followed the success of Sydney services and community agitation for something better than horse drawn buses.

Steam trams served Newcastle well for over 35 years, until the rather antiquated and inefficient system was electrified.

The first electric tram to operate in Newcastle was Car 274, crossing Hunter Street at 6.40 am on 4 December 1923. The main city terminus had a panoramic view of Newcastle Beach, situated as it was on a headland at Parnell Place.

Noel Reed’s fascination with Newcastle’s electric trams began when visiting his Welsh-born great grandmother Mary Griffiths at New Lambton in the late 1930s. Her small weatherboard house was just a block away from the Wallsend tramline. The Sydney lad loved watching the trams pass, and sometimes placed penny coins on the lines to have them squashed by the wheels.

Years later, in December 1947 – having completed his final year of high school – Noel visited Newcastle on a tram tour with the Australian Railway Historical Society and the Australian Electric Traction Association. Already a keen photographer, and the youngest in the group, he documented the tour.

Noel was to come to Newcastle on several more occasions in 1949 and 1950. He rode his 125cc Lambretta motor scooter on the notorious Pacific Highway from his home in Northbridge, Sydney. These were the last years of the Newcastle trams. The adventurous, tram-loving engineering student recorded their passing. 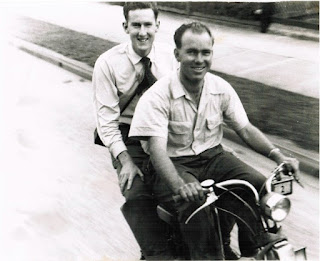 As the population expanded into the suburbs, and buses proved more flexible and efficient, a decision was made to close the Newcastle tramways. This was done in stages, beginning in September 1948 with the Mayfield line.

Closure of the long Wallsend line was unusual for a number of reasons. On the last full day of regular service, Saturday 5 November 1949, a crisis occurred when a truck broke down in Robert Street, Wallsend. Noel happened to be on the tram from Newcastle to Wallsend, and delayed by the mishap. He jumped off and captured shots of one of the blocked trams towing the truck off the tramlines. 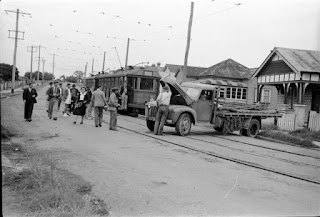 A tram’s journey is brought to a halt in Robert Street, Wallsend
Photograph by Noel Reed 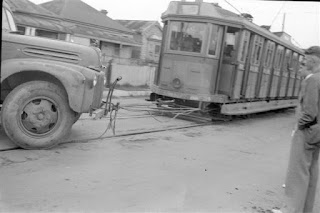 An all night service was still provided. Car 316 was intended to be the last service from Wallsend to Newcastle. It left Newcastle just after 1.30 am on Sunday 6 November, 1949 for Wallsend. There, it would stand until it was time to return at dawn (5.03 am) for Newcastle.

‘A small group of enthusiastic passengers remained with the tram until dawn on Sunday morning,’ says Noel. He was among them.

The return journey back to Newcastle was in the early morning light. 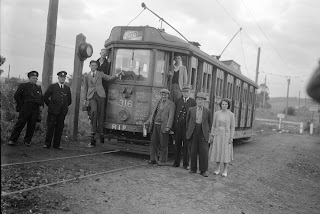 Crew, passengers and tram enthusiasts prepare to farewell Car 316 on its last journey from the Wallsend terminus to Newcastle, 6 November 1949
Photograph by Noel Reed

However, Car 316 would not be the last Wallsend tram, after all. Car 317 had met the Sydney bound Glen Innes mail train at Broadmeadow before departing at 5.25 am, and was overtaken by Car 316 at the New Lambton crossover. [2] So Car 317 was the very last tram off the Wallsend line.

‘I guess he was just doing his job.’ 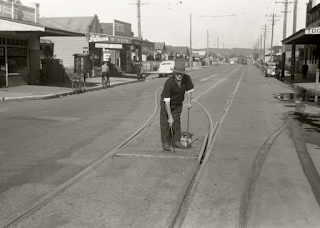 Conscientious to the end - maintenance ganger Tom Stoddart (1892-1964) attends to the points on the last day of the Waratah tramline.
His identity was confirmed by Margaret Stoddart on Lost Newcastle Facebook
Photograph by Noel Reed

Can we imagine what it would be like to see trams today, wending their way sedately through our suburbs? A photograph by Noel Reed of Car 285 at the Belford and Dixon Street, Hamilton stop
on 15 May 1950 is super imposed by Craig Smith on his present day image.
Noel’s 125cc Lambretta motor scooter is dwarfed by today’s much larger fig trees 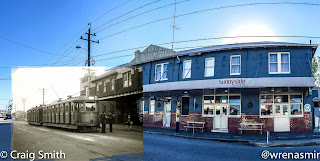 Another photograph by Noel Reed of Car 147 passing Sunnyside Tavern, Broadmeadow Road on 10 June 1950 is super imposed by Craig Smith on his present day image 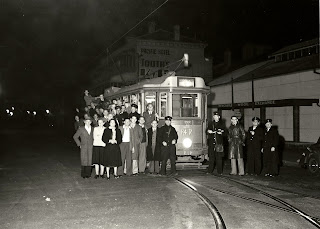 Final send-off for Car 147 at Telford Street, Newcastle after returning from Waratah
and before heading to Hamilton Depot, 11 June 1950
Photograph by Noel Reed

Car 147, the last tram on the Waratah line, had left Telford Street in the city at 12.36 am filled to capacity. It was followed by a procession of motorists blaring their horns. The tram’s departure from Waratah was celebrated by firing a giant sky rocket, which managed to hit some overhead wires and release a shower of sparks. Car 147, carrying a few enthusiasts, reached Hamilton Depot at 2.05 am. 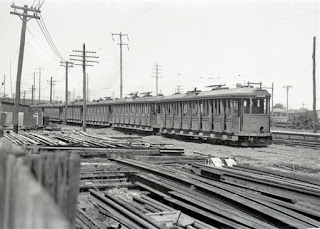 Thank you to Noel Reed, for generously sharing information and photographs, and to Craig Smith for creating ‘then and now’ composites.

An article ‘Recollections of a golden era of transport’ containing some of this information and written by Ruth Cotton was published in the Newcastle Post, Wednesday 11 March 2015.

[1] Noel Reed worked with the NSW Railways Signal & Communication Branch of the NSW Railways until the late 1980s.  His collection of thousands of photographs of trams taken in capital cities and regional centres across Australia includes hundreds taken during his visits to Newcastle. Noel Reed’s collection will be placed in the archives of the Australian Railway Historical Society.