At the end of last week’s post, I reflected on the lost hotels of Denison Street, and asked the question – why do some buildings endure, while others crumble or face demolition?

I found at least part of the answer in two local buildings.[1]

One used to be the Hamilton Fire Station in James Street, and the other the Mechanics’ Institute, on the corner of Tudor and Milton Streets. Each has a fascinating history.

It was May 1882 when the need for a local Fire Brigade was first discussed at a Hamilton Council meeting. Already some terrible fires had occurred. While the first brigade was established the following year, it was not until a decade later, in 1892, that it acquired a home – a tiny wooden structure (including a fire tower) that can just be seen in the photo below, next to the Municipal Chambers in James Street. Neither of these buildings have survived. 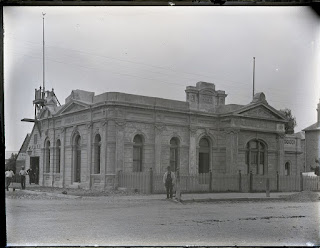 
That Fire Station proved inadequate, and in 1901, a new, single story fire station was purpose built for the cost of 300 pounds, also in James Street. A grand community opening was held. In 1906, a second story and belfry was added for a further two hundred and twenty two pounds. Yet another opening was held - Hamiltonians must have loved an excuse to celebrate! 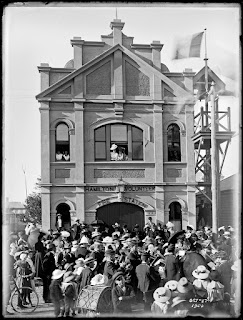 By the mid 1920s, the station had ceased to be used, and was converted to flats. The building was extensively damaged in the 1989 earthquake. Peter Murray describes what happened next:

“Saved from demolition, it was bought by Merve and Robert Lindsay, who restored and converted the building into an office and an apartment....Fortuitously a descendant of Sam Donn supplied a photograph to assist in the construction”.[2] 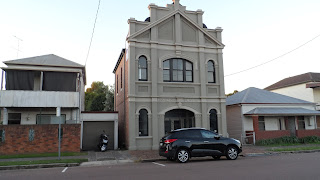 This graciously proportioned building, seen above as it is today,  bears the name Hamilton Flats, replacing the words Hamilton Volunteer Fire Station. Above the front door is a sculpture of a man’s head, thought by a local resident to have been King George V. In the event, it was found to be a likeness of Sam Donn, who had been Mayor of Hamilton in 1901. 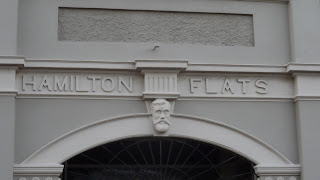 The restored sculpture of Sam Donn, above the entrance to the building
that was former Hamilton Volunteer Fire Station, 2013


The sculpture was painstakingly restored by Mervyn's father, Mr Victor Lindsay. Mervyn Lindsay explained in an email to me how Victor spent many, many months trying to fix the sculpture, and work out its identity.  At the last moment, photos were received of Sam Donn from Sam's granddaughter. Mervyn writes:

"The fragments recovered after the earthquake refused to fit any attempts to replicate George V, but of course worked perfectly for Sam."

We often walk past this building, admire its simple lines and appreciate what the Lindsays have done to ensure it endures.

The second building I want to tell you about is The Mechanics’ Institute in Hamilton. The wooden precursor to the current brick structure was built in 1862 – thirty years before the first Fire Brigade building was built.

The cultural history of the Mechanics’ Institute is every bit as interesting as the history of its building. I’ll touch very briefly on it here.

In the early nineteenth century, a time when education was the privilege of the elite few, Mechanics’ Institutes were set up in Britain and later, Australia. Their aim was to provide working men with access to technical education – through talks, courses, lectures and books accessible in a reading room. Since books and library subscriptions were beyond the financial means of workers, the Institutes filled this gap, expanding from technical subjects to the humanities, especially literature. Even debating was encouraged.

Eventually, in the late 19th and early 20th centuries, initiatives such as TAFE, free community libraries, adult education and compulsory public education for children made the role of the Institutes far less relevant.

Walking past the former Mechanics' Institute building in its unloved state, I feel so sad that this impressive building has lost its purpose 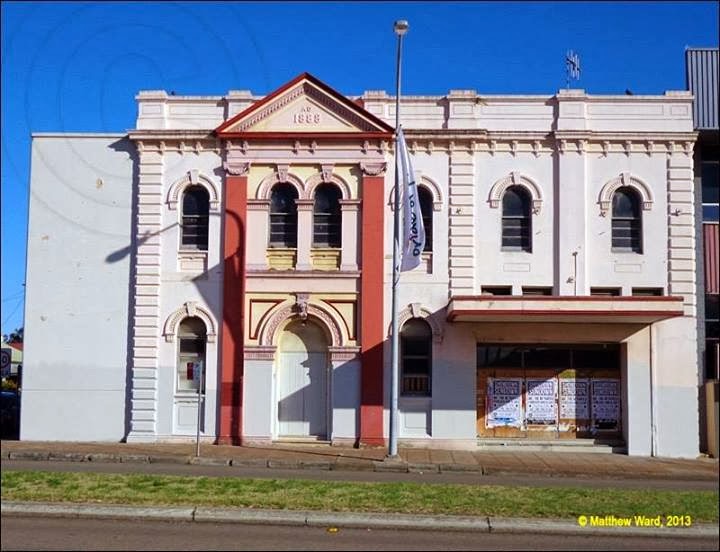 
The story of the Mechanics’ Institute building in Hamilton explains something of how the organisation navigated these changes in society.

The first modest weatherboard building experienced a troubled twenty plus years, financially and in terms of its role, from 1862 until 1888. Then, as a result of strong advocacy from some community leaders, a fine new building was commissioned on the same site. It was opened by the NSW Premier, Sir Henry Parkes in August, 1888.

Designed by Newcastle architect Mr F B Menkens, the Mechanics’ Institute was described as “the handsomest building of its kind in the district”. [3] Upstairs was a reading room with daily newspapers, a library, a meeting room, and a billiards room. Downstairs was a large hall to seat 400 people, with a stage. It must have been a marvellous resource for the growing community.

Three years later, in 1891, an extension to the building was completed, making it symmetrical in accord with the architectural plans. As with many buildings from the 1800s, the graceful cast iron lace verandahs have not survived. 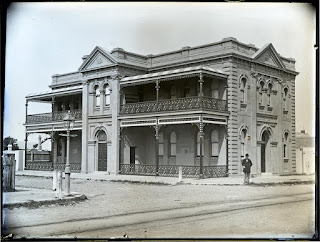 By the early 1920s, membership of the Institute was a healthy 800, and its educational role was changing to a recreational one as it became more like a community club. Income was raised through dances, musicals, motion pictures, hire of billiard tables --- until the growth of a range of other social clubs usurped this role, too. Once more, the Institute faced big challenges.

In the 1940s the Hamilton RSL Sub Branch purchased the premises, which became Anzac House, next to the RSL Club. It was intended to be used for the future expansion of the Club, which never happened, although it was rented out as a function centre at one stage.


Yet another organisation has had to cope with the changing times, and came off second best. 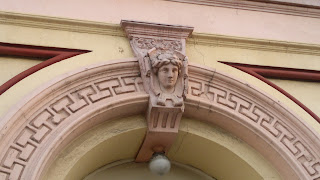 Effigy above a doorway today, in a deteriorated state, 2013


For a time, though, The Mechanics' Institute had served as a focus for many of Hamilton’s most important educational, social and political activities.


So what is the difference between the former Fire Brigade building, and the former Mechanic’s Institute? Why has one been able to be successfully reinvented, while the other languishes? Both are fine buildings, excellent examples of the architecture of their times.

1.    A solid structure, with durability – while brick is better than weatherboard, brick buildings can disintegrate, and both can survive.

2.    Aesthetic appeal which transcends the passage of time.

3.    Location that is still relevant to its purpose.

4.    Able to be adapted to a new purpose, if its former purpose is superseded.


The Mechanics' Institute has stumbled on Point 4, and crashed on Point 5. The Fire Station/Hamilton Flats ticks all points – most importantly, it has someone to love it.

In 2015 it was reported in the Newcastle Herald that the Hamilton RSL and former Anzac House/Mechanics Institute buildings were to be redeveloped by DJB Developments. Mencken Award winning architect Kevin Snell was engaged and has incorporated the heritage building into Atrium, a landmark residential apartment building. It was completed in January, 2018.

Another  story relating to the Volunteer Fire Station is at Whose Head is it, Really?