‘He knew every piece of fruit in the shop. If anyone touched anything, he could tell!’

I wondered how someone from the Aeolian islands in Italy’s far south, with the name Santamaria, happened to call his shop by the very English-sounding ‘Mac’s.’ 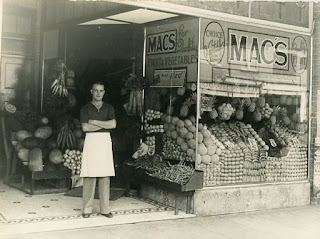 Norman Santamaria  in front of Mac’s Fruit Shop, early 1940s
The door at the left led to an air raid shelter, as it was wartime
Photograph from the personal collection of Julie Lomax

Norman met and married Giselda Cardenzana in Sydney; both had emigrated from Italy. Giselda was from the north, while Norman came from the south – he was born in Rinella on the Aeolian island of Salina. The couple moved to Newcastle, and ran what was then the Pacific Hotel, in Scott Street, Newcastle.[1]

Norman’s next business venture was in Hamilton, where he bought Mac’s Fruit Shop as a going concern. The name Mac’s was inherited from his predecessor – James  McVie, who also had a fruit shop in Hunter Street, Newcastle. 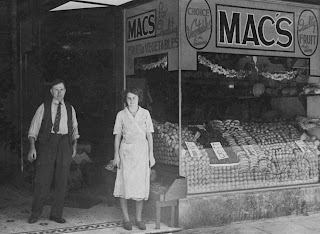 James and Lobelia McVie established their Hamilton shop in the mid 1930s,
having moved from Katoomba to make a fresh start after the Depression
Photograph from the collection of Julie Castles

Julie, Norman and Giselda’s only child, was just 8 years old when the family took up residence in the spacious  three bedroom flat above the shop at 138 Beaumont Street.

‘We all worked in the fruit shop,’ says Julie. ‘Dad was a typical Italian father – no after school play for me. I had to sweep the floor, bag up the potatoes, and soon learned to serve behind the counter.’

Before school, it would not be unusual to see Julie atop the delivery truck, helping unload the boxes of fruit. Another of her tasks was to string up the pineapples for the window display.

On Friday nights, late night shopping crowds surged along Beaumont Street. Sitting on the upstairs verandah, Julie and her school friends would compete with each other tossing peas into the trumpets of passing band members. ‘We loved running across the roofs, too,’ says Julie. ‘We’d go right over to Canning’s Newsagent at the back, in Tudor Street.’ 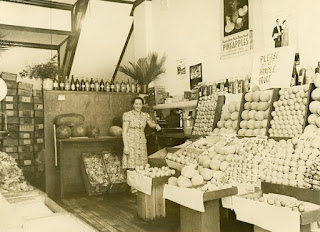 Norman took enormous pride in his arrangement of the produce. Julie doubts he would cope with today’s self service approach, and the way customers touch and handle the fruit to test its ripeness. 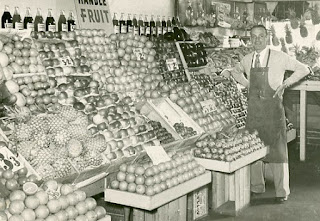 Locally renowned for his presentation skills, Norman was invited to create this display for the NSW Fruit Shopkeepers Association in Newcastle. 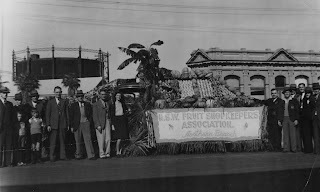 After selling Mac’s Fruit Shop, the Santamaria family’s next enterprise was what was then the Exchange Hotel, in Hunter Street. During that time, 18-year old Julie made her debut. 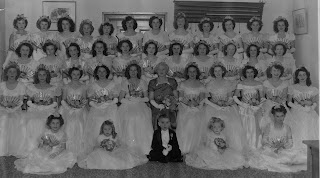 Coming out - debutantes in 1949, Masonic Ball, Hamilton
Well known Hamilton dance teacher Miss Lambert, who trained the girls,
is in the centre of the front row
Julie Santamaria is sixth from left, back row
Photograph from the personal collection of Julie Lomax

A block of land in Hamilton was Julie’s father’s 21st birthday gift to her. She married Fred Lomax, and they built a house on the block. Losing her husband suddenly in his early forties, Julie worked at everything from cleaning office furniture to compering fashion parades and advertising, and raised their two children. It would not have been an easy life for the young mother.

After the 1989 Newcastle earthquake, Julie happened to notice a sign near the Beaumont Street shop that had once been their family business. Information was being sought about the original structure and design of the building so it could be rebuilt as it had been before the earthquake. Julie responded, and as a result, met Peter Morris.[2] Peter had owned Harvest Health Foods at 138 Beaumont Street in the 1960s, and his parents had made the upstairs flat their home. Julie’s childhood memories of growing up ‘above the shop’ were put to good use.

When Norman retired, he and Giselda moved to Hawks Nest, where he bought a mobile fruit van. After a couple of years, he sold the business. ‘He couldn’t stand the kids messing with his fruit!’ Julie tells me. Norman went on to run a taxi service. No fruit to worry about there!

These well preserved family photographs of Mac’s Fruit Shop are around 75 years old. There is no missing the pride of this perfectionist fruiterer, and his family, as they pose in front of racks of skillfully arranged fruit. We can only imagine the glowing colours - golds, reds, greens, and yellows – and how painstakingly Norman must have unpacked and restacked so not a piece was bruised.

He wanted the best for his customers – and if that meant they had to curb their impulse to touch, and feel – it was so everyone could  experience  perfection. 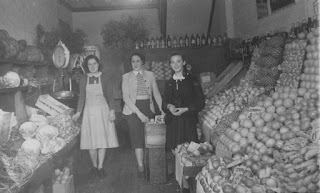 Inside Mac’s Fruit Shop – (L-R) a shop assistant, Giselda Santamaria, Julie Santamaria, early 1940s
‘We all worked there’
Photograph from the personal collection of Julie Lomax

Thank you to Julie Lomax for sharing photographs and information. 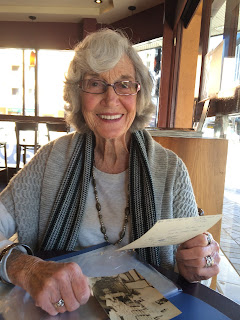 [1] A story on the Pacific Hotel and information provided by Julie Lomax featured in the Newcastle Herald on April 17, 2015, written by Mike Scanlon, see http://www.theherald.com.au/story/3016466/memories-of-the-pacific/
[2] Peter Morris OAM was Federal Member for Shortland from 1972-1998.
Posted by Ruth Cotton at 13:40 2 comments: