It was an announcement that struck at the heart of the tight-knit community of Italian migrant families that had formed around the Italian Centre, in Hamilton.

The Italian Centre (or the Bishop Scalabrini Centre) had been operating since 1966, for almost forty years. The calling of the Scalabrini Fathers, founded in Italy in 1887 by the Blessed Giovanni Battista Scalabrini, was to nurture the religious life of migrants and refugees, especially in their destination countries.

The shock announcement that the Centre would close within a month - in April 2002 - was made to the community by Father Vito Pegolo and confirmed by official letter. Dated 28 February, 2002, the letter was signed by Father Anthony Fragolent, Provincial Superior of the Scalabrinian Congregation, and the Most Reverend Michael Malone, Bishop of the Maitland-Newcastle Diocese.

A shortage and ageing of priests, and shifting of priorities to migrants with greater pastoral needs, were the reasons cited for the closure.

Two buildings had been bought and demolished at 42-44 Beaumont Street, [1] and the two storey Centre built in their place. The Italian community had raised funds for the purchase, donating labour, materials and the use of equipment. It was a labour of love. The Scalabrini Fathers provided legal, interpreting and advocacy assistance for the community.

After the announcement, the Italian community was furious. A protest was held outside the Centre and media attended. Cinzia Saccaro, now the Ethnic Communities Council Coordinator for the Italian Health and Wellness Centre, became involved with the group trying to save the Italian Centre for the community. As the Order held the title to the building, legally it was theirs to sell. Yet the community felt angry and betrayed as the Centre in which they had invested so much was ripped away from them. 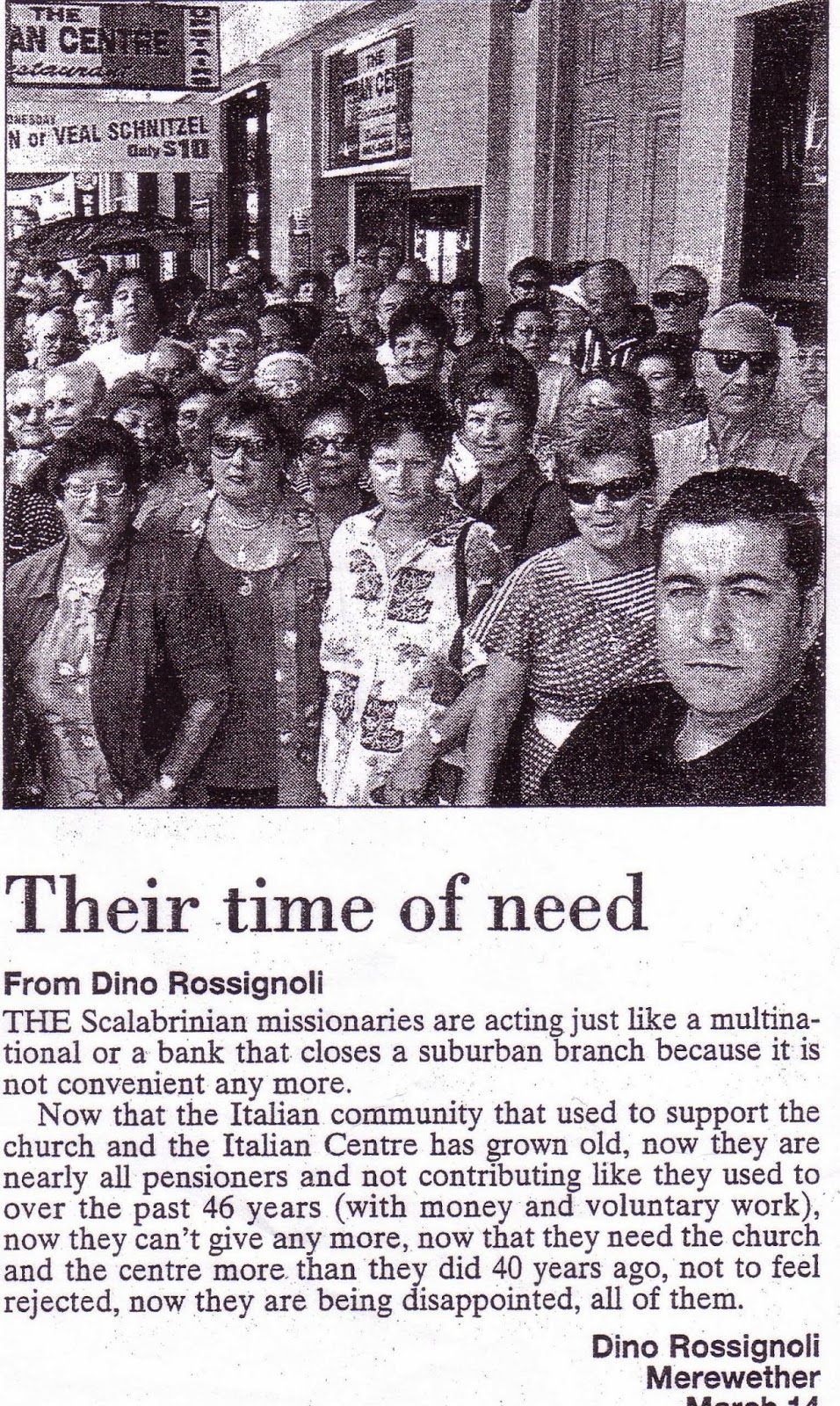 Protestors outside The Italian Centre, and letter to the Editor
express community anger
Newcastle Morning Herald, 15 March 2002, clipping from the collection
of Cinzia Saccaro


For decades, the Centre had been a social and spiritual hub for Italian-Australians living in Hamilton and nearby suburbs.


Upstairs was a large function room and kitchen. A chapel was tucked into an alcove at one end, and a stage was at the other. 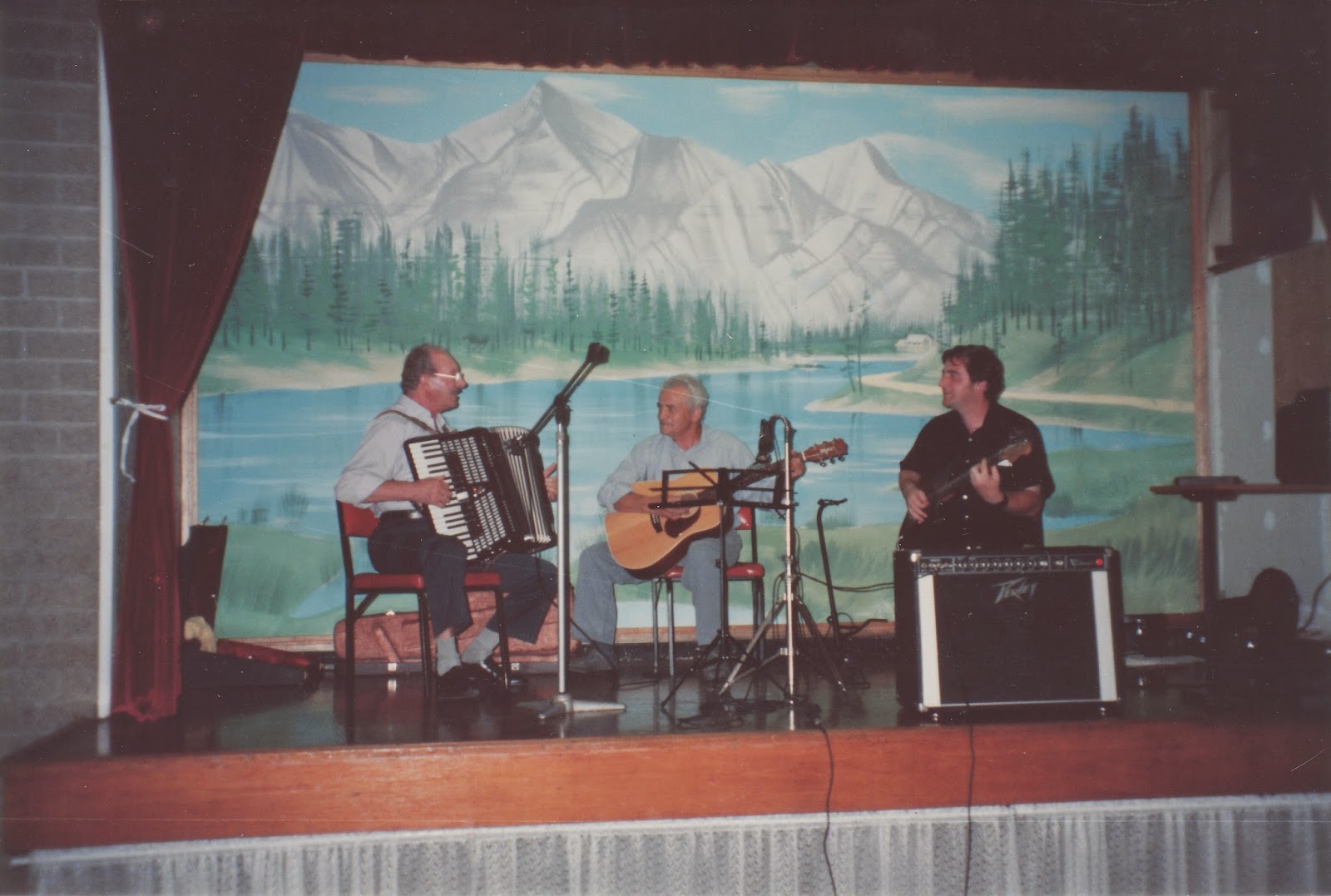 Musicians on stage entertain the crowd
G. Marchiori, D. Bucci, A. D Abruzzo
Photograph from the collection of Silvia Saccaro

Family dances were held on Friday and Saturday nights. ‘They were real family dances’, Cinzia tells me. ‘Parents, young people, kids. Everyone went. Many met and married after attending these dances’. 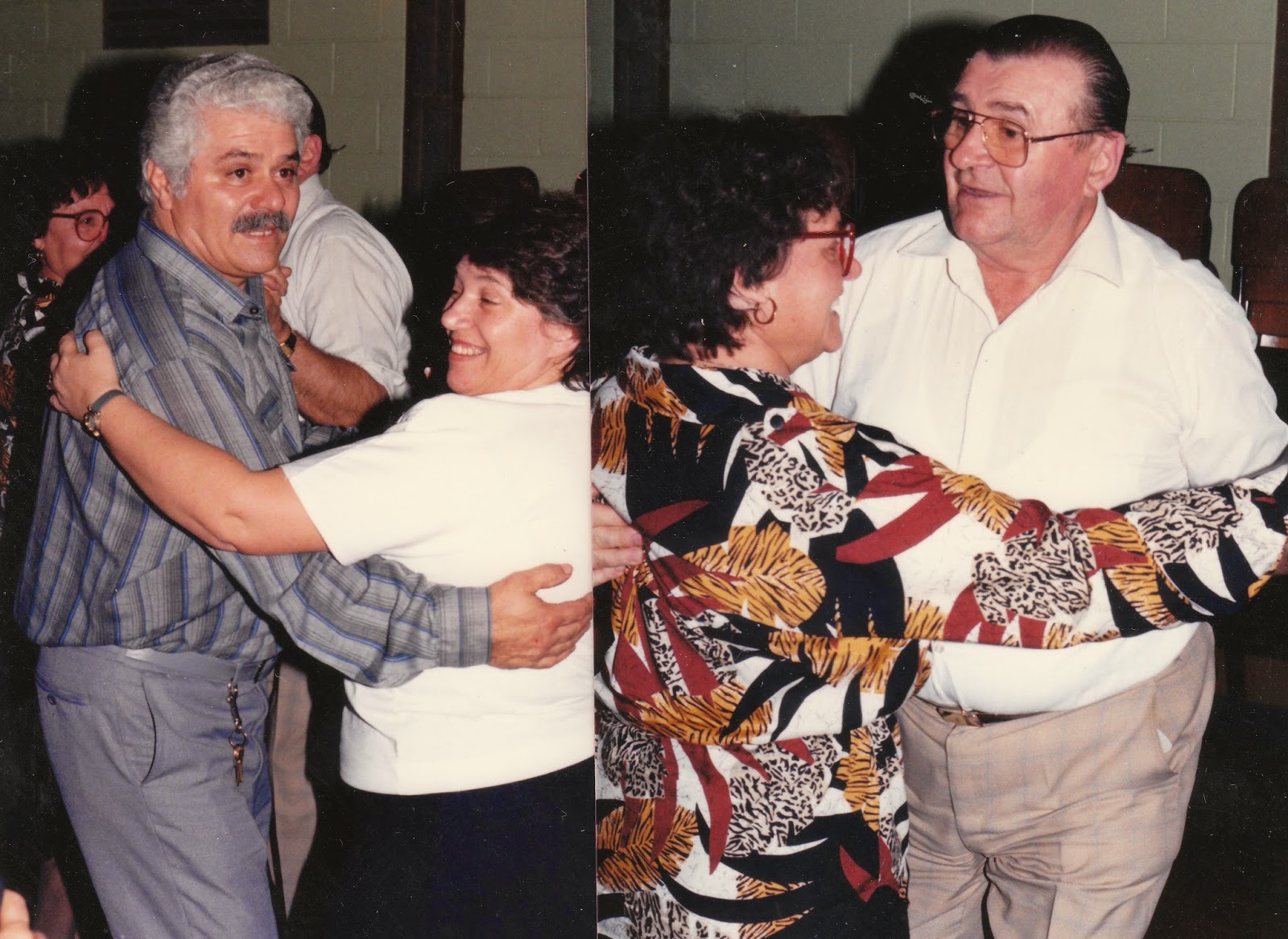 Dancers at the Italian Centre
Angelo and Lina Candia; Antonietta Carraro and Pietro Bandiera
Photograph from the collection of Silvia Saccaro

A second recreation room with a pool table, juke box, pinball games, and a quiet area for draughts and chess, was a draw card for young people.


Already, the function room was being hired out for functions such as weddings and parties.


To further increase revenue from the building, the recreation room became a restaurant in 1974. 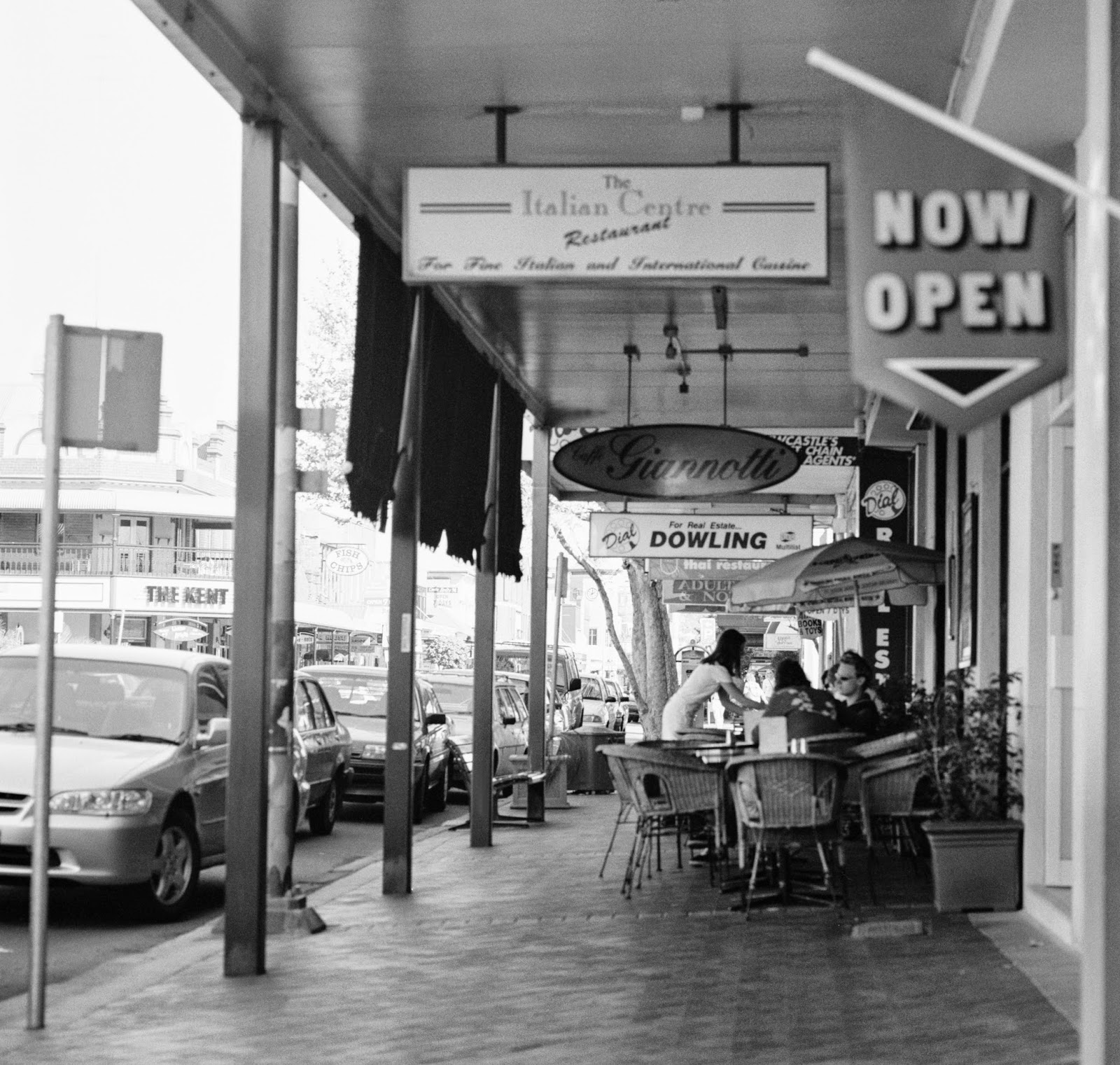 By 1979 a separate space had been created downstairs for the Chapel.


During the 1980s, the emphasis in the Centre began to shift to the welfare of ageing Italian migrants. The Ethnic Communities Council funded a Coordinator to ensure access to health, well being and social support services. Antonietta Carraro was the first appointment to this position in 1986, visiting elderly Italians who needed social contact, advocacy and support. Activities expanded to include meals, first provided by volunteers; later a cook was employed. 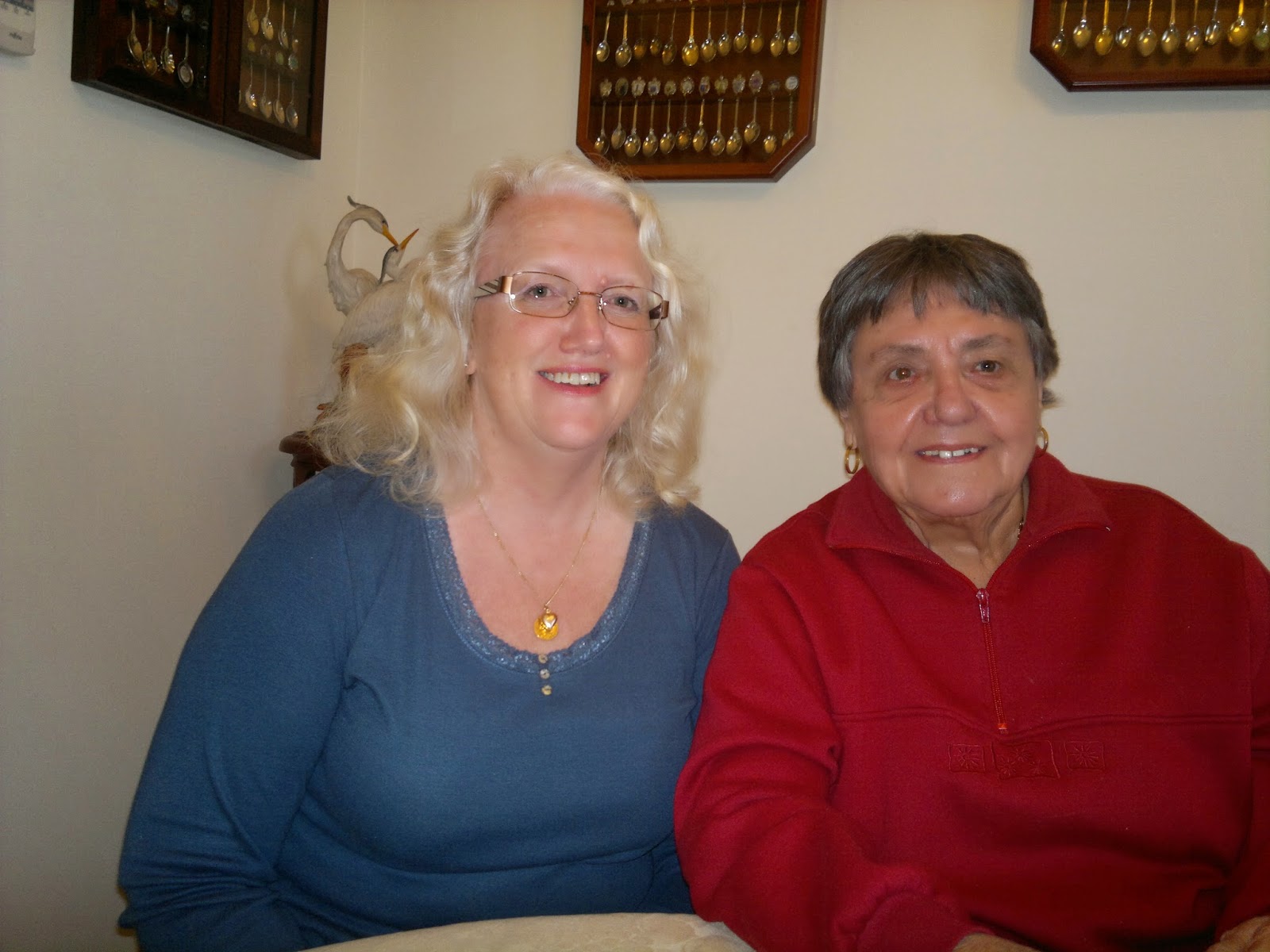 Antonietta Carraro (R) was the first Ethnic Communities Council Coordinator appointed to The Italian Centre in 1986. Cinzia Saccaro (L) is currently in the role, 2014.

In addition to this service, the Italian Centre also housed a small office on the ground floor of the building which was run by the Italian Community Worker. Bus trips to places of interest (especially with an Italian cultural connection) and a monthly social function were organised. This role also become heavily involved in providing advocacy for the community and help with completing various items of paperwork especially in relation to the Italian pension. This service has relocated to Broadmeadow.


This small office was also the seat for the Italian Vice Consul who provided assistance to Italian nationals with various legal and passport issues. That function is now in Carrington.


The potential loss of the Centre and all that it offered was a blow to the Italian community. As the sale of the building dragged on, negotiations continued for an alternative venue. Finally, one was found in a hall next to the Saint Laurence O’Toole church in Broadmeadow. 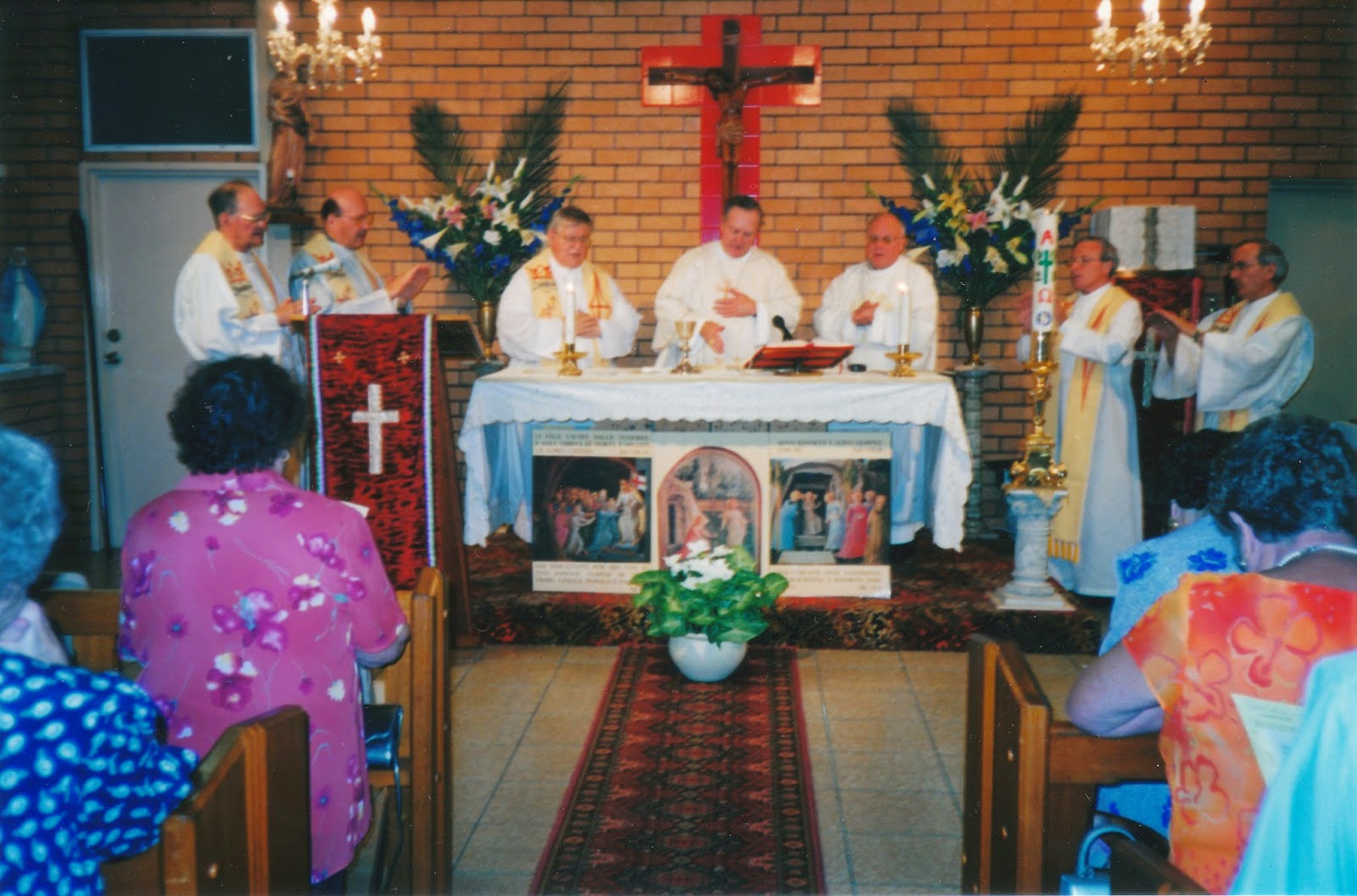 Bishop Michael Malone (centre), Monsignor Hart to his left and Father Francesco Lovatin and Father Vito Pegolo (at right) officiated at the final Scalabrinian mass in the chapel at the Italian Centre on 14 May, 2002.
Photograph from the collection of Silvia Saccaro


After a three year battle to save the Centre following announcement of its closure, the move to Broadmeadow was made. 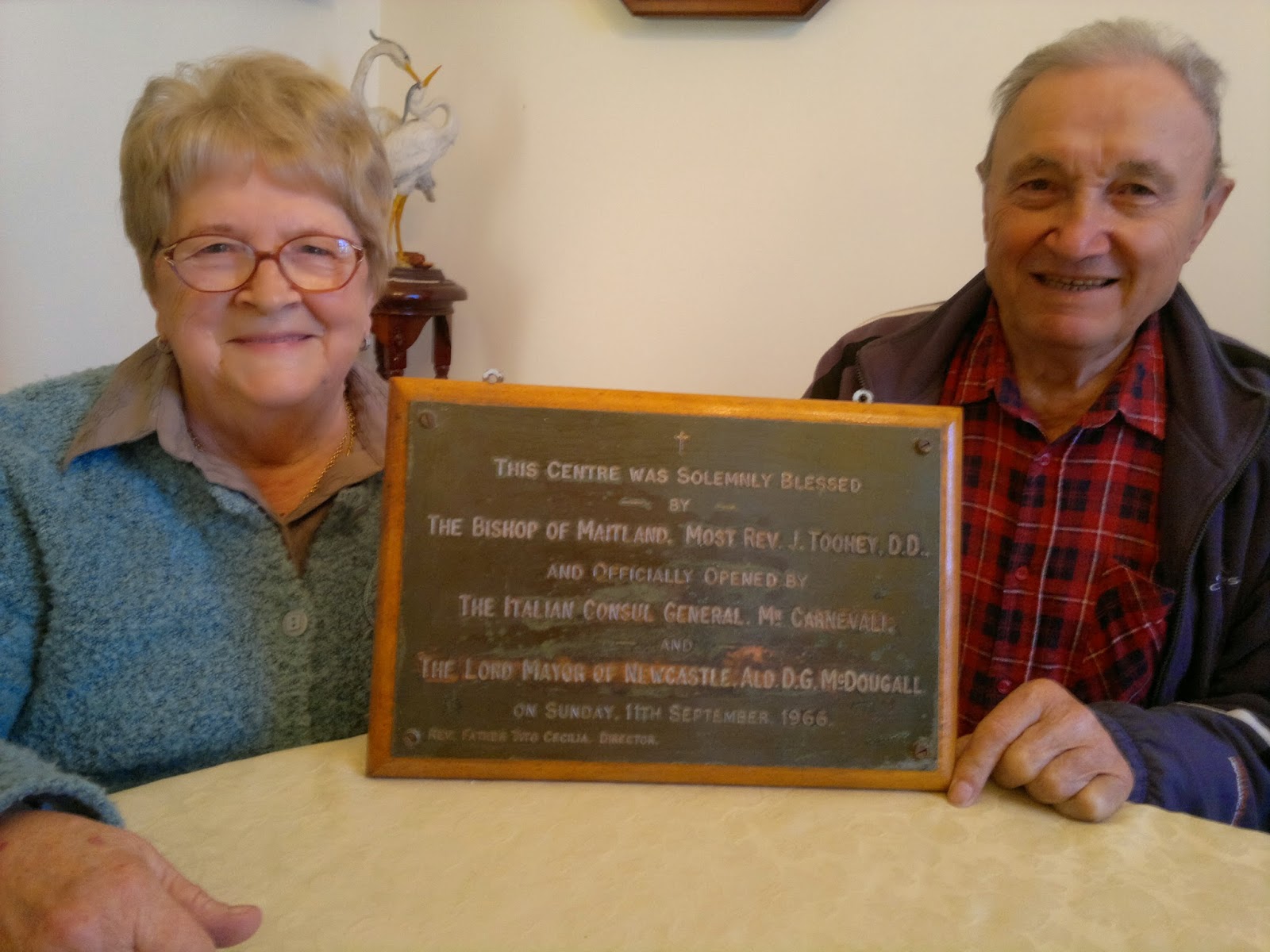 
Today, between the Associzione di Pensionati Italiani in Newcastle (APIN), the Ethnic Communities Council (ECC), and the Italian Welfare Organisation (IWO), Italian community volunteers together with paid workers organise social activities for over 100 ageing Italian-Australians from the Italian Centre at Broadmeadow.

Twice a week in the day care program, clients enjoy a three course meal cooked by volunteers, and play bingo or cards during the day. The majority are in their 80s, some in their 90s. 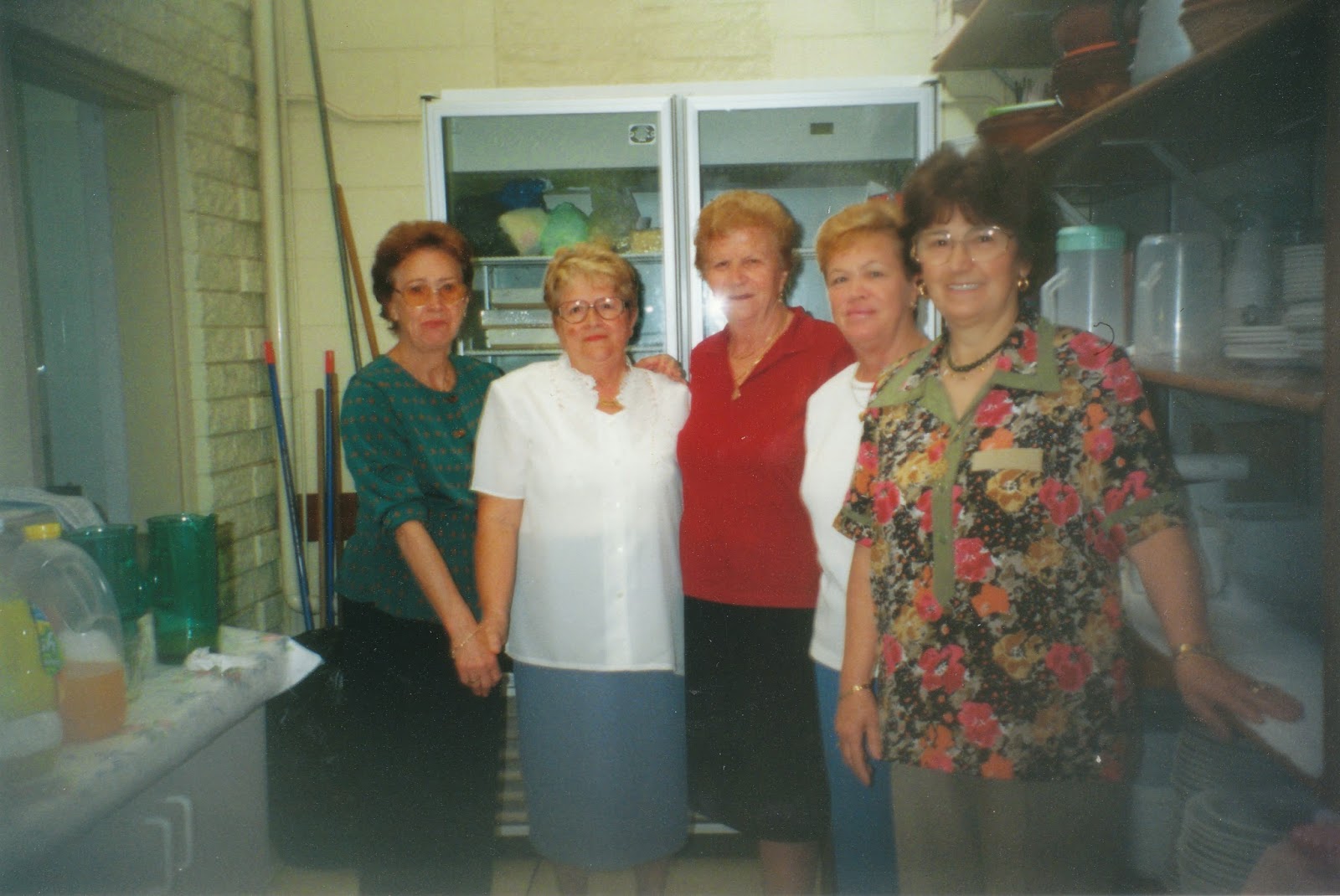 Cinzia is in awe of the strength and resilience of these ageing Italian-Australians. This is the last of the Italian generation that will need support linked to their cultural origins.


‘They’ve been through two wars and the Great Depression, they’ve migrated to a new country, struggled with the language, worked incredibly hard,’ Cinzia says. ‘Physically and mentally, they are so strong, so resilient’.


Even the loss of their beloved Italian Centre has not diminished these survivors. Drawing on that remarkable well of resilience they have, once more, adapted to change.

My thanks to Cinzia Saccaro, Silvia Saccaro, and Luigino and Antonietta Carraro for sharing this story and photographs.


[1] 44 Beaumont Street is now occupied by The Village Newcastle, and was formerly Cafe Giannotti.
Posted by Ruth Cotton at 18:56 No comments: