My personal quest to understand Hamilton began in 2013 when we moved here to live. I shared my discoveries through my Hidden Hamilton blog and Facebook page.

After the publication of my book ‘Hidden Hamilton’, based on the first year of my blog, I thought that was enough. I was wrong.

Ever since the book came out, in November 2014, people have been in touch with me: adding information to what I’d written, identifying people and places in photos, and suggesting ideas for new stories. More people have become involved, commenting on the Facebook pages of Hidden Hamilton and Lost Newcastle.

I've had more conversations, and met even more people with deep connections to my suburb.


Hunter Press has pre-publication special offers to purchase one or both books - the offer ends 19 June, when the book will be available at our usual outlets.

Go to http://hunterpress.com.au or enlarge the flyer at the end to see the details.

‘More Hidden Hamilton’ is rich with new stories of Hamilton places and people, ordinary and extraordinary. It also enlarges on a couple of very popular stories from my first book.

However, there is one enduring thing that remains with me after my exploration of the forces that have shaped Hamilton over more than a century of challenges and change. That is a better understanding of the many ways in which community can be created, and how a sense of home and belonging can be achieved in what may seem the most ordinary of settings.

It’s learning for our times.

And there is another community that has grown as a result of my personal quest.

Hidden Hamilton, the blog and the books, would not exist without people who have willingly shared their stories, as well as those who have connected me with them.

And so the stories have become a dialogue, a conversation, layer upon layer, to reveal the social fabric of our suburb, Hamilton. 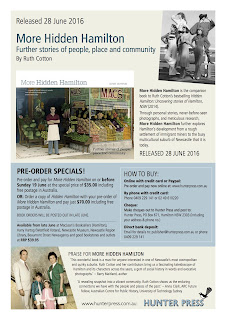