My first impression was of some kind of a discovery garden - but it is a public primary school. Buildings are plain and functional and there is plenty of paving, but what catches my eye are the creative touches everywhere. A huge funky chair balances high above the entrance gate in Samdon Street, and colourful hand painted signposts are immediately helpful to the visitor. 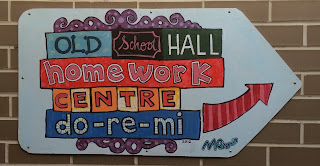 Many of the bright signs around the school were created by a student, Memphis

When David Jack took up the post of Principal of Hamilton Public School in 2006, he decided something had to be done about the state of the grounds. After consultation with parents, staff and students a six year school improvement plan was developed.

‘I wanted people to feel that this is a positive and creative place, the moment they enter the school,’ he says.

Hamilton Public School is blessed with large surrounds and David immediately saw their potential. His philosophy is that a school is living history – not just because of its past development, but because everything that has happened, or been made, or built in a school is someone’s contribution.

David believes that naming and honouring these things help students understand that history is being created every day – including today – and we are all part of it.

In the lead up to the Hamilton Public School’s 150th Anniversary in 2009, a history walk was created, beginning at the Samdon Street entrance. One by one, on either side of the path, nestled among the plants, fourteen simple plaques reveal milestones in the life of the school. They begin in 1858, with the opening of the Pit Town School. 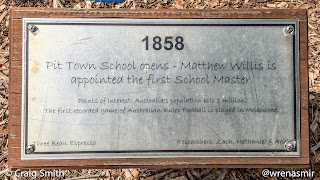 (Click on each image to enlarge and read the text)

A small group of students who were finding school challenging were enlisted to do the research. Their names are on the plaques too - Zach, Nathaniel, Ariel.

Each school milestone has been set against a point of interest within Australia’s larger story. Included are events such as the re-naming of ‘Ayres Rock’ in 1873 after the South Australian Premier Henry Ayres, when it had been known as Uluru for thousands of years - 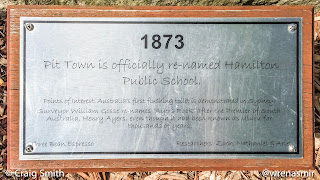 the first military aircraft to be flown in Australia – 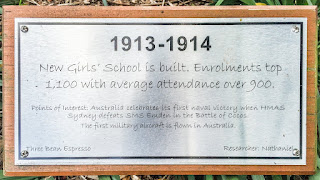 the building of wartime trenches in Gregson Park - 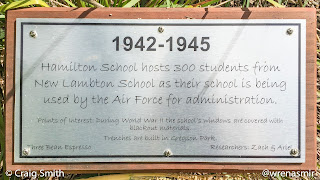 and the Newcastle Knights' first Premiership win in 1997. 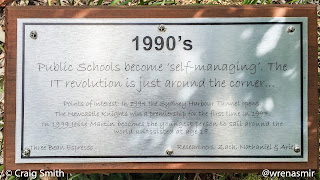 Noted too are the founding of the airline that would become Qantas, Don Bradman’s first test century, the Newcastle earthquake, the election of Anna Bligh as Queensland’s first elected female Premier – and many more fascinating events linked to school milestones.

Elsewhere in the school, the experiences of past students have been honoured, as seen on this plaque by Gladys Reardon-Estell. She was a student from 1927-1932. 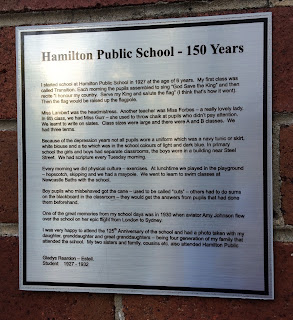 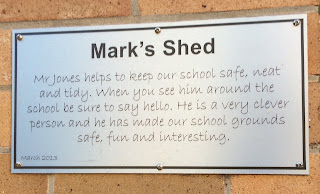 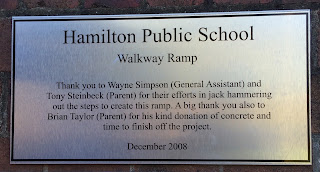 and the school cleaners. 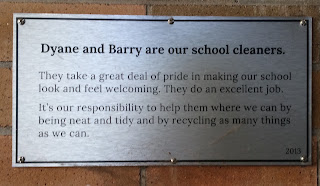 Programs no longer offered like ‘Parents as Teachers’, and ‘Community Languages’ are remembered. During the 1970s and 1980s, Hamilton’s multicultural heritage was reflected by the attendance of students from 26 different nationalities.

Evidence of recycling can be found throughout the school. David Jack seems as if he is just as comfortable behind a desk as hooking a trailer onto his car and heading out to collect some fence palings destined for the tip - if he doesn’t get to them first.

‘We had a saying,’ he tells me, ‘do we have something here that we can use, before we go to Bunnings?’


The students helped, often sourcing materials for the school, like these rocks in the vegetable garden. 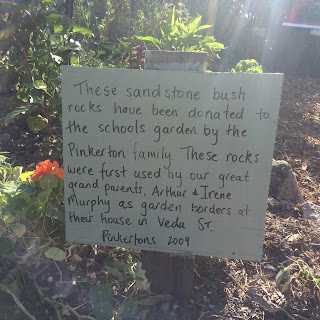 Heritage can take many forms. Buildings are important; so too are the ways in which we claim our cultural identity.

As so many students, their families and staff have been involved in co-creating their school, David told me, very little vandalism has occurred. Co-creators have become co-owners.

The legacy David Jack has left Hamilton Public School is in plain sight, all around.

It’s there in the way he has encouraged the recording of the school’s living history.

It’s there in the way he has led by example - inspiring, engaging, and valuing everyone who is part of the school community.

That legacy is now part of the cultural heritage of Hamilton Public School. 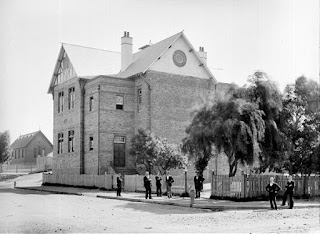 My thanks to David Jack for opening the door for me to the history of Hamilton Public School, and to Rev. Andrew Dodd for the introduction. Thank you also to Craig Smith (@wrenasmir) for photographing the history walk plaques at the entrance.