Pressing his nose against the glass as I hold him up to our high front window, my three year old grandson stares transfixed at the floodlit church tower. Springing from the darkness, it’s so close we can almost touch it, this cake decorator’s fantasy of lacy outlines, turrets and slim arches. 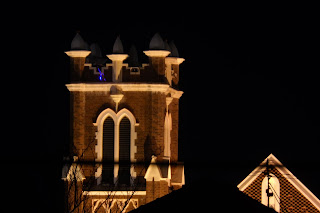 It took just three months to build this new Wesleyan Church in 1928, for a Methodist congregation bursting at the seams. A newspaper report at the time described the new building as the “cathedral of NSW Methodism and the largest Methodist church north of Sydney, seating about 600 people”. [1] It quickly became a familiar landmark for the people of Hamilton. How did this come about? 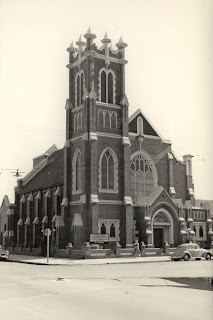 The first Wesleyan Chapel to be built in Newcastle was in Newcomen Street, in front of a cordial factory. The AA Company provided transport on its horse drawn coal trains for its employees and their families from the outlying mining settlements to travel to the various churches each Sunday. Imagine the clanking, the coal dust (despite the canvas covers)  and the innumerable stops! 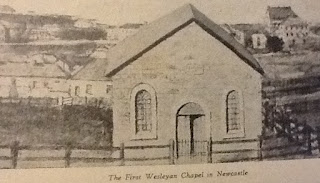 There were three times as many Methodists in the Newcastle coalmining communities compared to NSW generally, and the locality of Borehole, Pit Town and Happy Flat was no exception. [2]


Gradually tiring of the long Sunday rides, other options began to be explored by the Methodists here. As early as 1858, services were held in the slab-and-bark private home of a Mrs Clarke, and later in the Borehole School building established by the National School Board on Cameron's Hill. Then, thoughts turned to the possibility of building their own church.

Even in 1869, the south west corner of Tudor and Beaumont Street would have been a convenient location, in the heart of the three bustling mining settlements that trickled from Cameron’s Hill to the flat past Beaumont Street.

You’ll recognise the corner now as the home of the Greater Building Society. A heritage bank building nestles against the protective curve of a six storey building. 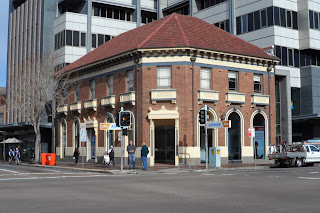 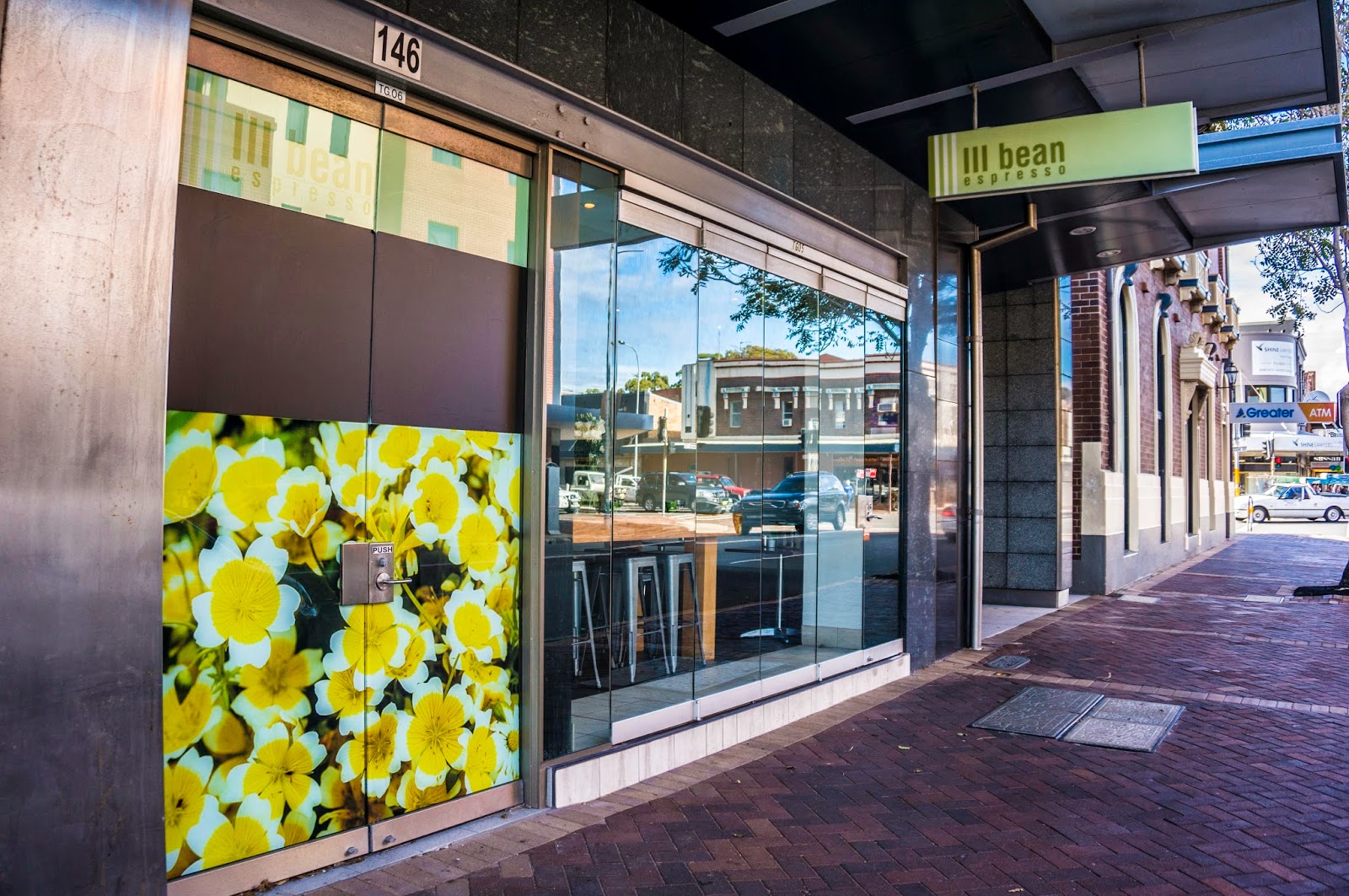 On this corner, a simple, austere Wesleyan Chapel was the first Methodist church building in Hamilton, built in 1869. 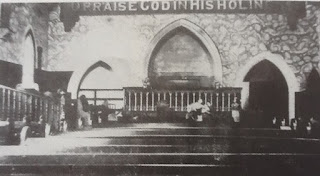 Accommodating 70 people, it can be seen here with the Sunday School hall, built some years later in 1902. 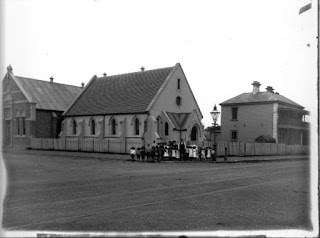 
Colliery managers were the “go-to” figures to officiate at special functions in those days. The foundation stone for this early Church was laid by Mr J B Winship, AA Company colliery manager, on 23 August 1869.


Over 130 years later, during redevelopment of the site by the Greater Building Society’s head office in 2001, footings of the western wall of the church were discovered. Because of their archaeological significance, these creamy sandstone blocks have been preserved where they were found, and the building has been cleverly re-designed around them. They can be viewed through glass tiles in the foyer of the Greater. 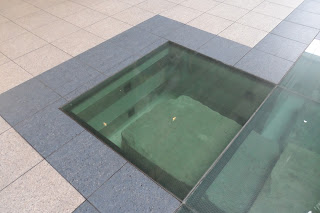 One of the footings of the western wall of the original Wesleyan Church,
foyer of The Greater, Hamilton


Methodism was strong in northern England, the home of many immigrants to our coal mining communities. The movement was a reaction to what was seen as the apathy of an Anglicanism that had lost both its heart and its spirit. Evangelistic preaching (often in the open air), enthusiastic hymn singing, and passionate advocacy of the radical notion that the working classes were equal to the upper classes characterised the Methodist movement.


That advocacy of inclusiveness and social justice continues, reflected in the philosophy and work of the present day Wesley-on-Beaumont.

The 1880s congregation was growing, and the small rectangular chapel was remodelled and extended by architect James Cropley. In 1888 a fine parsonage was built for the Minister and his family, on the corner of Tudor and William Streets. 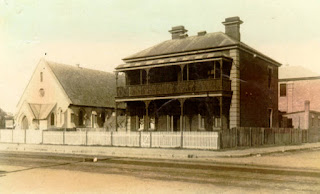 
In 1901, the foundation stone for a large Sunday School Hall was laid by Mr William Winn. Church bazaars – no doubt the initiative of the women - had been the main source of the £520 needed to buy the land.

Mrs Mavis Ebbott, a local Hamilton and church  historian, explained to me that while this was called a Sunday School Hall, it was originally established as a venue for adult Bible classes. These were especially important before the appointment of a Minister, as leadership in worship had to come from lay men in the church.

Five years later, the church could not hold everyone wanting to attend services, so in 1906, evening services were transferred to the Sunday School Hall. Over 300 people could be seated there, seen at the left of the Church below. 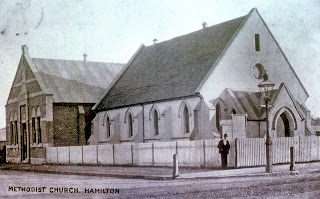 
From the time of brothers John and Charles Wesley, co-founders of the Methodist Movement, the religious instruction of children was especially important. The Hamilton Methodists took up this challenge.

In 1909 a two story building with a suite of classrooms was erected at the back of the Sunday School Hall. This was named Kindergarten Hall. By 1917, Sunday School enrolments were burgeoning. 407 children were enrolled in Sunday School. A third building - Social Hall – was built in 1922 for education, recreation and use as a gymnasium.


In their account of the history of Hamilton Wesley Uniting Church, Don and Mavis Ebbott wrote:

“For many years these halls were filled every Sunday afternoon. All the different organisations of the church used them for meetings and functions. Every former pupil of the old Sunday School would recall the curtain of the stage with the camels walking up the dusty road to Jerusalem”. [3]


Still, the extra Halls were not enough. We learn that in the early 1920s the church building was “taxed to its utmost capacity”. [4] 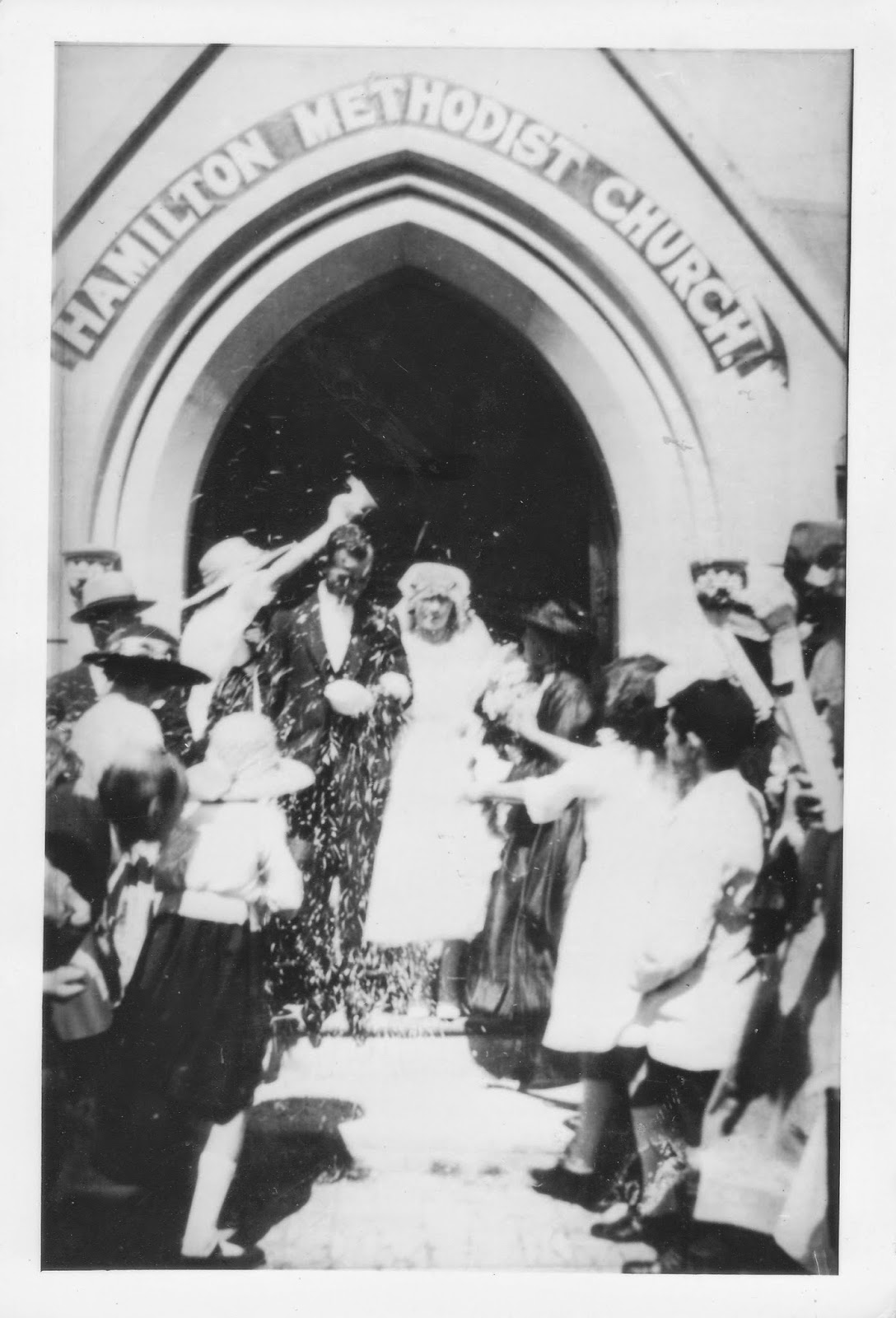 Many weddings were held in the popular church
Thomas and Gwendoline Griffiths married at the Methodist Church, Hamilton
on 17 September, 1921
Photograph from the personal collection of Alison Edwards

Pressure was mounting for more ambitious development, to meet Church needs. Hamilton was in the midst of a building boom, and its population in 1928 was almost 19,000.

The original Methodist Church and the Parsonage were sold to Australia’s first bank, the rapidly expanding Bank of NSW, on 1 August, 1928 for £3,250. The church had stood for almost 60 years, and was demolished by the Bank.

The sale was to finance a new church building close by, on the corner of Denison and Beaumont Streets.

Built for £13,400 pounds, it was dedicated on 24 November 1928.  The choir stalls alone were built for 70 - exactly the number the first church could hold, in total. Upwards of 600 people could gather in this new "cathedral of NSW Methodism"  -  the one my grandson marvels at from our high windows. 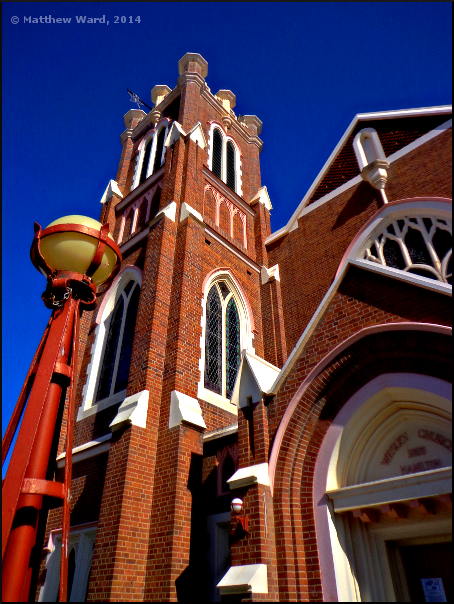 
The story does not end here.


In 1958, the Ebbotts wrote, the halls were refurbished and early pioneers were honoured by naming the halls: the big hall – The Cowan Assembly Hall, the Social Hall – The Harry Jones Memorial Hall, and the Kindergarten Hall – the Josiah Nicholas Kindergarten Hall.

Two of these Halls would not survive the next few years. Cowan and Nicholas Halls, together with a parcel of land that had been the lawn between the old church and the parsonage, were sold. Now, the Greater buildings encompass where they stood.

The sales helped finance yet another building, Fellowship House, which opened in 1962. Purpose built next to the new church, Fellowship House boasted a sanded and polished floor for dancing, and a stage. Mrs Shelia Gow, a descendant of the McIntyre flour milling family, wrote to me that in the late 1940s and 1950s, young people from the Scots Kirk and the Church of England in Hamilton enjoyed combined dances – the Methodists weren’t allowed to dance. By the sixties, however, Methodism had come of age! 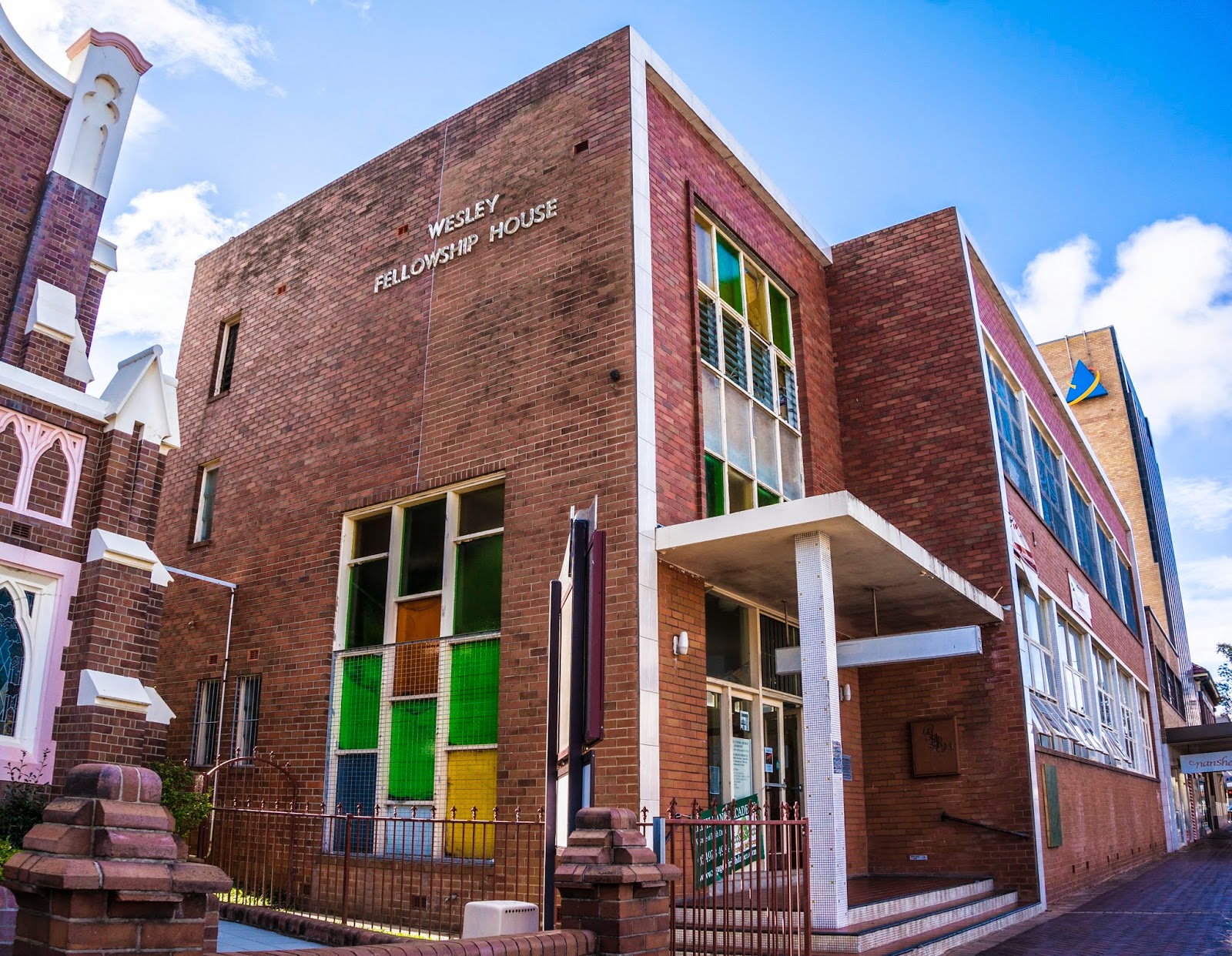 One of the Halls remained, the Social Hall, facing west on William Street. It had become a senior citizens centre but eventually, it too was sold to become a warehouse. 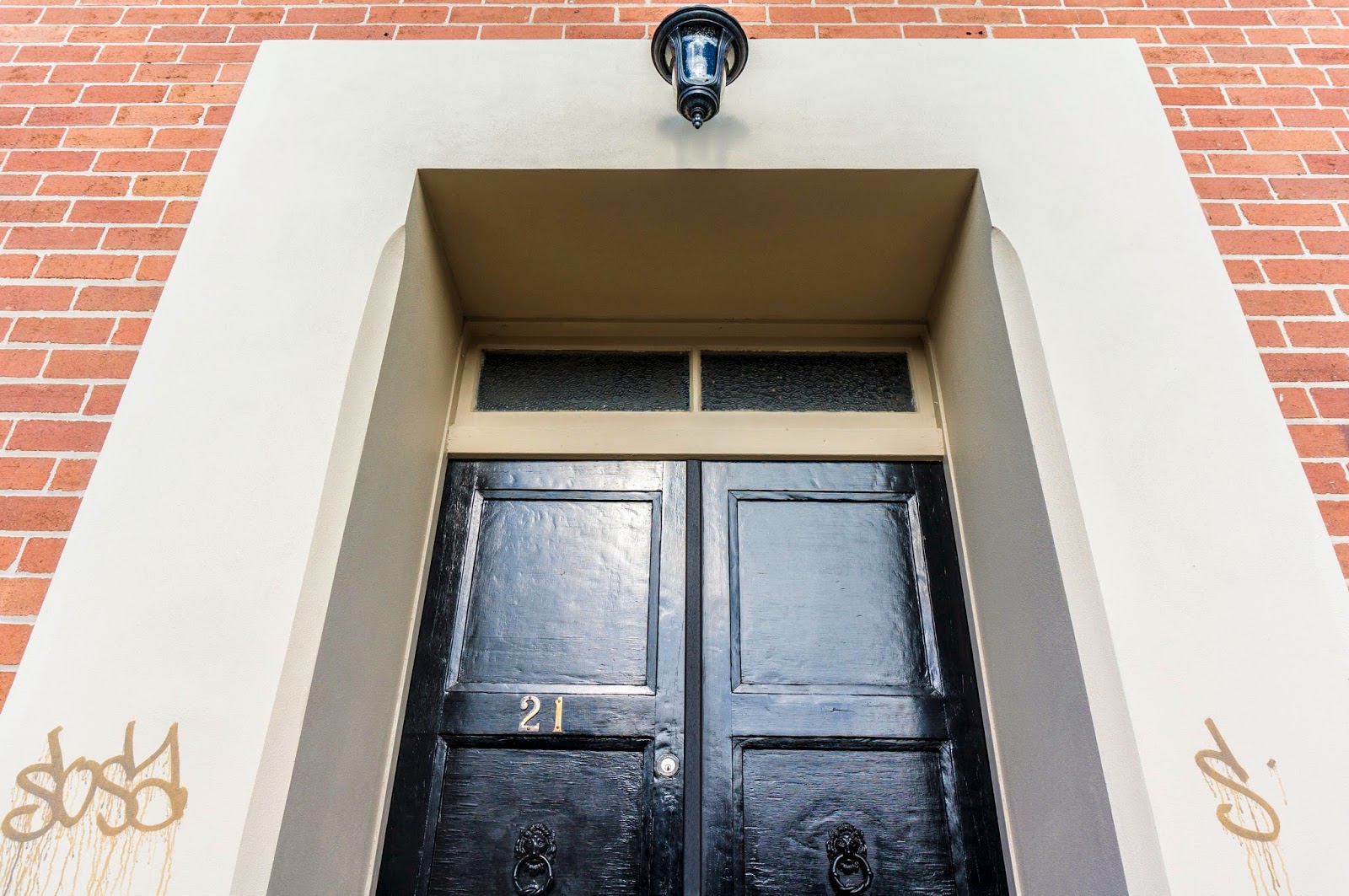 Wesley-on-Beaumont continues to find new and diverse ways to serve the Hamilton community. Promoting fairness and equality are still foremost on this Church's agenda.

I wonder what its founders would think of the colourful Fair Trade products displayed in its vestibule, and the coffee shop I found occupying part of its nave? Somehow I think that the army of women who baked and sewed for the countless bazaars to raise funds for a succession of new buildings would feel perfectly at home in Bill’s Place. It’s a volunteer run coffee shop with a play space for toddlers, affordable coffee and delicious home made cakes, and one of the most unusual kitchen windows you are ever likely to see! 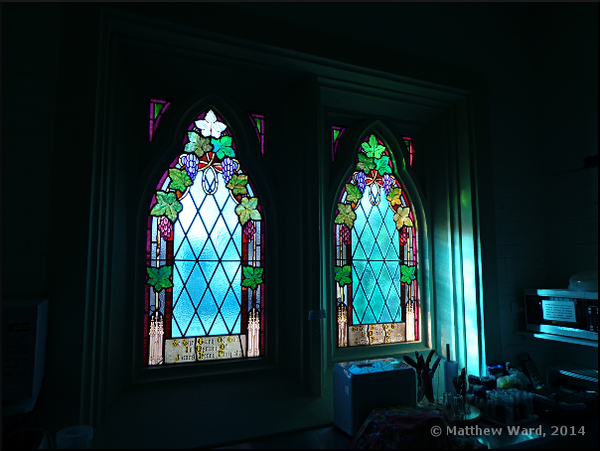 Related post
'Blow it up over my dead body!'
http://hiddenhamilton.blogspot.com.au/2013/06/blow-it-up-over-my-dead-body.html 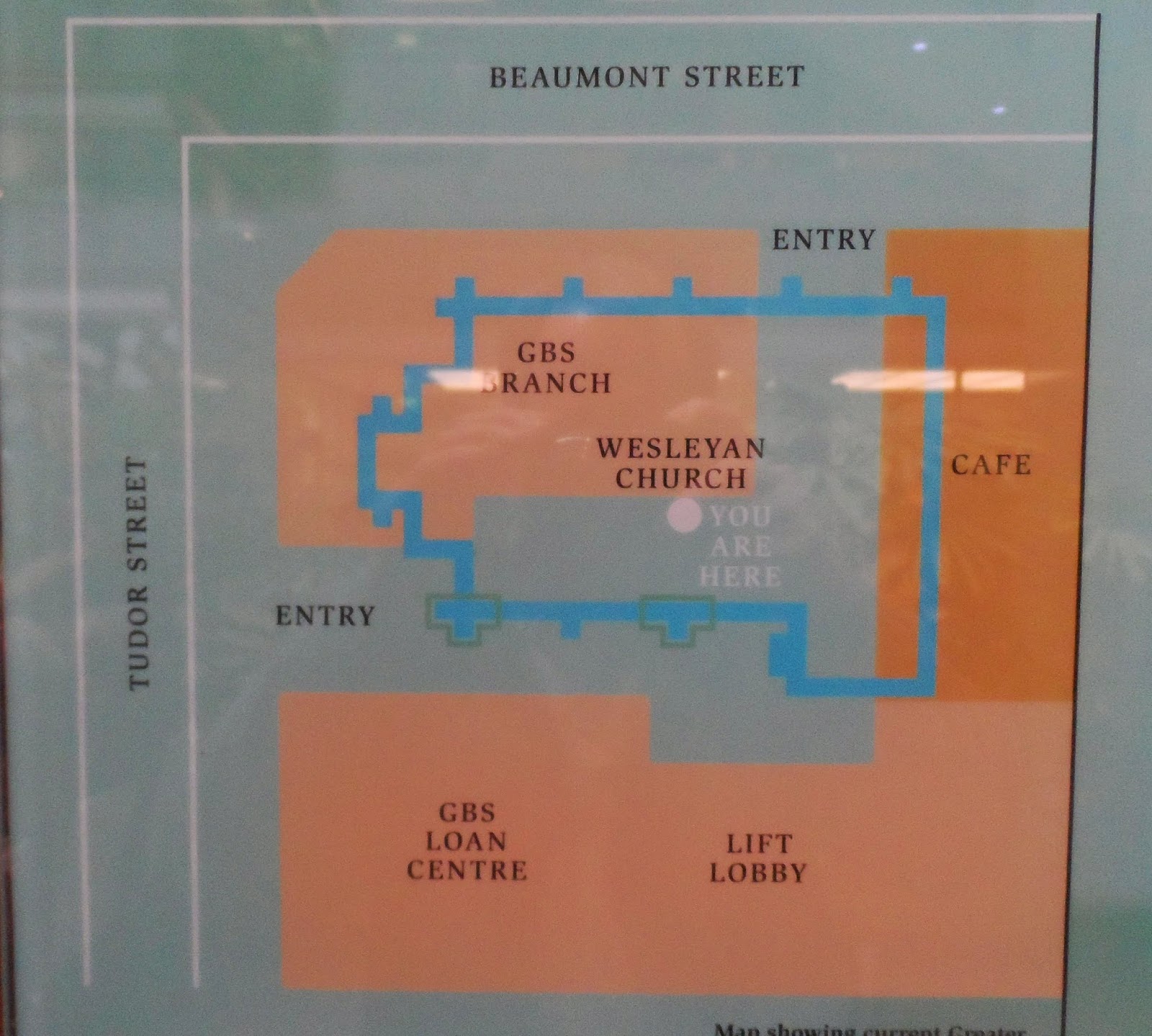 
[1] Hamilton Wesley Methodist Church: 100 Years of Christian Witness. Centenary Souvenir 1858 – 1958 (Copy held in Church Office, Wesley-on-Beaumont)
[2]  In her 1979 PhD thesis The Newcastle Coalmining District of NSW, 1860 – 1900, Ellen McEwen’s analysis of 1891 census shows that Methodists were 31.1% of the population of the Newcastle coalmining district, compared with 10.1 % in NSW. A copy of this excellent social history is held in the Local Studies section of the Newcastle Region Library.
[3] Ebbott, Don and Mavis: Hamilton Wesley – a continuing story.... Hamilton Wesley Uniting Church 1858 – 1988. Copy held in Church Office, Wesley-on-Beaumont.
[4] Murray, Peter: From Borehole to Hamilton Jubilee 1848 – 1921. Self published (2006).
Posted by Ruth Cotton at 03:00 No comments: