Every weekend, from the age of two in 1938 until he was about 24, Brian Archer stayed at his grandmother’s two storey weatherboard house in Fern Street, Islington.

Not far from the house was the railway line.

Every time a train passed through, the building shook from the vibrations.

Brian’s grandmother was Mary Ann (Polly) Smith (1882-1962) – the first born surviving daughter of  Harry and Katherine Nesbitt. Harry Nesbitt was one of Hamilton’s earliest stationmasters (from 1909-1916). His daughter Polly was an accomplished artist, whose paintings decorated the house. She also played the organ. 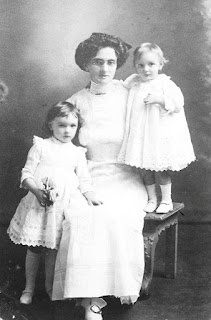 Brian would catch the Waratah tram from a stop near his home in Georgetown, hop off at the corner of Tudor and Beaumont Streets in Hamilton, and walk down Beaumont Street through the railway gates to his grandmother’s place. Occasionally, he’d catch a bus instead. When he was older, he rode his bike. 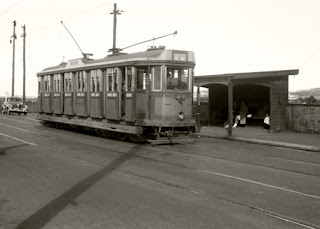 Some members of Polly’s family worked on the railway, following in the footsteps of stationmaster grandfather Harry Nesbitt. If anyone had to do shift work, the ‘call boy’ would come by on his bicycle at any hour of the night, or early morning, with the new roster. Running down to the side door, he would sing out at the top of his voice, ‘CALL BOY!’

As long as she had a fuel stove, Polly always had the kettle on the boil in case there were visitors. She collected branches for the stove from the vacant land beside Hamilton Station, sometimes walking further afield to Islington Park.

Two of Polly’s sisters were regular visitors – every Saturday morning. Maggie Zoppi and Kitty Barker would arrive bearing tea cakes and other delicacies from the local shop to be enjoyed by everyone.

The copper on the back verandah was also wood fired. Having a hot bath involved advance planning - lighting a fire under a large copper and bucketing a rationed amount of hot water into the bath, which was in a separate room at the back of the house. Most houses then had a rain water tank.

With the coming of gas, the fuel stove was no longer needed but remained in place in the Fern Street house.

‘We had to feed the gas meter under the stairs with coins to keep the gas stove going,’ says Brian. ‘The gas man would come and read the meter, count the coins in the box and calculate how much the gas used was worth. He would give a refund if the cost of the gas used was less than the money in the box.’

Coal was a different story.

It was delivered to homes from Hunt’s coal yard, at 88 Beaumont Street – later to become Deitz Hardware.  A side verandah of the Fern Street house had a coal room attached. Brian helped carry coal in a bucket from the coal room to the fireplace in the dining/lounge room.

Home deliveries were part of life, when fewer households had their own transport. Daily essentials were fresh bread from a local baker, and milk in the early hours of the morning. Both were delivered by horse and cart.

‘The milkman would run down the side in his sandshoes and grab the billy can which had been left on the steps; it would rattle as he grabbed it and took it back to his cart to fill it up. He then ran back again to place it back on the steps. Of course there had to be money left with the billy,’ Brian says. ‘And the postman called twice a day, on his pushbike.’

The Ice Man would call every two or three days to put a new block of ice in the top of the ice chest, when refrigerators were not even thought of. The Prop Man would visit from time to time in case a replacement prop was needed for the wire clothes line strung across the back yard.

The Sunday papers were delivered by a boy with a billy cart, as was the evening paper, The Newcastle Sun. But the weekday morning paper, the Newcastle Morning Herald, was an early morning chore for the kids, who were sent to the newsagent even on freezing winter mornings.

Under cover of morning darkness, the sanitation worker (or ‘dunny man’) trundled his cart along the back lanes, changing the pans in the outside lavatories.

‘All of this would have been part of the heritage of similar homes in Hamilton and Islington,’ observes Brian.

Staying with his grandmother in such a convenient location meant special privileges for the young Brian, whose relationship with his grandmother was a very special one. He had a choice of the movie matinee at the Regent Theatre, Islington or the Roxy Theatre in Hamilton – both within easy walking distance of the Fern Street house. 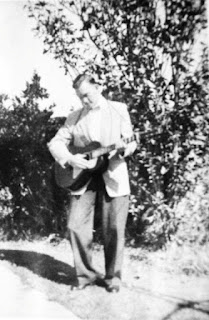 Brian Archer with his guitar, c1950s
Photograph from the collection of Brian Archer
Brian trained as a Radio, TV and Electronics technician at nearby
Tighes Hill Technical College

The Fern Street house is no more, replaced by a large commercial building. Trams, and coal fires in our lounge rooms are things of the past. We don’t have to forage in search of wood for our wood stoves or coppers - we just turn on the hot water tap. How we wish there were more home deliveries! Yet this glimpse into family life close to Beaumont Street and the rail line, before cars became ubiquitous, is a reminder that while everyday domestic life was tougher, it was also simpler.

Thank you to Brian Archer for sharing photographs and information for this story.