Sandra Hargreaves is a Novocastrian who lives and works in London. She is the granddaughter of Charlie Reilly Deitz, who began working in the hardware store at 88 Beaumont Street, Hamilton [1] after World War 1. Reilly (as he was known) purchased the business in 1932 and after World War II, his son Charles Douglas Reilly (Doug, Sandra’s father) joined him. The Deitz family business was a Hamilton fixture for 42 years, from 1932 until 1974. Although the shop was always part of Sandra’s life growing up, her vocation has taken her far from hardware. Sandra specialises in the diagnosis of dyslexia, supporting dyslexic adults both in education and the workplace. 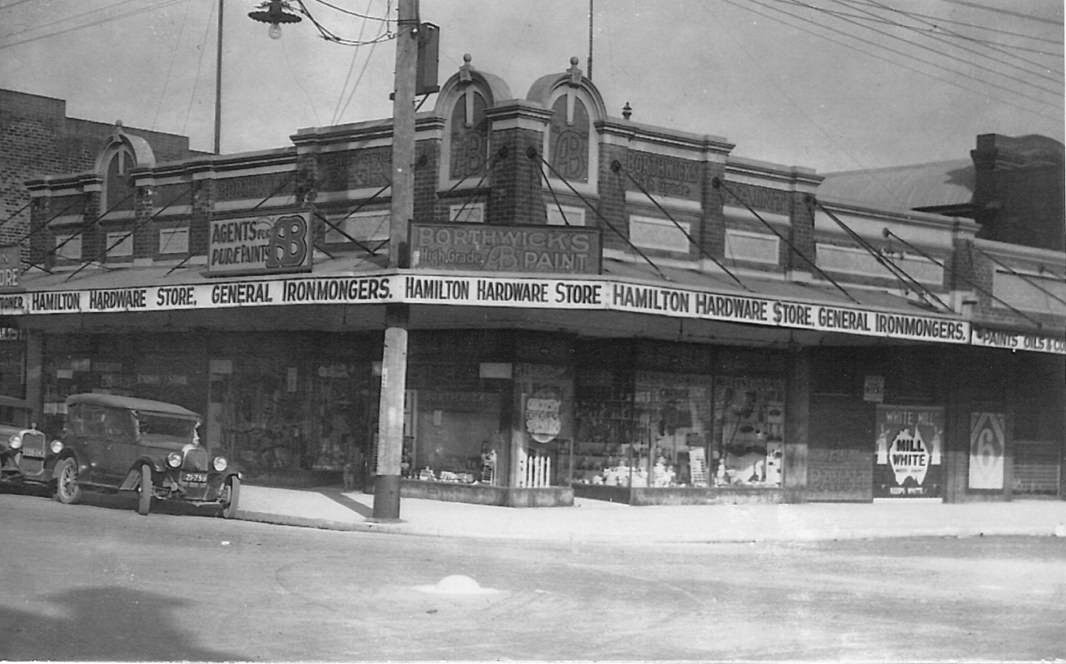 
Photograph from the collection of the Deitz family

My grandfather, Reilly Deitz, had worked in hardware in the Hunter Valley from about the age of fourteen to help support his family after his father died. He had been accepted into Fort Street High, but could not go due to family circumstances. Instead, he delivered hardware from a Maitland store, pedalling his pushbike around the Hunter Valley. Then, after World War I and fighting in the third battle of the Somme, Reilly went into the hardware store at 88 Beaumont Street to help an ill war comrade, Frank Newey. Gradually my grandfather paid off the shop, enabling Frank, and later his widow, to have an income.

My grandfather was a very generous man and we found out after he died that he had helped many families in Hamilton during the Great Depression. He also bought houses for family members, including his mother, in his home town of Kurri Kurri.

Reilly Deitz was well known in Hamilton, as a member and grand master of the Masonic Lodge and also a member of Hamilton Bowling Club. He died at the age of 65 of a cerebral haemorrhage. There were so many mourners at Hamilton Wesley Church that they spilled out onto the pavement and street. A police escort accompanied the funeral procession down Beaumont Street and past the hardware store to Maitland Road, before proceeding to the Crematorium.

My father, Doug Deitz, joined my grandfather in the shop after returning from overseas service in the AIF in World War II. Da (as we called my grandfather) told him he had been waiting for him to come back so they could share the load. I remember my grandfather working part-time in the shop, doing the accounts, until a short time before his death in June, 1960.

The shop was always part of my life and I can remember being lifted onto the counter by my father or grandfather if ever I went in with my mother. When I was eight I attended RAYS, a Girls Fellowship at Hamilton Wesley Church after school, one day a week. After the meeting, I would walk down Beaumont Street by myself, meeting up with my father as he closed the shop and continuing home together. I remember an incident which really shocked me as I passed the Northern Star Hotel alone, late one afternoon. Two women were fighting outside the hotel, pulling each others’ hair and scratching each others’ faces. I saw beads scattered on the pavement where a necklace had been broken. I had never seen anything like this in my life and it had a deep impact on me.

I started doing small jobs in the shop in my last years at primary school, filling bottles with methylated spirits, turpentine and linseed oil for pocket money. Later I worked in the shop occasionally before Christmas and at busy times, but it was hard work for a young woman. At that time nails and screws were weighed on the scales and wrapped in newspaper, before being put into brown paper bags. I complained about what the nails and screws did to my hands. After completing my Leaving Certificate and while attending the University of Newcastle I worked first at Wynns, and then the Cooperative Store during my holidays.

I felt something of a traitor to the family business, but hardware wasn't my milieu. I was lucky enough to read the poetry which my father would have loved to have studied, while doing my Bachelor of Arts degree.

My most embarrassing incident in the shop occurred one day when I was helping out because a staff member was sick. I was at university and my boyfriend came in with a friend and asked for a can of 'Black and White' paint. I thought it was a brand so went to ask Dad. Everyone in the shop roared with laughter! I wasn't suited to the hardware business. I am often reminded of this incident, by my husband Alan, who was the offending boyfriend!

My father Doug Deitz was also well known in Hamilton and was active in Hamilton Rotary for as long as I can remember. He became president in 1957. Dad, like his father, was always willing to help people and I remember him going in to open the shop on Sundays to provide something for a tradesman, even though it was his only day off. He also worked long hours after closing at night and on weekends. 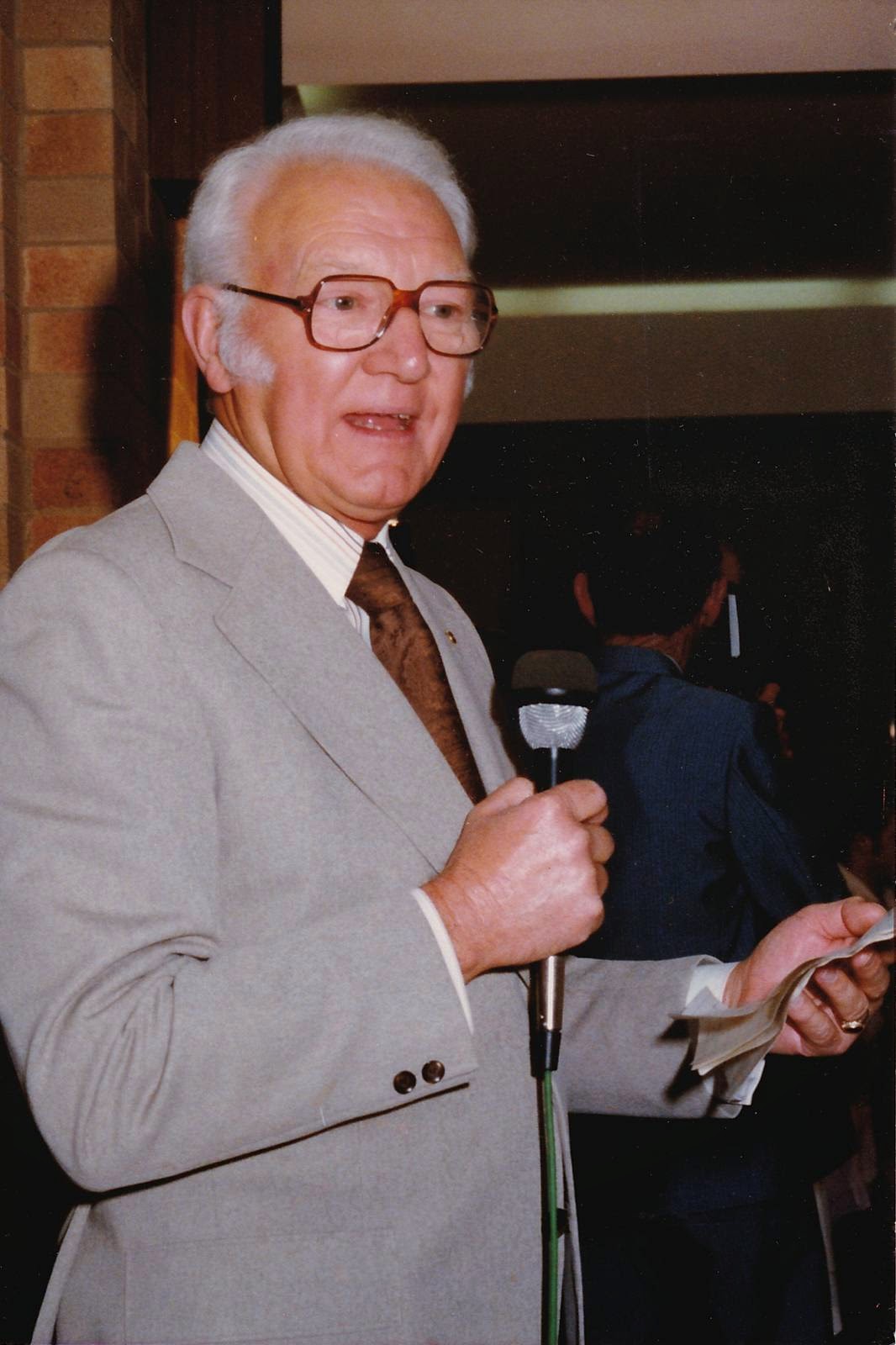 Doug Deitz c.1970s
Photograph from the collection of the Deitz family

My father was an unlikely recruit into the world of hardware. His passions were music and poetry; nevertheless he was the proprietor from 1954 to 1974, including 14 years after Reilly’s death.

My father’s great love was music and he sang as much as his work in the shop allowed him. He had inherited this gift from his mother's family, the Pryors, and indeed his mother's brother, Jo Pryor, was known in the Hunter Valley as ‘the singing policeman’. There was nothing Dad loved more than singing, with his family and friends. My father and his closest friend, bank manager Geoff Collins, loved singing on Saturday nights accompanied by a former neighbour Melva Burns. 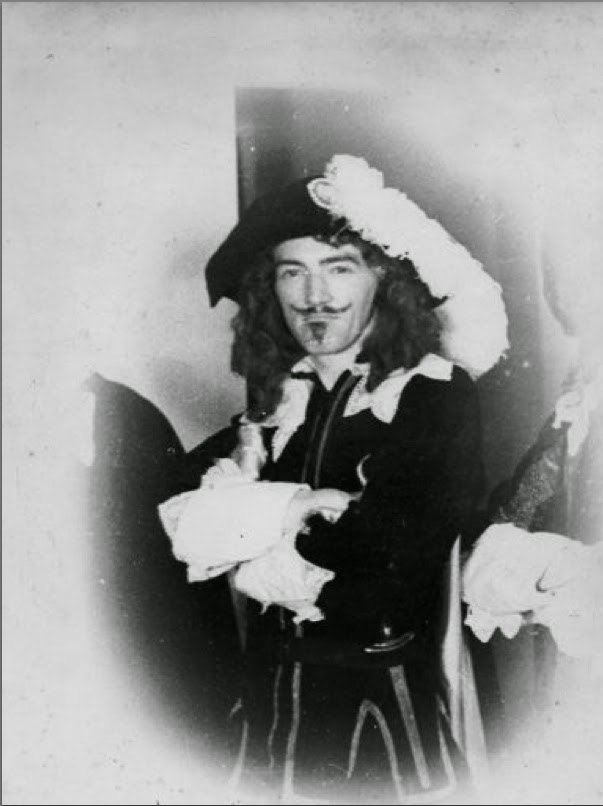 ‘My operatic father’ – a youthful Doug Deitz, undated
Conspirator in Verdi’s opera 'The Masked Ball'
Photograph from the collection of the Deitz family


The hardware store entered a new phase when Dad became a founding member of Mitre-10. This enabled the participating hardware stores much greater buying power at  a time when competition was increasing and affecting sales. Dad received an award from the group for his work, and was very proud of what had been achieved. 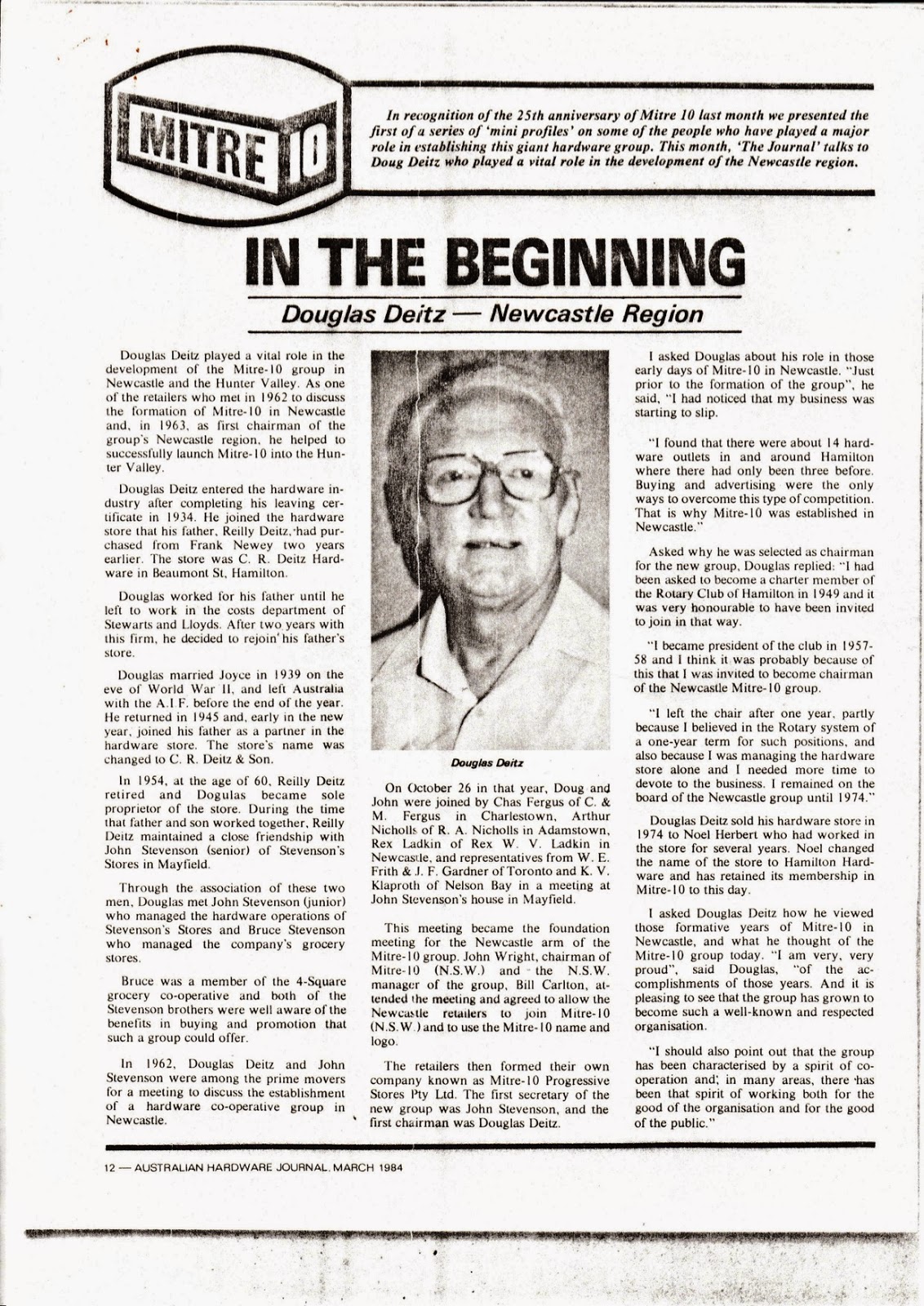 Mitre-10 In the Beginning: Interview with Douglas Deitz, Newcastle Region
Australian Hardware Journal, March 1984
Clipping from the collection of the Deitz family


Finally, in 1974, the time came when Dad needed to retire. Both daughters had trained as teachers and there was no family member to help him as he had helped his father. The business was bought by long-term employee Noel Herbert, who changed its name to Hamilton Hardware. Noel greatly modernised the shop, introducing self service and check outs. Pre-packaged items had become the way forward. The days of weighing nails were past!

I have another connection with Beaumont Street. My maternal grandparents Stan and Levina Brownsmith ran a Cafe Milk Bar at 12 Beaumont Street from 1935 to 1939, just as Australia was coming out of the Great Depression. The whole family worked in this business and lived in the adjoining residence. With its proximity to Hamilton Station, the Cafe was a favoured breakfast haunt for the local taxi drivers as well as a supper venue for the patrons of the Regent Picture Theatre on the corner of Maitland Road. I can remember my father reminiscing about courting my mother in the Cafe over milkshakes! They were married at the Hamilton Wesley Church on 2nd September 1939, the day before war was declared. After the marriages of my mother Joyce and her sister Jean, the Café was sold in late 1939. 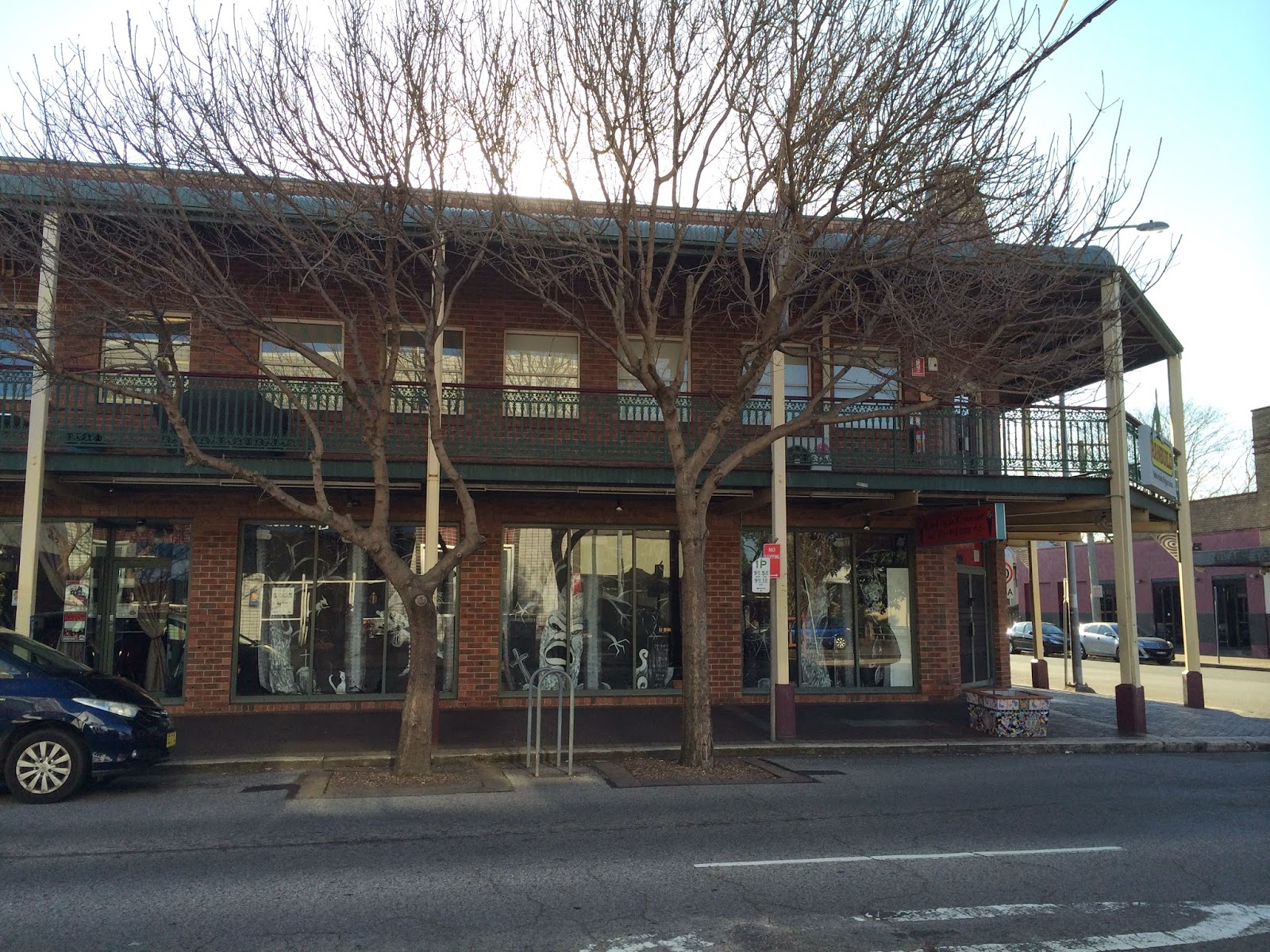 The cafe milk bar in which Doug Deitz courted Joyce Brownsmith, his wife-to-be, has been replaced by this building (2014)

And as the memories keep coming, I think of the last line in The Great Gatsby –
‘So we beat on, boats against the current, borne back ceaselessly into the past.’ [2]


The retail genes seem to have disappeared in the generations that followed. However, Dad's great love of music has been born again in his grandsons. Alexander Hargreaves is an opera singer and director, currently working in Sydney, while Stefan Hargreaves is an academic music master and assistant house master at Tonbridge School in the UK.


It is a blessing of our times that these young men  have been able to follow their passions. 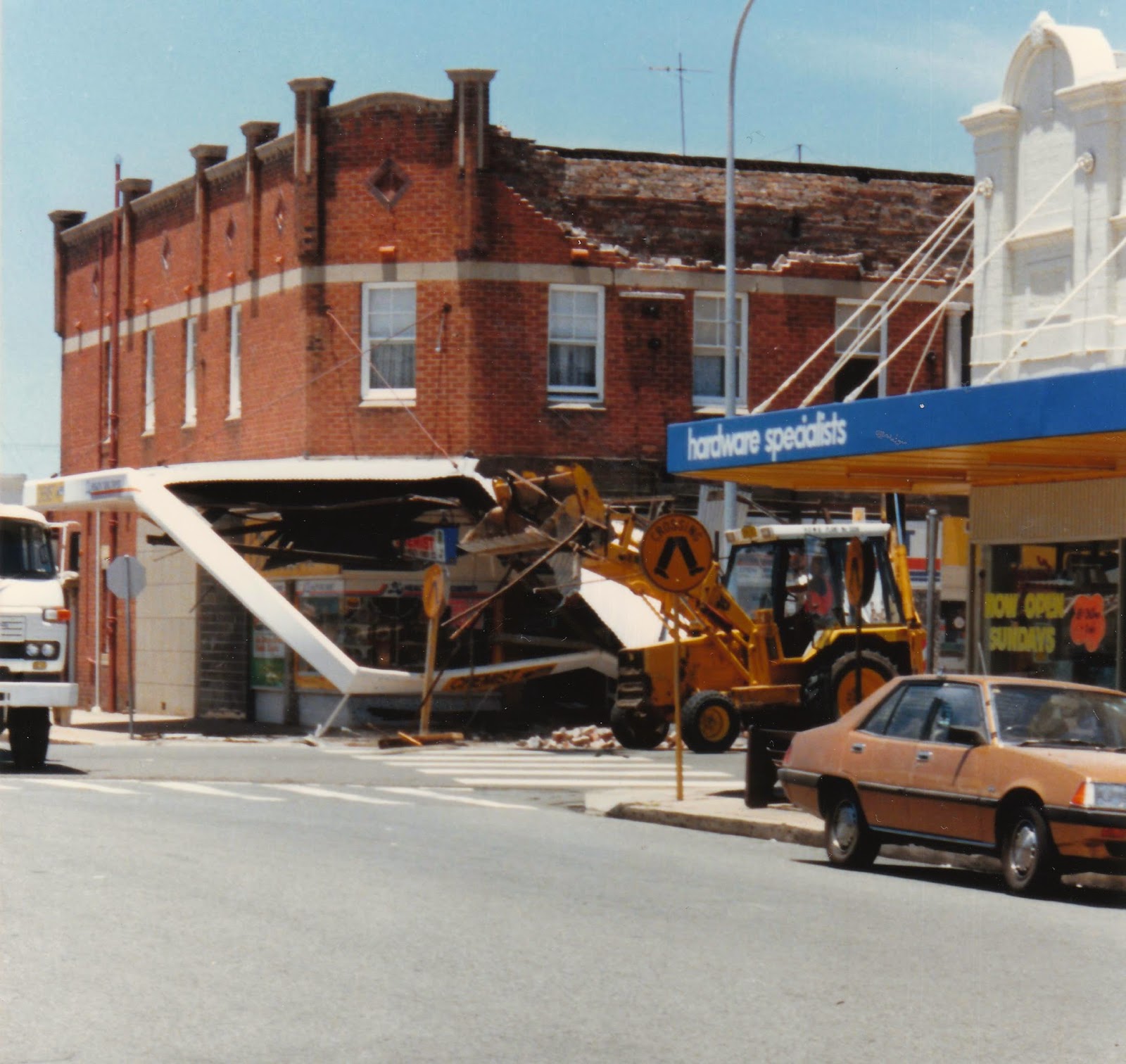 The 1989 earthquake damaged the Mitre-10 hardware store
The Deitz business had been sold in 1974. Doug Deitz died in March 1990,
not long after the earthquake
Photograph by Clarice Eyre, from the collection of Lorraine Castle

Thanks to Sandra Hargreaves for writing this guest post, to the Deitz family for photographs, and to Bob Donaldson, who connected Sandra to Hidden Hamilton.