Why does a blacksmith have a shop?


It was his private retreat, even though the sound of hammer against anvil blasted my five year old eardrums. I loved crouching against the slab timber wall at a safe distance, watching my father lean into the silken shoulder of one of his beloved horses, the animal lifting its front leg as a magical reflex.

There was a relationship between my father and each horse. It seemed as if they had entered into a pact; as if it knew my father would armour it against vulnerability from soft or broken hooves if it stood still.

Not a day passed when my father did not ride a horse, mustering sheep and cattle on our property. He tended the hooves of all his horses, meticulously and personally.

When local historian Mrs Mavis Ebbott showed me this photograph of Frank Hazel’s blacksmith shop at 162 Beaumont Street, Hamilton, I was back in my father’s “blacksmith’s shop” instantly. 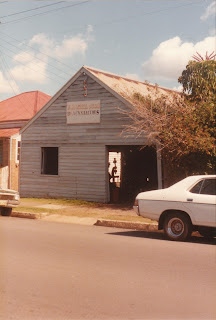 
I saw the horseshoe, a red, live and dangerous thing, grasped in my father’s tongs as he extracted it from the coals of the forge. 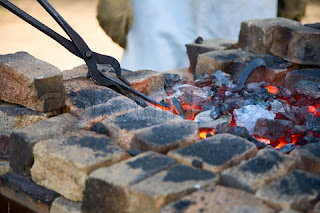 
I saw the glint of the pointy nails waiting in their wooden box, soon to be driven into the wall of the horse’s hoof.


I heard staccato hammering as the hot shoe was beaten into a perfect fit.


I shivered at the sound of the rasp, as my father smoothed the edge of the hoof with methodical strokes.

All around me was the silence.

Immobilised by its weight,  I dare not move and alarm the horse.


John Patterson was the first blacksmith in Beaumont Street, in 1901. It’s just a couple of minute’s walk from where I live, in this post industrial city of Newcastle. Over the years, the “shop” changed hands – James Goddall (1950) and finally, Frank Hazel. 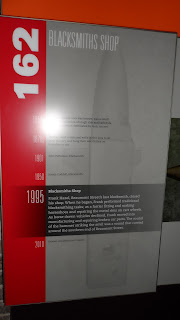 
When Frank Hazel opened his shop, there were more than half a dozen smithies nearby. [2] I imagine that this was “the smithies’ strip”, and that business was brisk – the regular cycle of shoeing horses, and seasonally, repairing metal “tyres” on wooden wheels of carts and other horse drawn vehicles.

Horses and carts were used by “The Store” bakery for bread deliveries to Newcastle homes until 1975. At its peak, “The Store” had 80 horses, stabled at Clyde Street, Hamilton North, on the same site as the ovens where the bread was baked. [1] “The Store” maintained its horse drawn delivery carts long after others had motorised, thus ensuring continuing business for the blacksmiths. 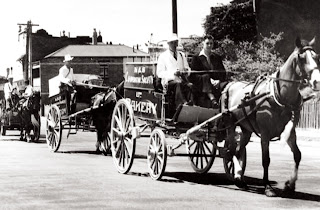 
As times changed, Frank Hazel became more of a city blacksmith. While he still made horseshoes, picks, and ploughs, he also mended babies’ prams, billycarts and tricycles. Gerard Walsh, now retired from the Greater Building Society, remembers "some time in the 1970s", taking Frank a big steel trolley from the office to have its wheels repaired.

In 1983, a young apprentice hairdresser, Ann Hardy, would park her car near the racecourse and walk past the blacksmith’s shop on her way to work at the Kathlyn Beauty Salon. Now a historian and Secretary of the Hunter Regional Committee of the National Trust of Australia, Dr Hardy remembers the unpainted weatherboard building practically on the street, out of place among the houses, yet somehow still looking as if it had been there a very long time. She recalls:

‘As I walked by, I never stopped to talk to the man busy working with his tools. I can remember the noise, the clanging and banging, but I didn’t dare look inside this male domain’.

Frank closed the shop in 1995. A private residence now stands in its place. 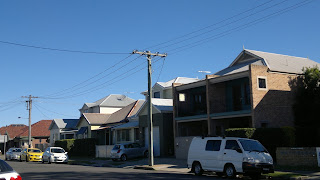 Streetscape with 162 Beaumont Street in the foreground (2013)

So why does a blacksmith have a “shop”?

Blacksmiths tended to be located on the edges of townships or main thoroughfares, quieter spots where horses could be easily left with the farrier. The Beaumont Street smithies were at its southern end, well away from the main shopping centre. Of course blacksmiths needed a “shopfront” for customers, even if it was just an open shed like Frank Hazel’s. My resident “brains trust” suggests that “shop” might be short for “workshop”, a place where manual or mechanical work gets done.

My father had a dedicated shed/shop/workshop for blacksmithing among the usual array of farm buildings – machinery sheds, haysheds, milking shed, woolshed. Then there was “the blacksmith’s shop”, and I could never work out why it was called a “shop”.  Especially since his only customers were his own horses.

Once a meditative sanctuary on a busy farming property, my father’s “shop” now sits empty. Only his tools remain. 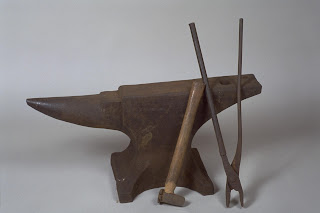