It was a yawning gap in my story about gay Hamilton of the 1970s and 1980s and the wine bar at the corner of Beaumont and Donald Street.

I wrote in that post  about the O’Beirne Grocery, established around 1915 at 34-36  Beaumont Street. Already selling bottled wine, it became a ‘wine saloon’ in 1926. Remodelled in 1970 by new licensee Bernard Sarroff, the ownership of what had been Bernie’s Bar changed again around 1974.

Then - a gap. We next discover the wine bar as the Centurion in the late 1970s, set to became a gay friendly space. Drag queens thrilled the punters with their performances, and wild times were the norm. Over almost a decade, this wine bar drew the crowds, becoming Pete’s Wine Bar, and later Tess’s.

Now I know what happened in the gap. Jackie Ansell contacted me, and shared her experiences as co-owner of what was known as Bernie’s Bar, and her own wild ride during just two years in 1974 -1975. Jackie and her then husband, Keith Thorn, took over the wine bar in partnership with Ken Lease Constructions. 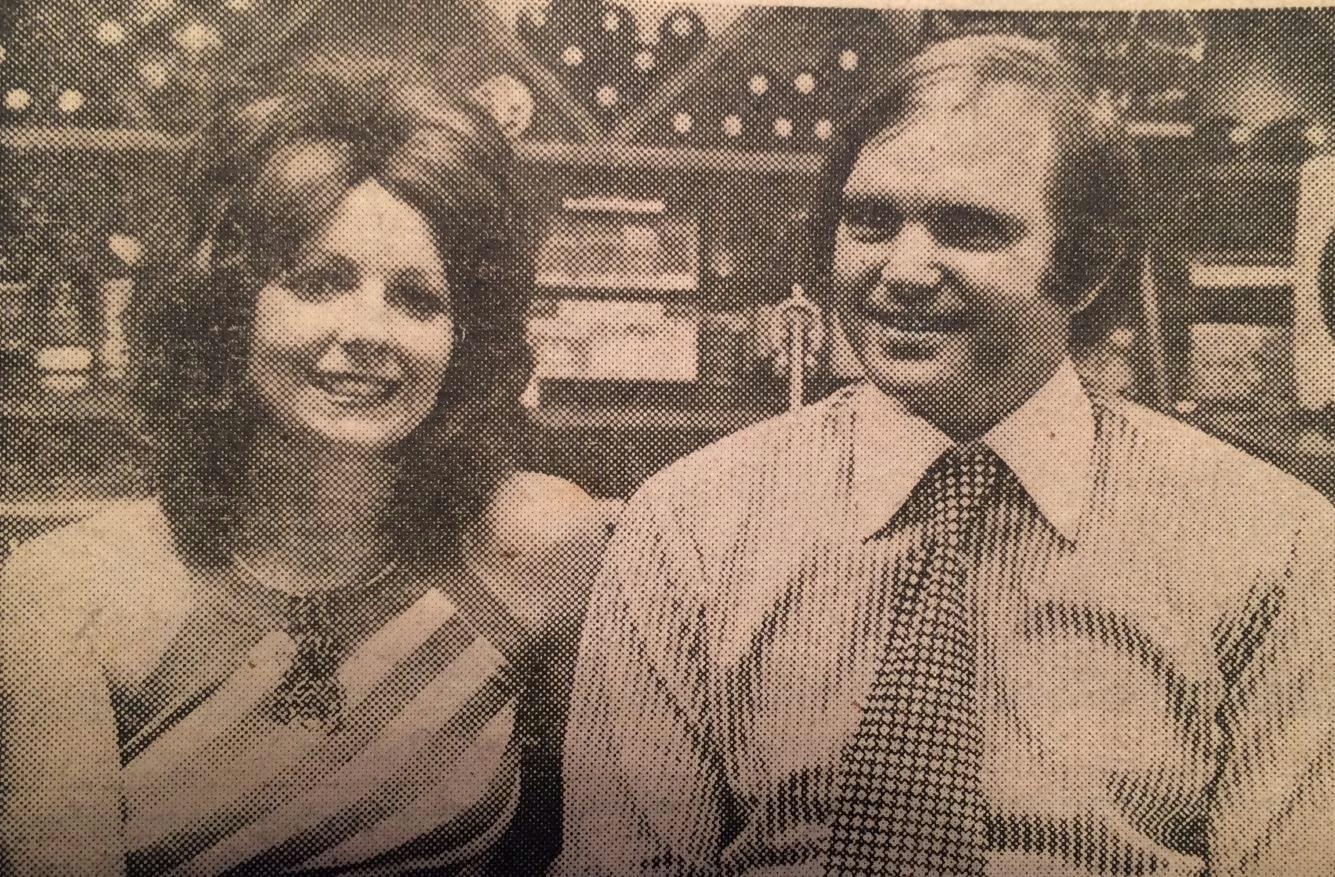 Jackie’s daughter was just 16 months old, but she plunged into transforming the dingy premises. The young family lived above the bar, just as the O’Beirne family had done through the Great Depression and World War II.

The Thorns wanted to retain a mid-Depression style in the redecoration, with old style pin up photographs above the bar. Cream coloured walls were highlighted with green, silver and black stripes; the ceiling and carpet were olive green. Echoing these colours, peacock feathers draped from wall vases, ferns stood in every corner, tables were white pine church pew style, and – there were fashionable bar stools!

‘We even had one of the first microwaves in Newcastle’, remembers Jackie.

A three page feature in The Newcastle Sun (February 14, 1974) carried a glowing story, photos and advertisements from businesses involved in the transformation. [1] The 'new' Bernie’s Bar was promoted as something completely different from local clubs, hotels or restaurants of the day, with wine, food, music and a friendly, casual atmosphere.

‘We strive for a happy mixture of wining, dining and relaxation...cider is always on tap and customers can also enjoy a glass of red or white wine or champagne,’ Keith told the newspaper. 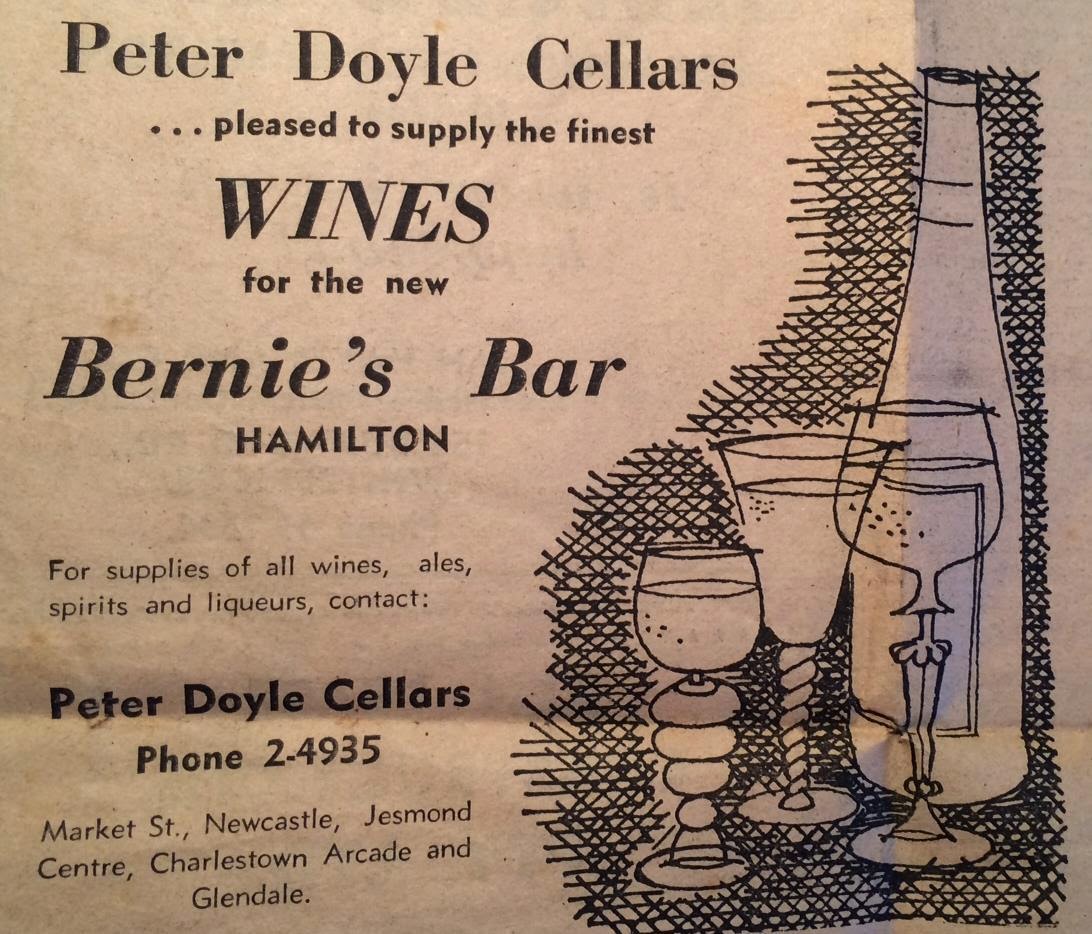 Then there was ‘Bernie’s Bomber,’ a cocktail invented by Jackie.

‘It was a lethal mixture,’ she says. ‘Green Ginger Wine, Bianco and Cottees Lime Cordial. It was so popular that some nights, patrons got through six flagons of it.’ 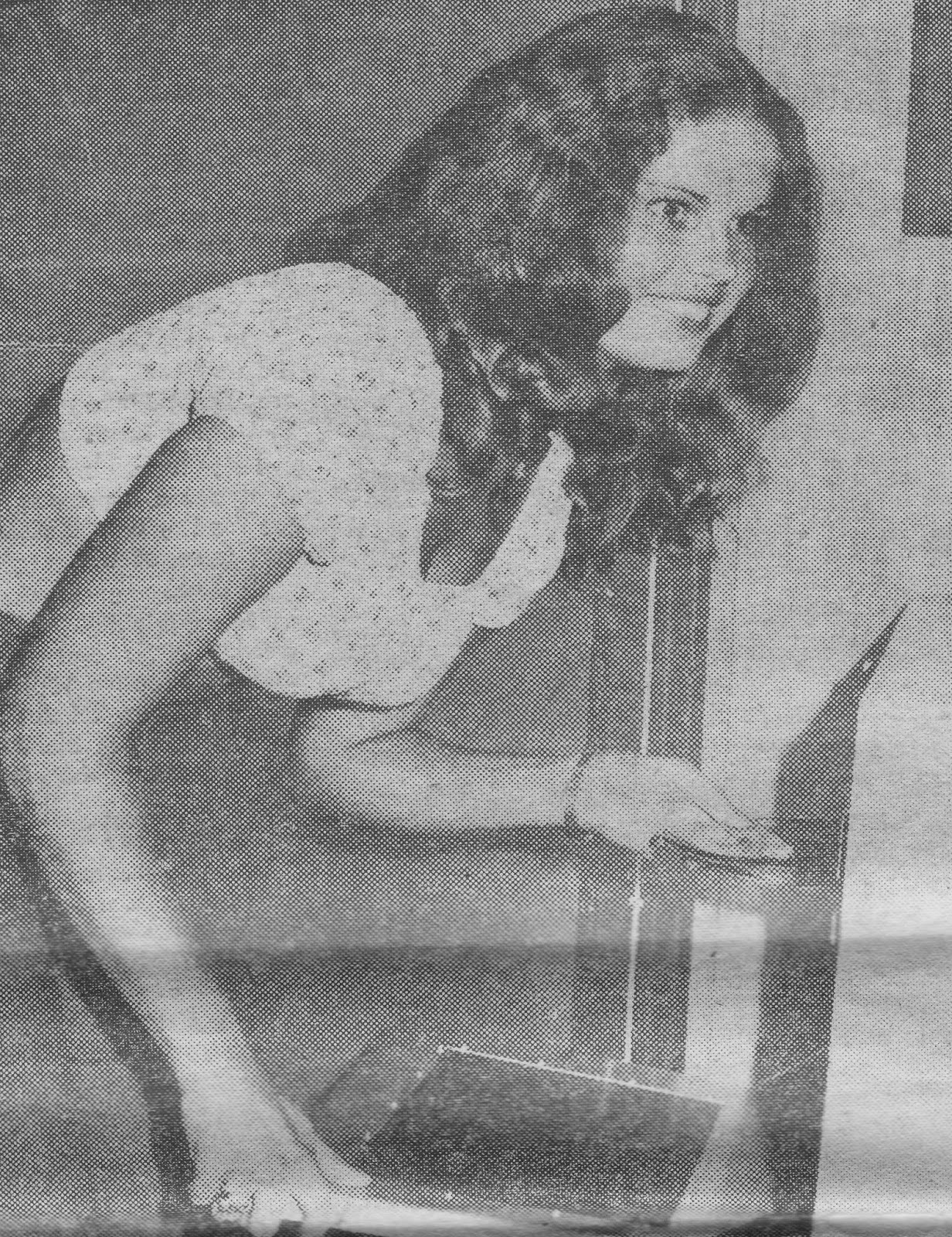 Where is she now?
Sue Henderson, one of five ‘wine wenches’ employed at Bernie’s Wine Bar, 1974
Photograph: The Newcastle Sun

Jackie remembers the place often being crowded, especially on cabaret nights, with people ‘hanging out the doors’.

‘We were one of the few places with a license to stay open till midnight’, Jackie explains. ‘The Star closed at 10 pm, so their customers came on to us after that.’ 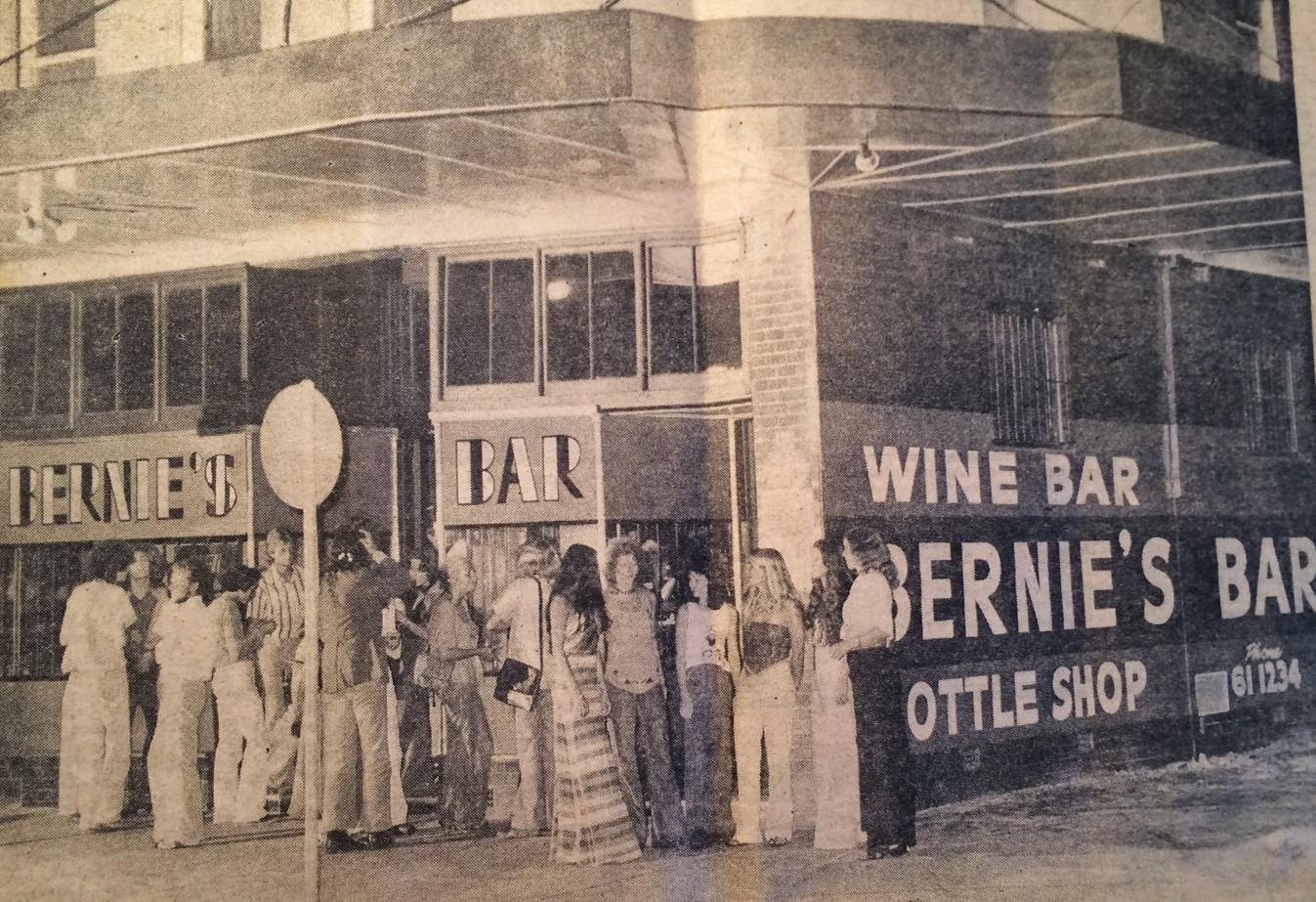 
When I showed Hunter Press publisher Christine Bruderlin this photograph, she pointed to a young woman  wearing seventies flares.

‘That could have been me’, she exclaims. ‘We loved going there. And under age, too!’

‘We had our hippy phase, and our gay phase,’ Jackie says. ‘Then there were the painters and dockers, who were pretty aggressive. But the Hamilton locals sorted them out!’

For Keith and Jackie, their life phase as bar owners and operators came to an end too, as they went on to do other things. But they set the scene for what was to follow, leaving others to write the chapter of the unique part played by this wine bar in the life of gay Hamilton. 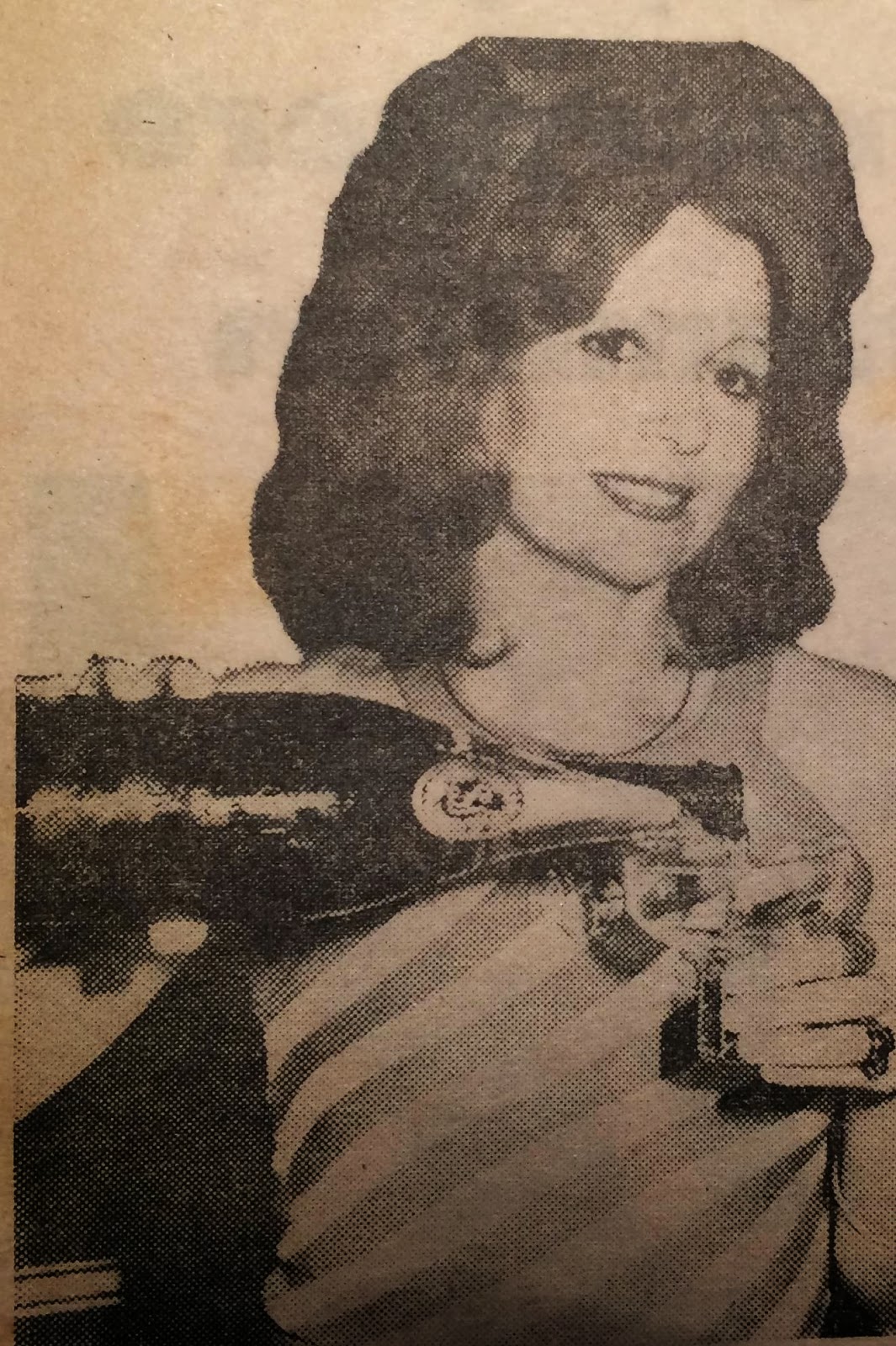 Thank you to Jackie Ansell for sharing this story and newspaper clippings.