As a gift, it wasn’t  quite all it seemed. It was probably the worst piece of land in Hamilton. That’s hard to imagine today, as we absorb the colourful expanses of spring flowering annuals and roses, wander the meandering paths, or watch kids in a playground protected by ancient fig trees.

A big deal was made of it in 1889, when Mr Jesse Gregson, Superintendent of the AA Company, gifted 3.8 hectares of land to the Hamilton Council. The Council had to guarantee to Mr Gregson that the land would be devoted solely to the recreation of workers and their families, and promise to allocate funds for improvement. Was the Council so grateful for this generosity that the reserve was named Gregson Park, in Jesse Gregson’s honour, or was that a condition too? 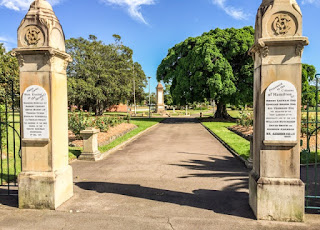 For a start, a stream that was part of Styx Creek flowed right through the reserve, and often flooded. Gregson Park was, after all, within the Hunter estuarine system. The lower south west corner harboured a swamp. It was rough, low lying land covered by ti-tree scrub and weeds.

In 1890 Alfred Sharp of Newcastle - artist, architect, draftsman and landscape designer - won the £10 prize for his design for Gregson Park.[1] However, for reasons unknown, not all his ideas were implemented. Sharp envisaged that the stream would be developed into a ‘serpentine lake with islands’.[2]

Instead, in 1891, Council began filling in the waterway with garbage and street sweepings, taking care to cover each layer with ‘clean material’. The creek was eventually drained and filled in. In a local example of land reclamation, thousands of tons of earth and other material were, over time deposited in Gregson Park. [3]

John Goodyer was appointed gardener, with authority to travel to Sydney and buy shrubs and trees. Two bridges were proposed - ‘one over the creek at Samdon Street and one bridge at Lindsay Street.’[4] 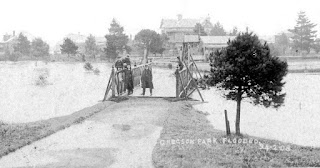 As Gregson Park began to take shape as an urban Victorian park, it quickly became a popular recreational area for the people of Hamilton, as well as a focus for civic monuments.

One of the earliest built structures in Gregson Park was the Hamilton Bowling Club, formed in 1896 – with separate bowling greens and clubhouses for ‘ladies and gentlemen.’ In 2013, almost 120 years of history came to an end when it closed. It is likely the site will be leased for adaptive re-use as a child care centre. [5]

When the tennis courts were built, one court was for residents, the other for teachers and senior scholars at the public school.[6]

Before World War I, in 1905, two 1840s Walker cannons from Victoria Barracks, Sydney were shipped to Newcastle at considerable expense. They were erected in Gregson Park, near the Bowling Club. Later, when this central position was needed for a War Memorial, the cannons  were moved to to the  entrance facing James Street.

One of the cannons in its original position, Gregson Park, early 1900s
The bridge and an early version of the bowling club are clearly visible, with Hamilton School in the background
Photograph by Dr John Turner, courtesy of Newcastle Cultural Collections, University of Newcastle, Newcastle, Australia

After the sudden death of Hamilton businessman Ramsay Gow, his wife Fanny and family presented a set of iron gates with stone posts in tribute to him. The gates would formalize the James Street entrance. Not far away, in Lindsay Street, the former Gow family residence – 'Fettercairn' - still stands. Ornamental public drinking fountains were often a feature of nineteenth century recreational areas. The ubiquitous water bottle wasn’t carried in those days! Often the erection of a fountain would be linked to an important event or eminent individual.

George Donald  was a well known Hamilton businessman, deeply involved in the Scots Kirk, and Hamilton’s first Mayor. The Donald family gifted the fountain in recognition of George Donald’s contribution to the social and political life of the community. 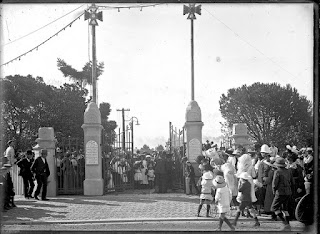 Opening of the Donald Fountain, Gregson Park, 29 July 1908
Drinking taps were located on either side; the stonemason did not record his name
Photograph courtesy of Newcastle Region Library

Gregson Park was the place to be, and to be seen, especially by the well-to-do families of Hamilton. 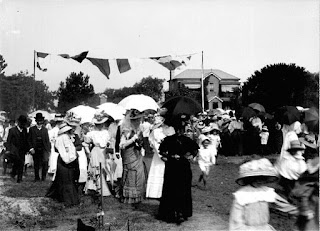 When the gates at the Tudor/Steel Street entrance were installed, Gregson Park was near-complete. These gates commemorated the members of the first Hamilton Council, which had been incorporated in 1871. 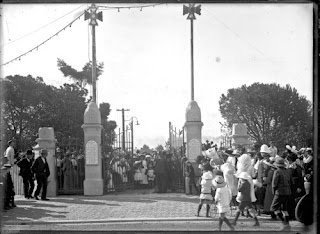 In 1918, visitors to Gregson Park could enjoy ‘19 large flower beds, several lawns, one mile of walks and two of edging.’ [7] A year or so later, a War Memorial was built in a premier position within the park. Dawn services continue to be held in Gregson Park on Anzac Day. 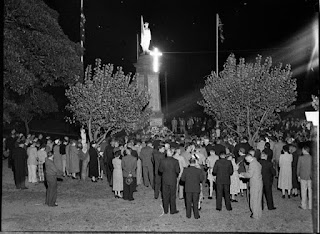 Dawn service, Gregson Park, Hamilton,1957
Floodlighting the memorial for the first time in 1937 attracted a crowd of 7000 people
Photograph from the Hood Collection, State Library of NSW
No known copyright restriction

By 1929 Gregson Park was very well established, and considered ‘the prettiest resort in the suburb and…unequalled for beautiful surroundings in any other part of the Newcastle district.’[8] Better equipment was needed for children to enjoy the park. In 1938, a pavilion and children’s playground was opened by the Lady Mayoress, Mrs J E Wiggins. She declared this was money well spent; the area would be reserved for women and small children. She also suggested the novel idea of the Council employing a (paid) female caretaker who would watch the children in the playground while their mothers went off shopping.[9]

Other installations over the years included a fernery, which seems to have disappeared, and a rotunda. This was demolished in 1940.

By 1966, Gregson Park had ‘three times won its class in statewide competitions,’ tended by head gardener Jim Duck, who farmed near Dungog in his spare time.

Now the children’s playground draws in parents, grandparents and carers throughout the day; the tennis courts are occupied; sometimes you’ll find a band practicing beneath the trees. Anyone can join a casual soccer game on Sunday afternoons - that began in 1989.

Gregson Park puts on her best for the big events like Carols in Gregson Park, Anzac Day services, or May Day celebrations. She will embrace a candlelight vigil for refugees, or a boisterous picnic; she will offer us peaceful spaces to stroll, to soak up some sunshine, or laze on the lawns and drowse. She’s there, for everyone.