The Queen's Arms on Cameron's Hill

He was a man of influence in Hamilton – James Cameron. So influential was he that the locality boasting his hotel, the Queen’s Arms, became known as Cameron’s Hill. Cameron’s Hilll supplanted Winship’s Hill, which had been named for James Barron Winship, a mine manager for the Australian Agricultural Company from 1860. 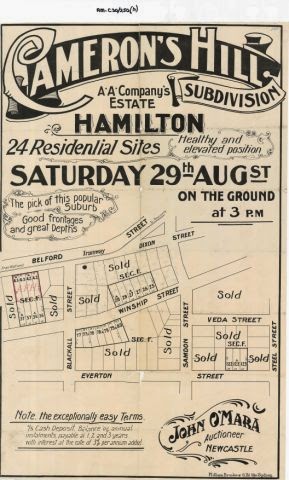 
When I was researching the hotels that flourished in the late 1800s along Denison Street for my blog post Hotel Heyday in Denison Street  I was uncertain about the exact location of Hamilton’s second hotel, the Queen’s Arms. More than a year later, Helen Cramp contacted me with information that confirmed its location, and added rich detail to the Cameron story.

James Cameron owned three blocks of land on the western brow of the hill, from 188 – 192 Denison Street. The property is described as:

‘Allotment of land situated Hamilton having a frontage of 127 feet 9 inches to Winship Street by a depth of 300 feet through to Belford Street, with a frontage of 64 feet 9 inches to that street. The erections thereon consists of brick building containing eleven rooms and two rooms in wood together with stabling of wood and iron, known as the Queen’s Arms Hotel’. 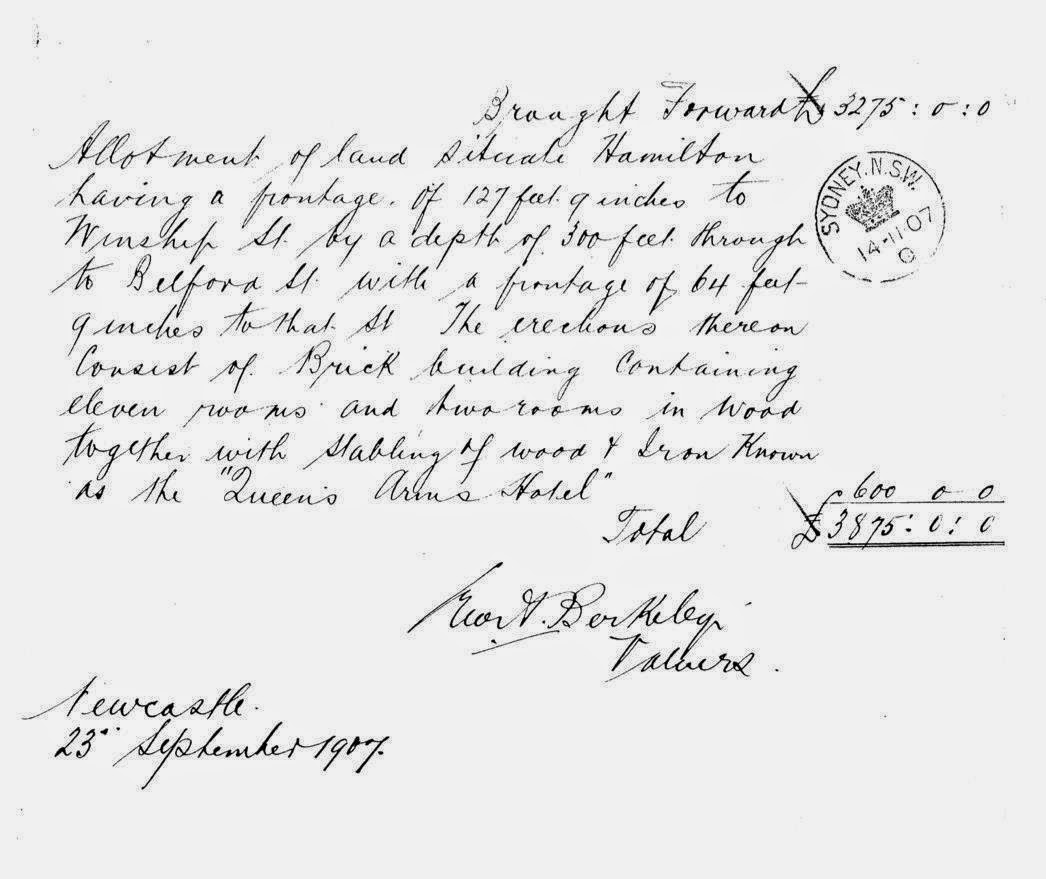 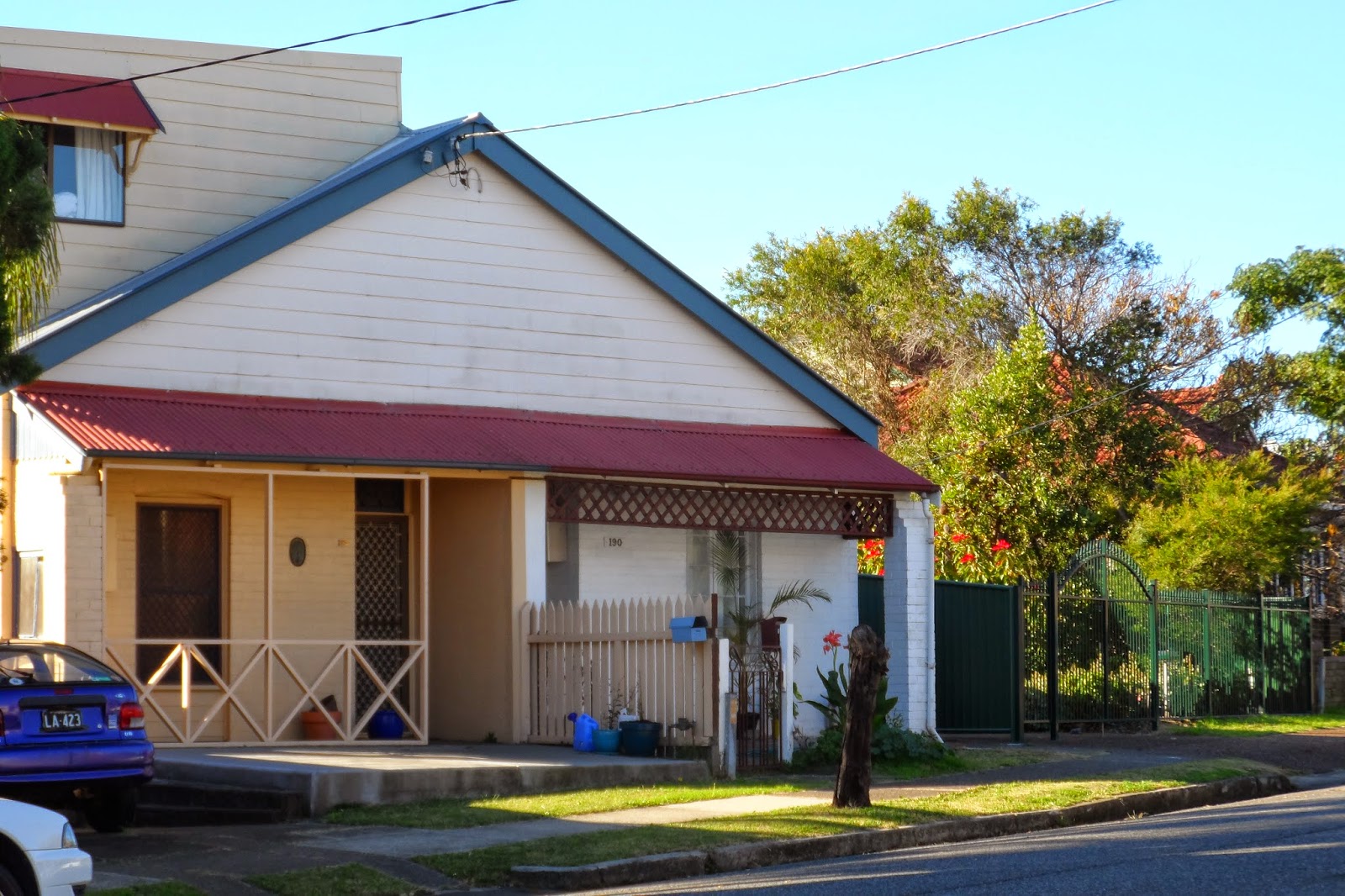 The fronts of these homes at 190 –192 Denison Street are said to retain some of the brickwork from the original hotel.

Next door, 188 Denison Street, was thought by owner Helen Cramp to have been on the site of the stables. The house was rebuilt by Marjorie Cramp in 1989. Daughter Helen remembers it was not uncommon to unearth horseshoes as she was gardening at the back. 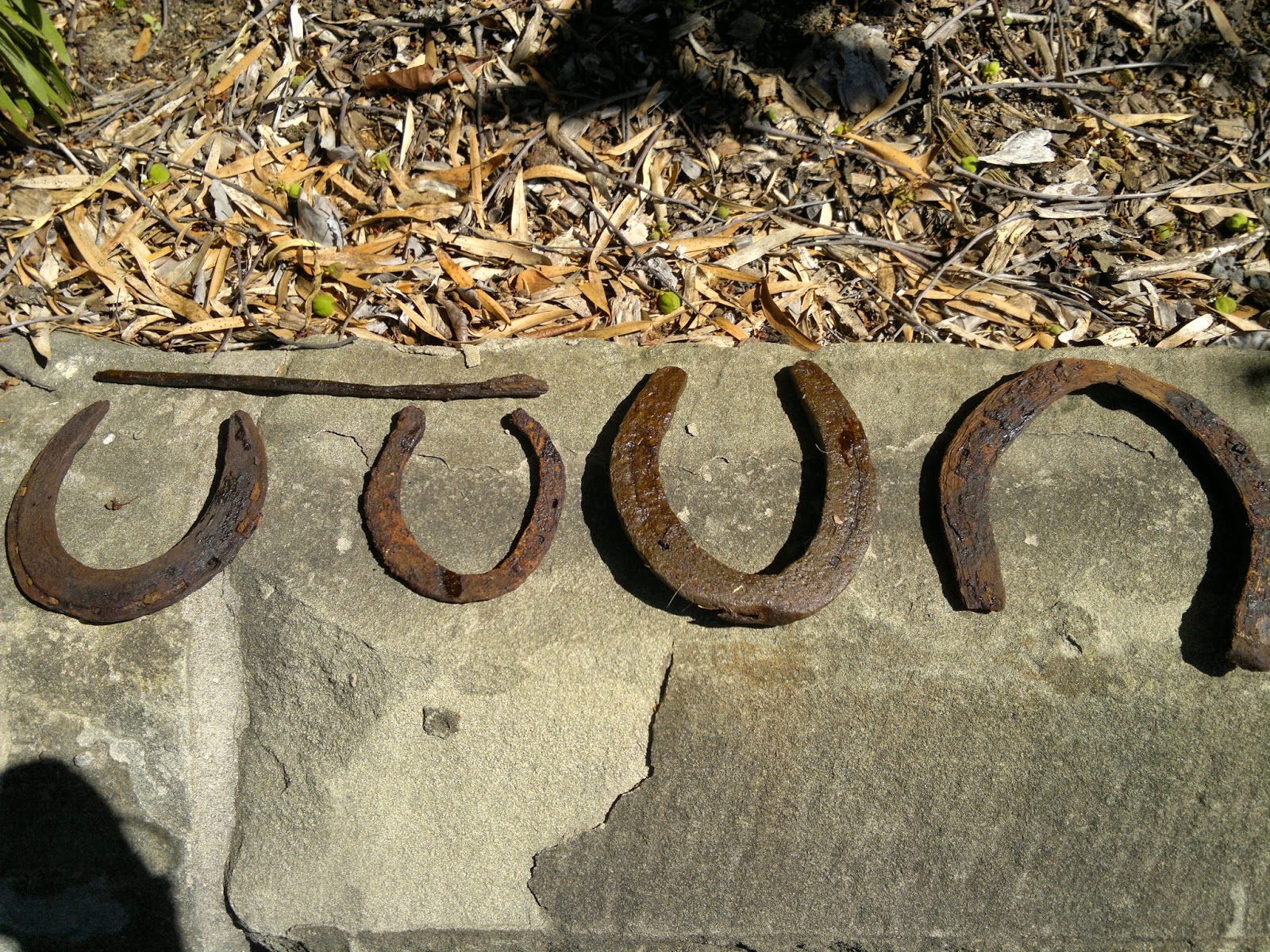 Horseshoes, deteriorating with age, from the site of the stables
of the Queen’s Arms.

Helen grew up on Belford Street, next door to the house that had been the Cameron’s family home. She remembers a gracious brick house with steps leading up to a curved front verandah. The house remains, although much has changed. 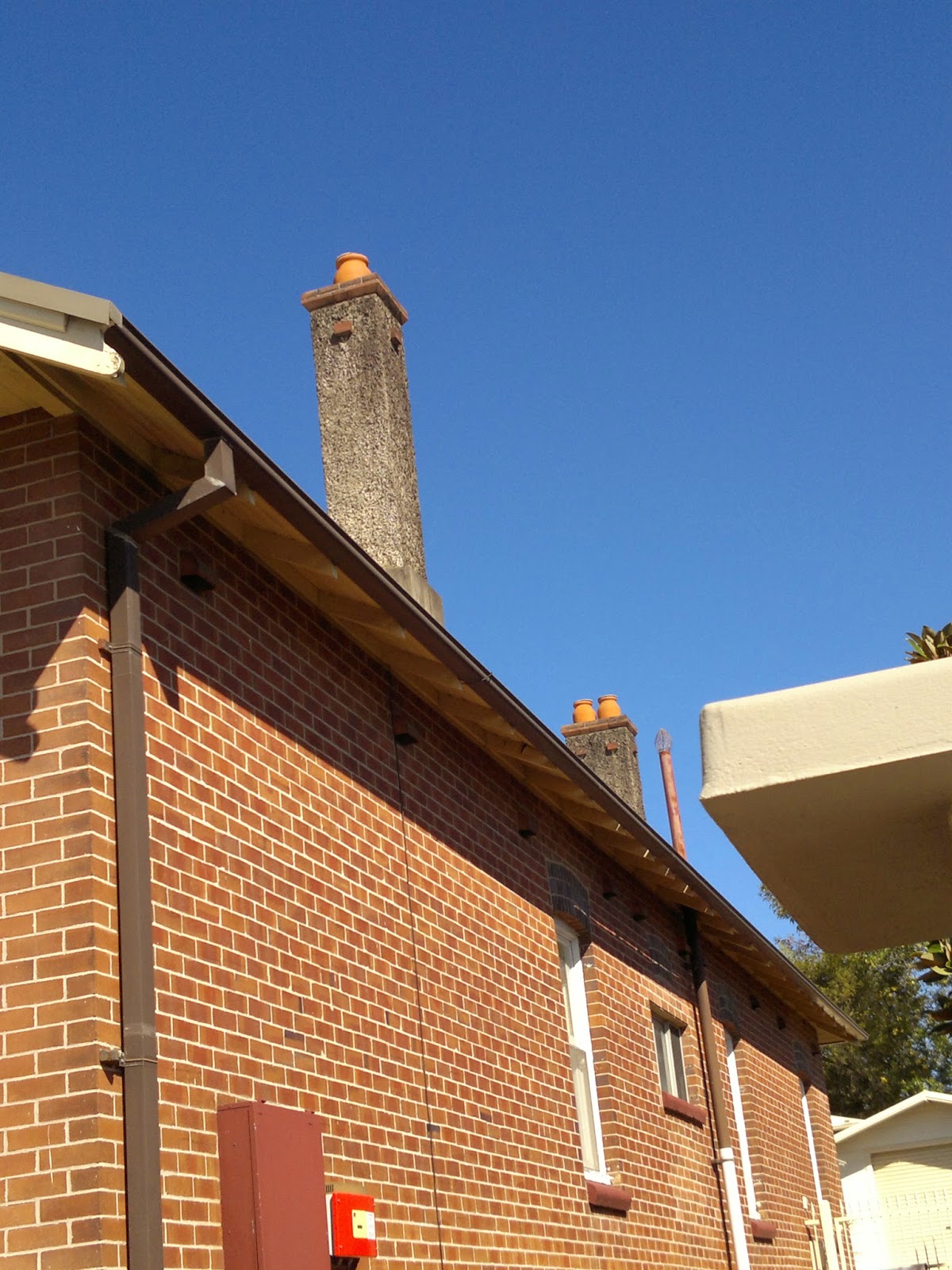 Chimneys more than a century old can still be glimpsed on the now renovated former residence of James Cameron, in Belford Street, Hamilton.

Who was James Cameron?

James Cameron migrated from Scotland in 1838 aboard the ‘Brilliant’, one of the ships brought to Australia by Presbyterian clergyman John Dunmore Lang, carrying impoverished Scots displaced by the Highland Clearances. Cameron had some experience in farming, and as a butcher. With wealth from the goldfields, he arrived in Borehole in 1856, building the Queen’s Arms soon after. It began trading in 1859.

Cameron was a keen sportsman, encouraging local sporting events like athletics and foot racing. His great love, it seems, was racing – local historian Peter Murray notes that Cameron was President of the Newcastle Jockey Club for 25 years. He bred, trained and raced horses, and the Cameron Handicap was named for his son James George Cameron. [2]

A horse bus service to Newcastle operated from the Queen’s Arms
Unsourced image reproduced from Peter Murray, 2006,
From Borehole to Hamilton Jubilee, 1848-1921

When tax was levied on deceased estates, the administration letters provide a list and valuation of every conceivable item belonging to that person. Those listings reveal their net worth and indirectly, their social standing.

James Cameron had invested in real estate in Newcastle and Maitland, and collected rent from his properties. Horse buggies, harnesses and bridles were included in his estate, no doubt relating to the horse bus service he operated. At the time of his death, James Cameron owned another hotel, a two story brick building known as Cameron’s Family Hotel. It was

However, it is the list of ‘household furniture and effects’ that I found so moving, as it lays bare the state of family’s domestic life. From the extensive list, it seems the Camerons lived quite comfortably. Among James’s personal assets were a family Bible, an Austrian chair, elephant ornaments, a biscuit barrel, a teapot, a meat mincer, a meat safe, and a piano. How distressing it must have been to have a stranger come into the home  when a family has just lost its breadwinner, to assess every item in the house for taxation purposes. 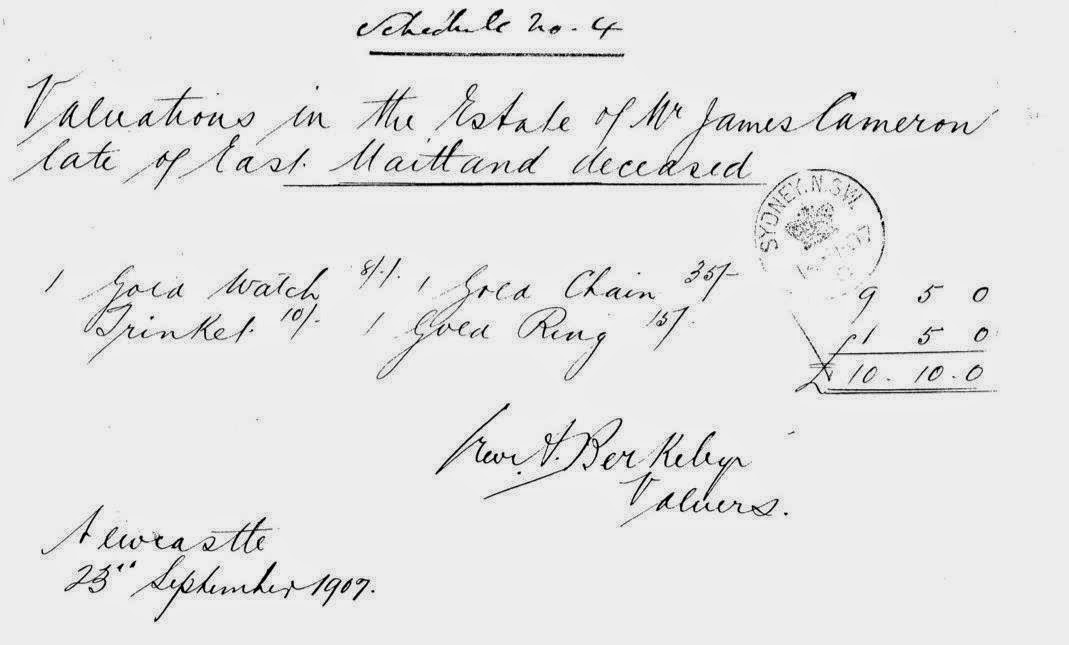 As Helen Cramp was growing up next door to the Cameron’s old home in Belford Street in the late 1960s, she remembers the two elderly ladies who lived there – sisters Elizabeth Sharp and Louisa Sharp. They had married brothers, and came to live out their widowed years in the inherited family house.

Helen’s family was regularly invited into their home to watch television on Friday nights. The Sharp sisters decided what programs would be watched, and no doubt enjoyed the company. In a commercial break they served Helen’s parents tea, and the three children cordial and mixed lollies. I asked Helen if she remembered anything about the inside of the house.

‘Just that it was huge, and dark,’ she told me.

One of the Sharp sisters – Helen can’t recall which one – had had an arm amputated at the elbow, as a result of a fall from a fence.

Now, Helen is researching the Cameron family. Through her work and connection with the land they owned, even the horseshoes she’s dug from the earth, we have a tangible to link to Hamilton’s second hotel, the Queen’s Arms, to its owners and to its past. 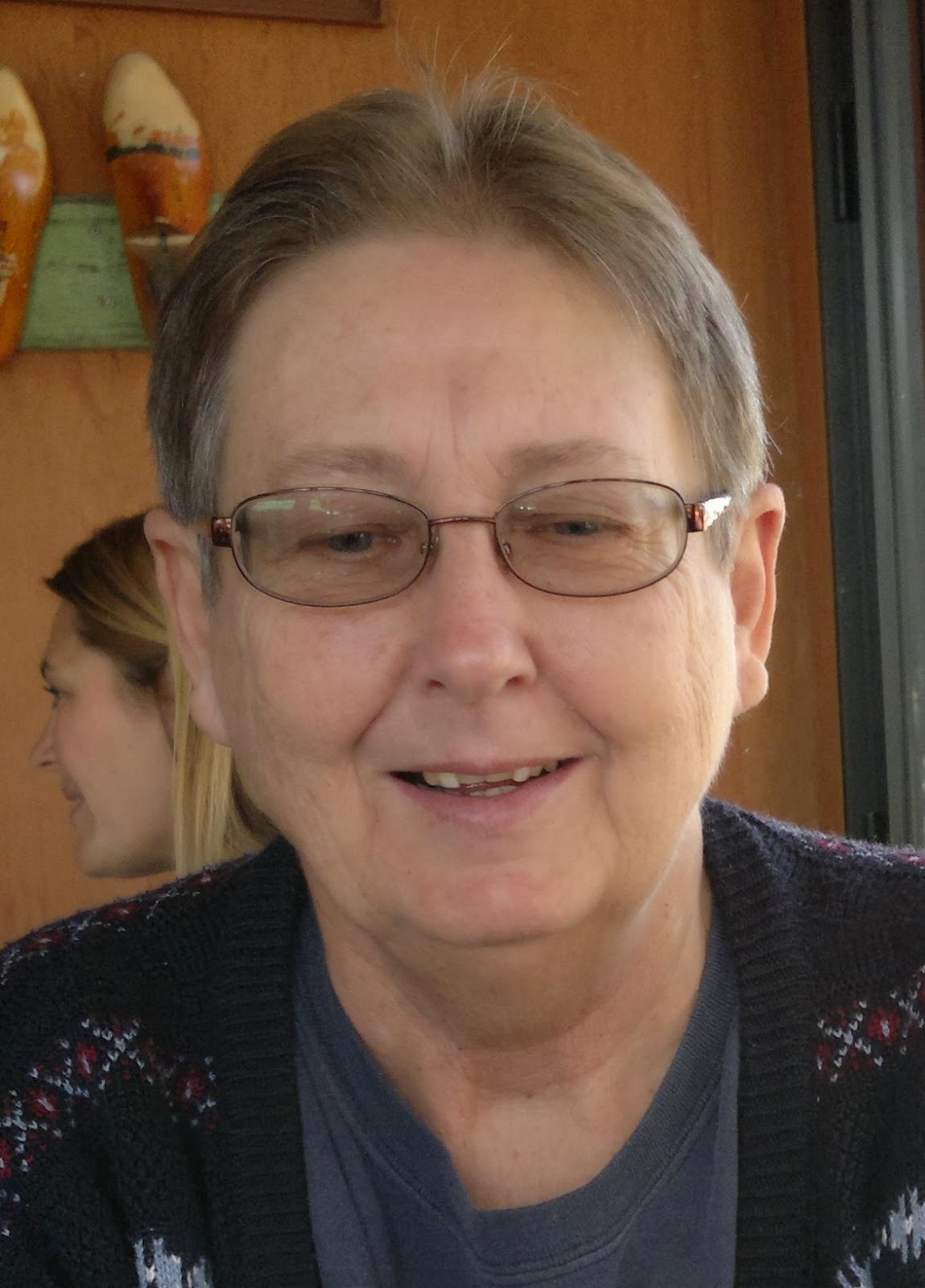 
If anyone can add to this story, please email hiddenhamilton@gmail.com


Thank you to Helen Cramp for sharing the results of her research, and to Margaret Haigh for providing further information and images.