The secret ingredient to Blue Heaven milkshakes is one that Mervyn Roberts has kept all his life.

‘And it will die with me’, he chuckles.

Blue Heaven is the flavour that ‘Losties’ on the Lost Newcastle Facebook page mention often – ‘do you remember Blue Heaven?’ ‘what was in it?’

Jim’s Dairy Delite Bar, Hamilton opened in May, 1957 on the corner of Tudor and Webster Streets. Merv, now 87 and fiercely independent despite some recent health scares, is the only survivor of three business partners. 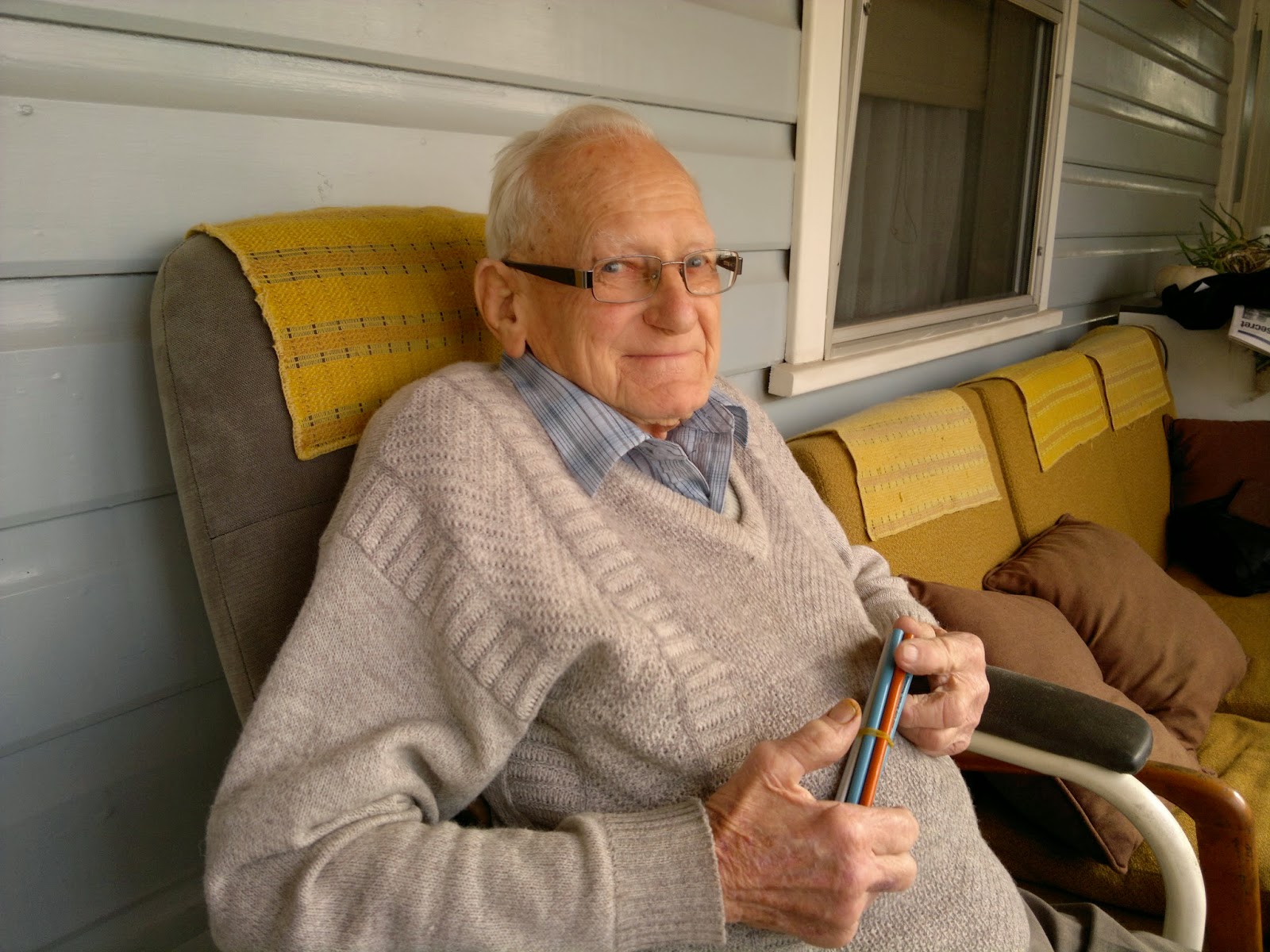 Merv grew up on a farm and had trained as a baker in Manilla, in northern New South Wales. However, constant exposure to flour particles affected his health. In Newcastle, Merv found work with Allen’s Sweets. Allen’s distribution centre operated from what had been Pearce’s Premier Bakery in Webster Street, Hamilton. (Read the story of Pearce’s bakery here.)

Driving an Allen’s delivery van all over town, Merv met many customers. One was Jim Jamison, a qualified accountant and retired bank manager who ran a mixed business. When Jim opened his Dairy Delite Bar around the corner from Allen’s, it didn’t take long for him to lure Merv, an energetic 31 year old, into a working partnership. By then, Merv had a wife and 6 year old daughter.

‘That meant a wage, plus commission’, explains Merv.

‘Ray knew a lot about refrigeration,’ says Merv, ‘and over the years, saved us heaps of money. Jim had a head for business; he was the brains.’ 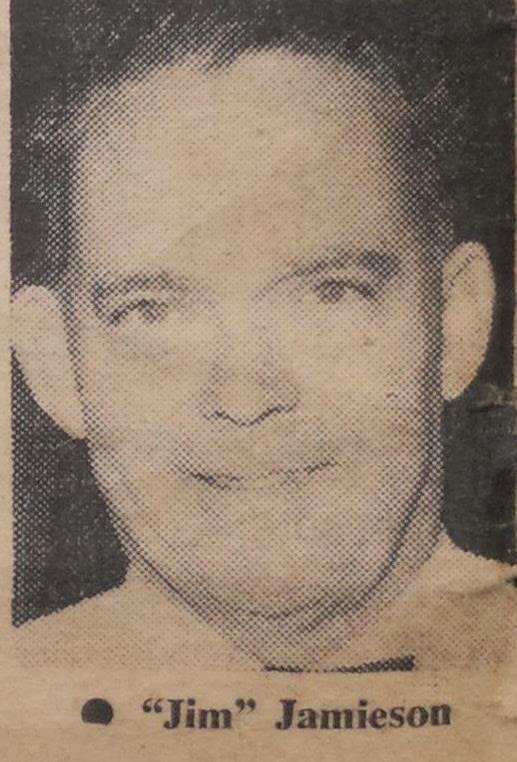 
Merv and his wife Bonnie became full partners with Jim when he established a Dairy Delite bar on the corner of Maitland Road and Woodstock Street in Mayfield. Bonnie had been running a bar selling freshly crushed pineapple juice, coffee and soups in the Newcastle Arcade. It was sold (for 1600 pounds) to finance the Roberts’ share of the Mayfield shop. That opened in November, 1962, and like the Hamilton one, became something of a legend. Similar shops were later opened at Cardiff and The Junction.

‘Dairy delite wasn’t pure ice cream,’ Merv explains.’ The Health Department was always onto us, making sure we didn’t label it ice cream. It was a kind of soft serve, put out by Dairy Farmers. When McDonalds came to Newcastle, they did a deal with Dairy Farmers and we couldn’t sell it any more. We went to Peter’s.’ 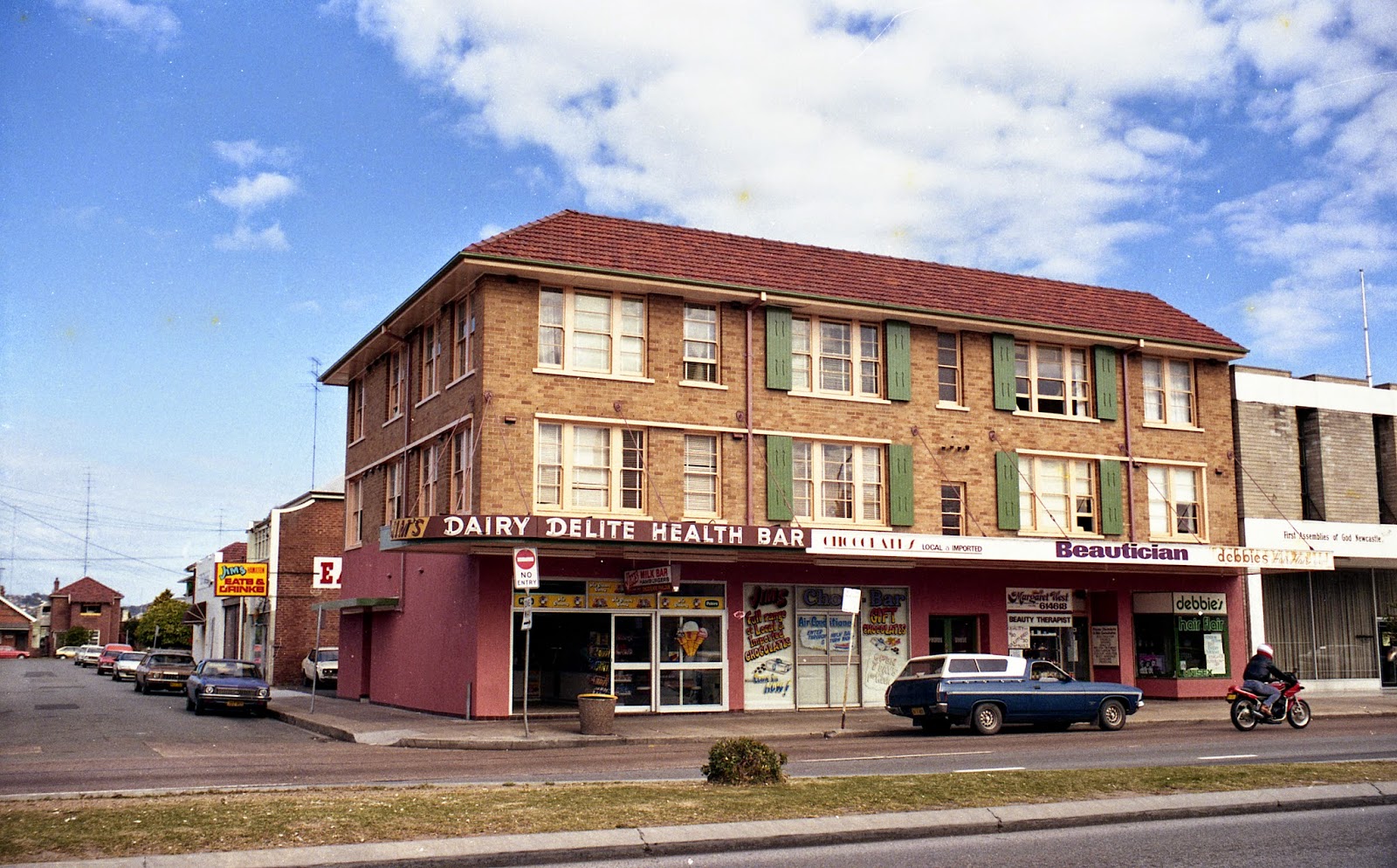 Whenever Jim’s is mentioned on the ‘Lost Newcastle’ Facebook page, it attracts a fresh wave of comments. Noel Santleben wrote – ‘They made the best milkshakes in town – almost impossible to suck it up through a straw – you really had to work for it’.

While favourites were spearmint malt, choc malt, doube choc malt (with a dash of vanilla), lime, banana, passionfruit, even pineapple, the stand out winner was Blue Heaven.

Susan Watt–Dunne loved Blue Heaven with nutmeg. Marion Kracke exclaimed – ‘it was like you were in heaven when you drank it!’

When Gail Jason told how her mother used to get her warm lime milkshakes – ‘the best ever!’ -  Brian Agland responded:

‘Gail, I’m so glad you mentioned warm milkshakes. No one else remembers them and I was beginning to doubt myself. Mum would send us to Jim’s Hamilton after school on a wet day for a warm milkshake. They would make a milkshake and steam it.’

Chris Blatchford, who grew up in the Blatchford family of bakers and is now an executive chef in Sydney, remembers riding his skateboard from the bakehouse on nearby Denison Street. He would have orders for staff like ‘surf thick shakes’ – double everything – ice cream, malt, and flavouring.

As well as milkshakes, thick shakes and bottled drinks, Jim’s at Hamilton sold boxes of chocolates, Easter eggs, and snacks such as hamburgers, salmon patties and hot chips. The side door opening onto Webster Street became the entrance way to the snack bar.

In 1968 the tiny snack bar was expanded into a 60 year old house at 4 Webster Street – the one baker Sydney Pearce had built for his family as he’d become more prosperous. The opening warranted a two page feature in The Newcastle Sun (Tuesday June 11, 1968), with congratulatory advertisements from builders, plumbers, gasfitters, floor sanders and tilers, as well as suppliers of kitchen equipment, signs and lighting, greengroceries, smallgoods and bread. 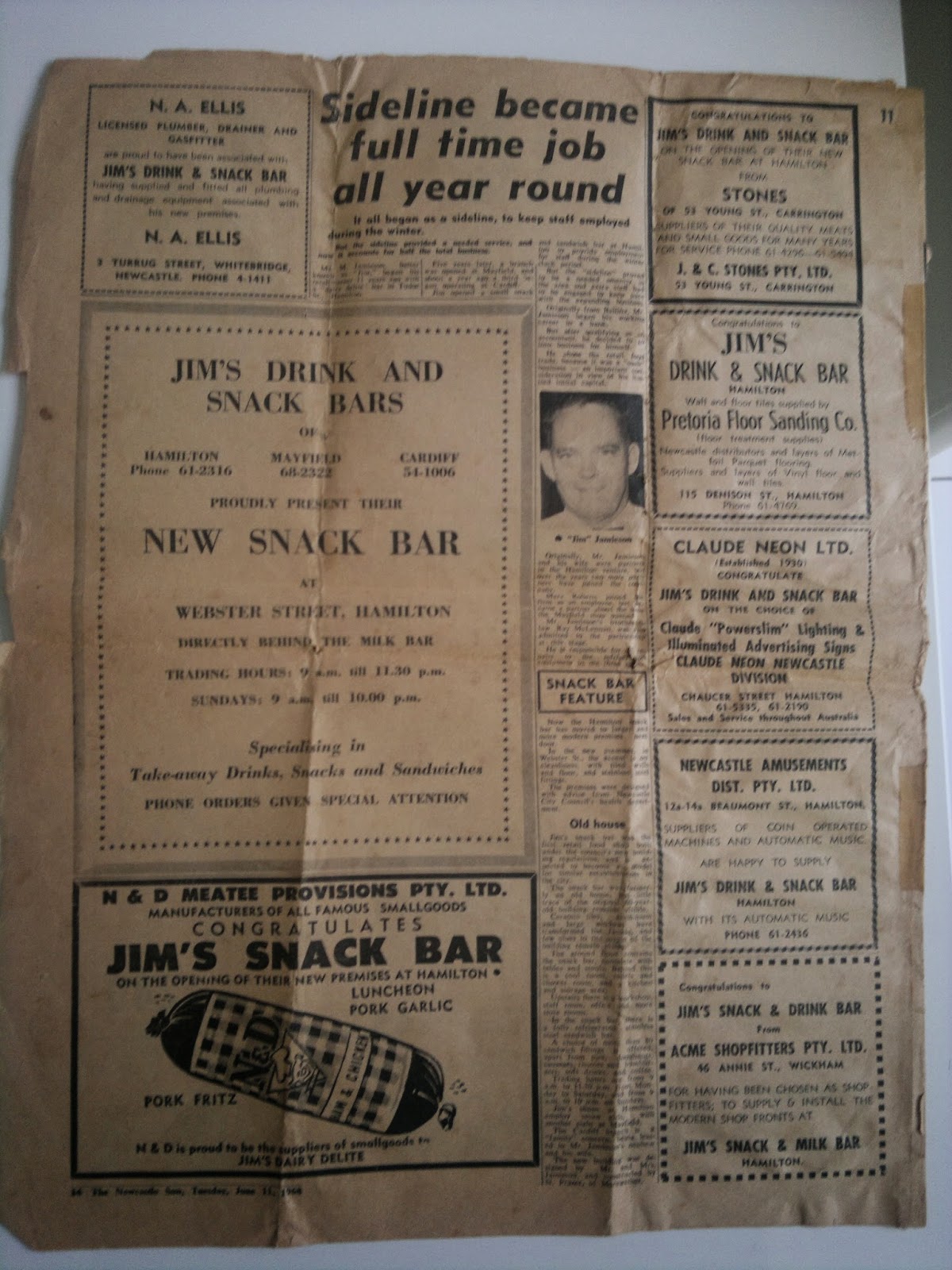 Feature article on the opening of Jim’s Snack Bar at Hamilton, a model for similar establishments in Newcastle
The Newcastle Sun, 11/06/1968 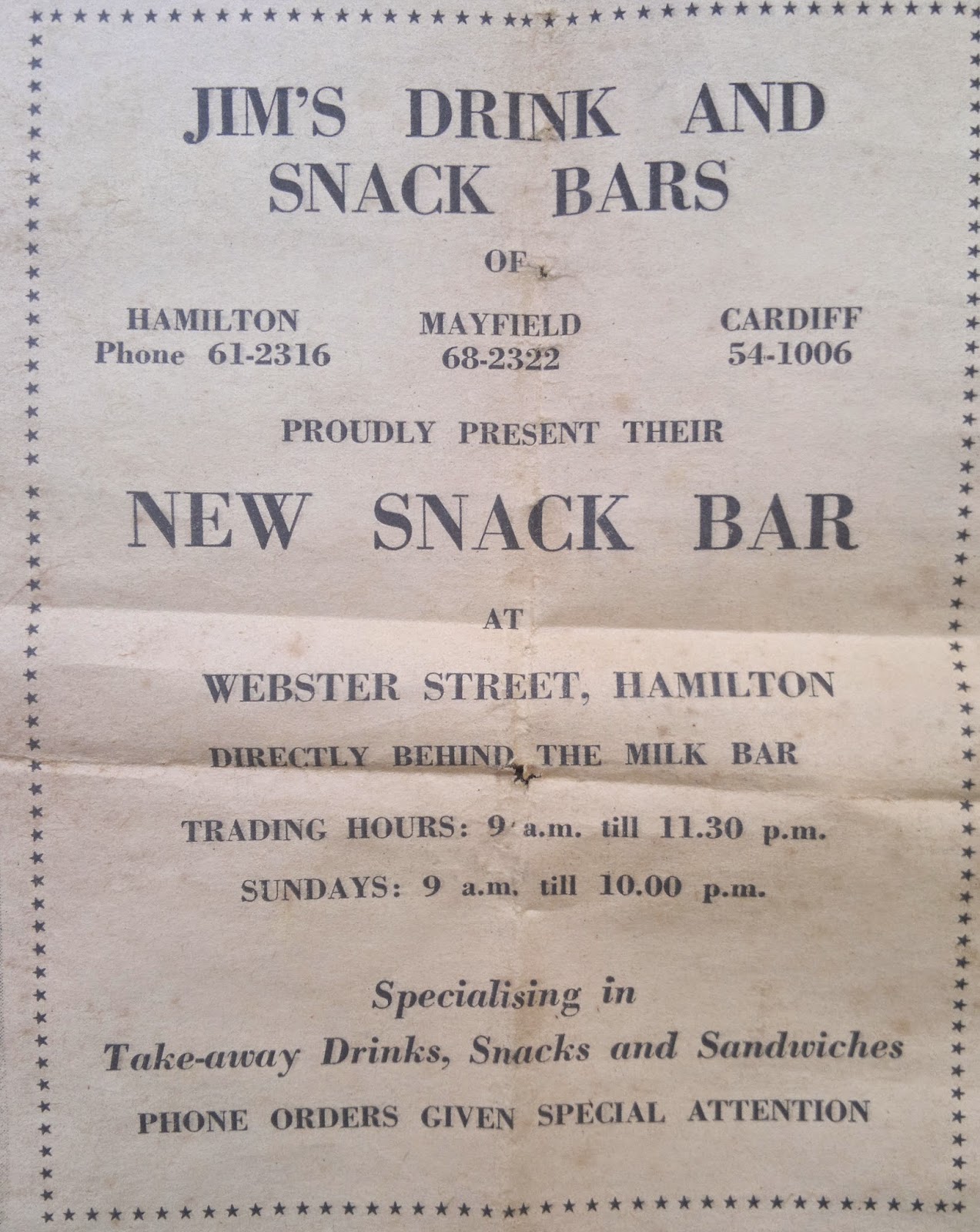 Advertisement for Jim’s drink and snack bars
The Newcastle Sun, 11/06/1968

The façade of the old house was transformed with large aluminium windows and ceramic tiles. The Newcastle Sun describes the layout:

‘The ground floor contains the snack bar, complete with tables and stools. Behind this is a cool room, toilets and shower room, and a kitchen and storage area. Upstairs there is a workshop, staff room, office and more store rooms’.

I learned from the article that when it first opened, a choice of more than 80 sandwich fillings were offered! As well as pies, donuts, sausages, rissoles and hamburgers, soft drinks and coffee.

How was it that the snack bar, clearly an impressive venture with leading edge equipment for its time, no longer operates – but the ice cream and milkshakes sold at Jim’s continue to attract customers?

The former snack bar has reverted to a private residence.


Merv Roberts retired in 1992, just before he turned 65. He’d done everything in the shops, from mixing syrups to helping cook on Sundays. 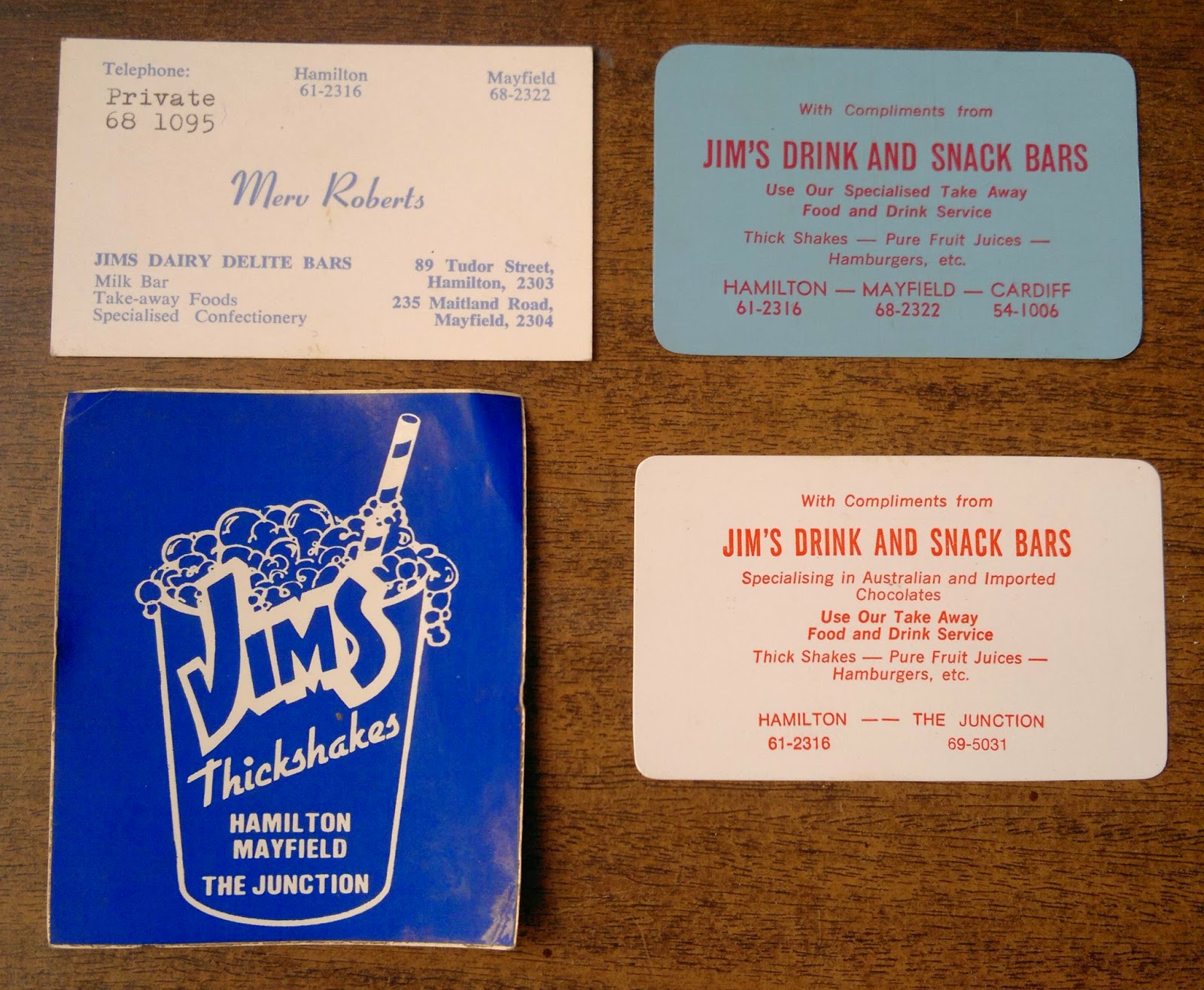 It was the people he enjoyed most about his work. ‘Johnny Farnham came once,’ he tells me. ‘And then in 1962, when NBN opened, the Dairy Farmers marketing people approached me to appear on the Norman Brown Three Cheers show. At the end, when the credits rolled, all the kids lined up for ice cream. I served.’ Daughter Annette remembers standing beside her dad, handing out ice creams. 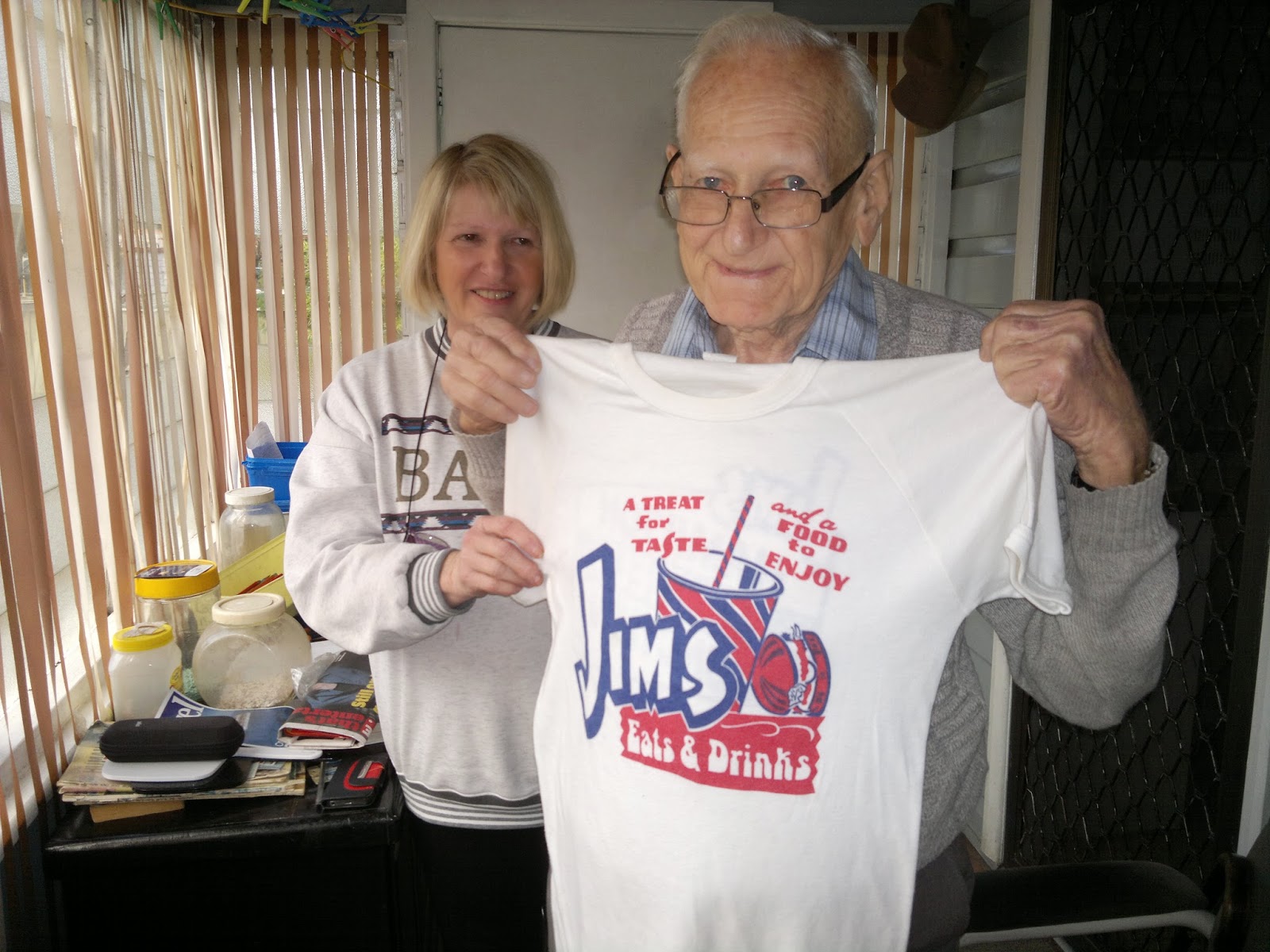 Because the bar was ‘Jim’s’, Merv often got called Jim. A couple of times, I had to catch myself, about to do the same. It is obvious that this easy going farm boy from Manilla would have been a friendly presence in any retail setting.

Brian Agland  remembers Mervyn very well: ‘A distinguished looking man with the patience of Job. We kids were always undecided because having a Jim’s milkshake wasn’t a common occurrence, and we certainly made the most of the experience’. 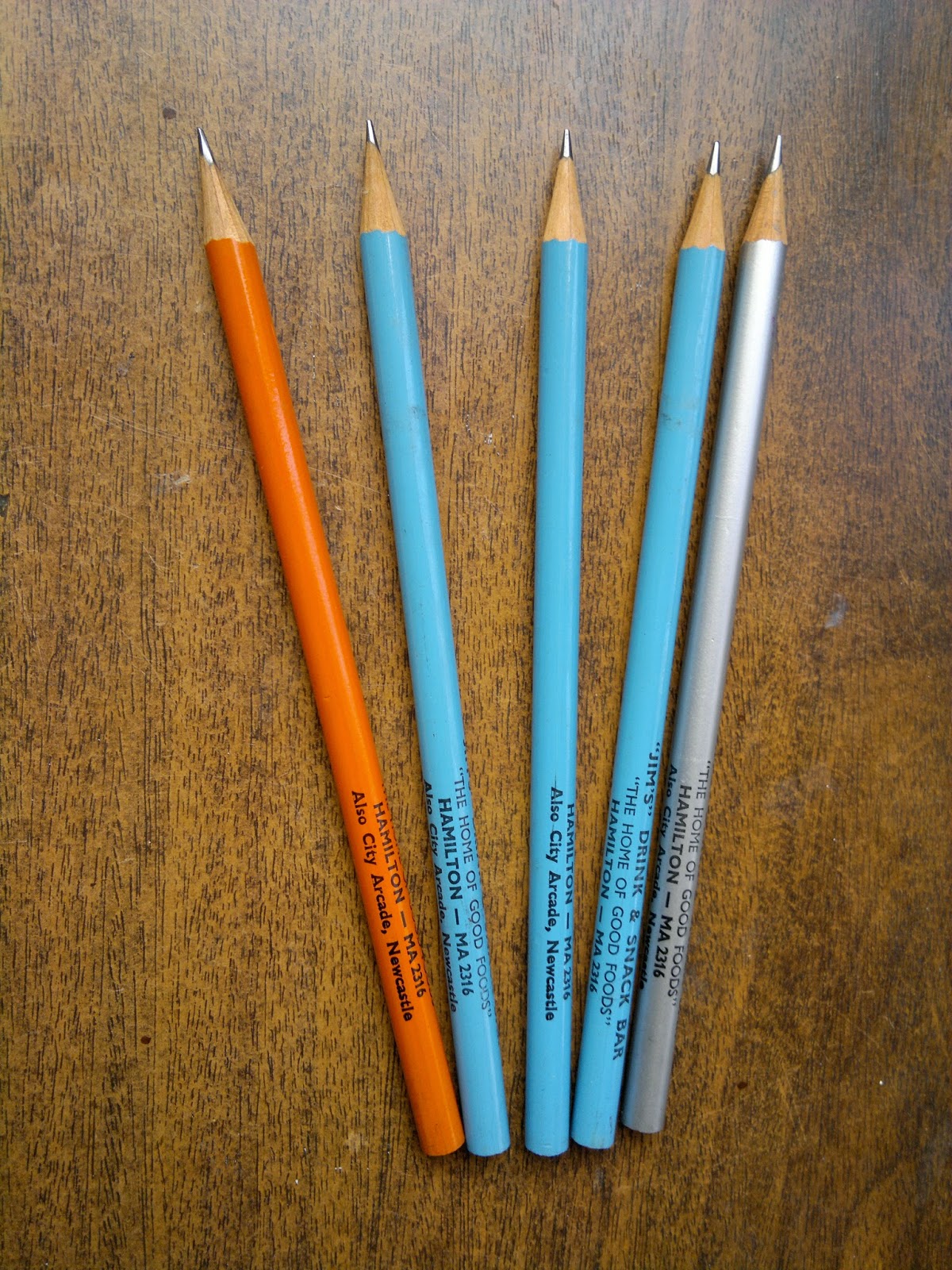 I can reveal here that the syrup for Blue Heaven milkshakes is flavoured with cola. Of course, there is blue colouring – and a third ingredient. Jim’s used to purchase essences from a wholesaler Alfred Lawrence. When one of the travelling salesmen phoned Merv and asked for the recipe for Blue Heaven, Merv was canny. He told the salesman about the cola and the colouring, but stopped there.

‘Wasn’t there something else?’ the salesman wondered. 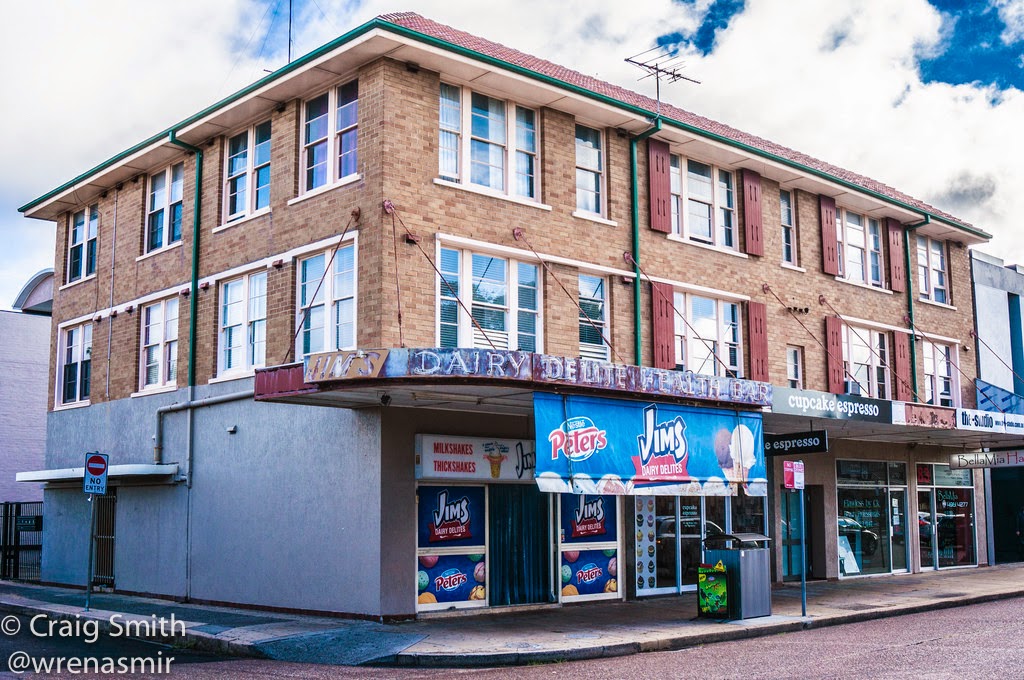 Another building in need of someone to love it –
but the customers still come. Jim’s Dairy Delite Bar, 2014
Photograph by Craig Smith


Acknowledgements
My thanks  to Mervyn Roberts and Annette Roberts for sharing this story, and to contributors to the ‘Lost Newcastle’ Facebook page for their memories of Jim’s Dairy Delite Bar.